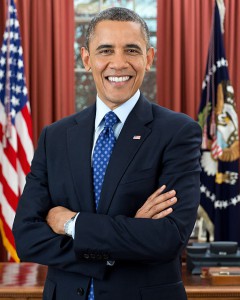 Once again, our psychics nailed their predictions for 2017. Trump survived his first term. Mayor Roger Claar was in a tight election, which he won. Jay Cutler left the Bears, and President Donald Trump had an inauguration so rough that the White House had to lie about it.

Sure, some of the more skeptical bloggers on Freethought Blogs will point out our errors and the things we missed. Chicago didn’t become a part of Canada, and we didn’t predict our move to this blog network.

Predicting the future isn’t an exact science. Still, we think our psychics did a good job, and we hope you will consider their visions for the new year. At least this year, they were able to wake up from their trances without screaming in horror!

So here are our predictions for 2018:

During the Winter Olympics, Trump will decide to launch a nuclear attack. After entering the codes, a message from former President Barack Obama will appear.

“Donald! I knew you couldn’t resist the opportunity to use our nuclear weapons. So, I took the liberty of keeping the real nuclear football and giving you this replica. I can’t let you risk the reputation of this great nation by committing genocide. Well, by committing genocide again. We aren’t perfect. Anyway, you can play with your little football, and I’ll keep our huge stockpile of peacekeepers safe and secure until a reasonable person takes office.”

Obama will go into hiding, while Trump will unleash the mother of all Twitter rants.

During a Bolingbrook Village Board meeting, Claar will try to humiliate Trustee Robert Jaskiewicz – by letting him propose an ordinance with the expectation that the other trustees, who are members of Claar’s Bolingbrook First party, would refuse to second it.

To Claar’s surprise, all of his trustees will second the proposal. After Jaskiewicz gives a short speech, Claar will say that anyone who votes for the ordinance is a foe of Bolingbrook. He will then call for a roll-call vote.

When it is their turn to vote, each Bolingbrook First trustee will struggle to say anything. “I can’t say the ’n’ word!” one of them will cry.

Frustrated, Claar will lash out at Trustee Rick Morales. “You’ve voted no in the past. Why can’t you do it now?”

“You said there is no “no” in a team and if I want to stay on the team, I can never vote “no.” But I can’t vote with Bob. I’m so confused. I can’t tell you to get with the program because you are the program, Roger.”

Jaskiewicz will chuckle. “You’ve conditioned your trustees never to vote no. They can’t overcome it.”

The final vote will be one vote “no,” one vote “yes,” and five abstentions. After the voting, the Bolingbrook First trustees will either be crying, passed out, or reading their trustee reports out loud.

A prominent leader in the atheist movement will file a $1 trillion lawsuit against all Christian dominations.

“I’ve built my career on the fact that Jesus never existed,” the prominent atheist will say. “By promoting the myth of Jesus, these organizations are maliciously attacking my work and raising slanderous questions about my sanity. I have no choice but to defend my reputation.”

The business world will be shocked when Bolingbrook’s Ulta buys UPS. Ulta will then disrupt e-commerce by announcing that they will no longer handle Amazon’s freight.

“Maybe it is overkill to buy a global freight company,” an executive will say. “But something has to be done to stop Amazon from destroying retail sales. Will someone think of the malls?”

Surprisingly, the move will only inspire Amazon to expand its own logistical services. Most of the world will not see any disruptions in deliveries.

“We’re so big that the economy bends to our will,” an anonymous Amazon executive will say. “Soon every American will either work for us or work to support us. In the end, there can be only one corporation. Let it be Amazon!”

We get letters: HJ Hornbeck and other matters (Fiction) » « Clow UFO Base survives holiday concert (Fiction)