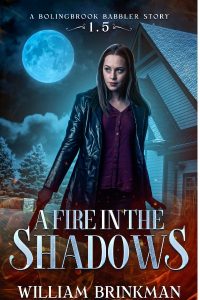 A Fire in the Shadows: A Bolingbrook Babbler Story

My upcoming novelette, A Fire in the Shadows: A Bolingbrook Babbler Story, releases on 3/7/23, but you can preorder it now for only $.99.

Bolingbrook has long been rumored to be a hub of paranormal and alien activity and Lydia should know—she’s a vampire. But that doesn’t mean she fits in. Not when she’s a target for other vampires and reliant on her blood family’s protection because of her inconvenient inclination to experience feelings.

Except right now, Lydia has bigger things to worry about than her recent rejection by a human or her blood sister Aurora’s relentless teasing. An army of weredeer are gathering near town and they need to gather intelligence fast.

When enforcers from one of Chicago’s vampire kingdoms threaten the Bolingbrook Babbler’s stunning chief editor, Aurora accuses Lydia of having feelings again. But even if Lydia does have a crush on the unsuspecting Sara, she deserves their protection.

Only Lydia hadn’t counted on how powerful their enemies are. Or the sort of unexpected revelations that will come to light if Lydia dares to risk rejection again…

If you’re interested in a vampire story with a neurodivergence as theme, an LGBTQ+ main character, and/or a story with a twist on the paranormal protector trope, then you should checkout A Fire in the Shadows. I promise the vampires do not sparkle, nor are they mindless killers. While there is a romantic element in the story, it’s not in the romance genre. It’s more about Lydia’s isolation and her strong desire to connect with someone.

While it’s Book 1.5 of the Bolingbrook Babbler Stories, you can read it as a standalone book. In the overall series, it takes place years after Pathways to Bolingbrook, and occurs parallel to the events in The Rift. It’s also has more action than Pathways and The Rift. While this is a relatively short book, there are more Bolingbrook Babbler Stories to follow. You can preorder A Fire in the Shadows at Amazon and other retailers.

Will Lydia’s compassion be her downfall? Preorder now to find out.

I hesitated to join Mastodon because I wasn’t sure which instance to join. Once I had an account on FO, I found the interface easy to navigate. While it’s like Twitter, it feels more like a micro-blog site. It’s possible to express an idea without breaking it up into 20+ posts. I’ve started slow, but I plan on posting more content as I get used to it.

Even if you don’t join, HJ has a list of decent Mastodon users, including Jennifer Ouellette and Neil Gaiman.

Freethought.Online is open to bloggers and FTB commenters in good standing. If you want to join, here’s the process.

This of course creates a problem of verification. The bloggers side is easy enough, but what about all you commenters? Mastodon does have a verification system in place, but it’s easily thwarted by a comment section that allows linking. No, instead we’re going to take advantage of the fact that, in order to comment here, you’ve got to supply an email address. That email address will be your key to the magical world of Narnia our Mastodon instance.

You, though, may not want your FtB handle to be your Mastodon handle, and for that matter you may not care about Mastodon at all. No problem, we can take advantage of my comment section to make the process opt-in. Post a comment there with the following info:

DO NOT POST YOUR EMAIL ADDRESS. You don’t want the ensuing spam, and I can read your account’s email off my administration panel. It’s not the one you want to associate with Mastodon? WordPress allows you to change your address. Once I get around to it, an email will arrive at that address with further instructions on what to do. Don’t worry if your comment doesn’t pop up, there’s a good chance it went in to the spam folder. I’ll know to be on the lookout.

There is a bit of a wrinkle: all the blogs on FtB are semi-autonomous. I’m not convinced that the username on one links up to the same username on another, so impersonation might be possible. Just to be safe, let’s add one more step: after your request, you’ll need to make a comment on your “home” blog verifying you’re the real McCoy. The simplest way to verify is something like “hey guess what, I have a Mastodon account at [a link to https://freethought.online/@your_user_name]!” in less than two days, but that’s uncomfortably similar to advertising. We’re not fans of that around here. Since I have to write a comment back when I fire off the email anyway, to help you detect if it got lost in a spam filter, I can give you a few randomly chosen words. Slip those into your most recent comments within 48 hours, and you’re in. Slip up, and you’ll be bumped to the bottom of the queue.

I hope to see some of you there, or from another instance. The Federation has room for all descent beings. 🙂

Did aliens help the Jacksonville Jaguars come back from a 27 point deficit to defeat the Los Angeles Chargers? Officials at Bolingbrook’s Clow UFO Base are investigating.

Bolingbrook Mayor and Clow UFO Base administrator Mary Alexander-Basta told the interstellar media, “We’re just asking questions and detaining the ones who need a little help answering our questions.”

Following the Jaguars’ improbable victory, Clow UFO Base halted all departures, and ordered all craft in Bolingbrook’s zone of control to land. Clow officials then started interrogating all their alien visitors.

Lokgoz, from the TOI Hive, denounced his interrogation: “They kept asking me if I’d used a mind block on a football team. At first, I thought they were talking about the World Cup. Then I realized they meant the game that I call throw ball. Then they said they had pictures of my craft flying by the moon during the game. They promised to charge me with a lesser crime if I confessed. I didn’t fall for that because they don’t decide punishments. Mayor Mary does, and she wasn’t in the room.”

Inko, who asked that we didn’t identify their home world, accused Clow officials of using intimidation tactics: “I told them I bet all of my free credits on the Chargers. Why would I want them to lose? That’s when I found out gambling is illegal inside Clow. They lock me up, but I will never say what they want to hear.”

The receptionist for Alexander-Basta said she was out of the office.

In the background, a man who sounded like Trustee Sheldon Watts said, “I’m almost afraid to ask what your plan is.”

A woman who sounded like covert social media operative Charlene Spencer replied, “May plan is to get First Party supporters so obsessed with the DuPage Township board, they’ll miss the election.”

“That’s a ridiculous plan. No one outside of Edgar County is obsessed with any township.”

“Oh, that’s where you’re wrong. Watch this. The DuPage Township trustees did something!”

A woman yelled: “Outrageous! I have to tell Bolingbrook Politics! We need to stop them before it’s too late.”

The woman ran away, and Spencer said, “Now I just need to find a write-in candidate, and (the Bolingbrook Independent Voices party) will sweep the Village Board election!”

I am also the author of The Bolingbrook Babbler Stories. For book updates and a free ebook, sign up for my newsletter. Pathways to Bolingbrook, A Fire in the Shadows, and The Rift are available at Amazon and elsewhere. You can support my work by buying one of my books.

A Fire in the Shadows: A Bolingbrook Babbler Story

The next book in my Urban Fantasy series, The Bolingbrook Babbler Stories, is A Fire in the Shadows. in the story. It’s the direct sequel to Pathways to Bolingbrook and leads into The Rift.

She wonders if Sara, the editor of the Babbler, could be the one who ends her loneliness. Lydia sees so much in Sara, yet fears Sara will reject her for being a monster.

When vampire enforcers from Chicago threaten to capture Sara, Lydia feels compelled to defend her. She’s a skilled fighter, but that might not be enough to defeat them. Will Lydia risk her immortality to protect Sara?

I will release a Fire in the Shadows on 3/7/23. Look for my preorder announcement later this month. I might also add a special preorder incentive.

In the meantime, if you want to get my updates about my books delivered to your inbox, you can subscribe to my newsletter. I update it at least once a month.