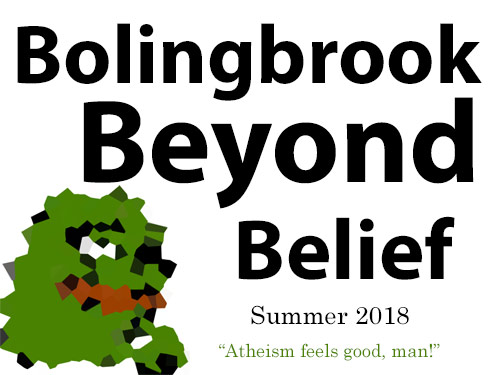 A proposed poster for the Bolingbrook Beyond Belief atheist convention.

The Bolingbrook Pepe the Frog Fan Club, a self-described “Alt-right group,” announced that they are organizing an atheist convention for the summer of 2018.

“We can’t hold rallies anymore because of the counter-protesters,” said Dennis, president of the club.  “We can, however, safely host an atheist convention.”

Alex, the group’s liaison to the Atheist Movement, says he strongly believes the “Alt-right” could be great allies:  “Look, we have much in common.  We both believe we’re smarter than average people.  We both believe that we’re being kept down by lesser people.  We both want to return to a glorious past.  We both hate feminists and Islamists.  We agree on 99 percent on the issues.  Why let a few minor issues, like the alleged humanity of non-whites, keep us apart?”

Dennis agreed:  “Love them or hate them, everyone knows that atheists are smart.  If we host an atheist convention, the public will realize that our ideas are worthy of intellectual consideration.  The atheist movement, in return, will get access to our army of trolls, funding from Mercer’s network of alt-right groups, and young men willing to march for atheism.  They’ll even leave the torches at home if asked to.   It’s a win-win for both of us!  The choice is simple.  Join us and other superior people as we try to peacefully cleanse the world, or let Skepticon define atheism.”

Alex pretended to gag when Skepticon was mentioned.

Dennis conceded that while many YouTube personalities have asked to speak at the convention, prominent atheist leaders have not agreed to speak at Bolingbrook Beyond Belief.

Alex felt that would change soon.  “We just sent an invitation to the most militant atheist in the country.  He says he represents all atheists, no matter what their other beliefs are.  So he has to come here.  When he does, other atheist thought leaders will come here.  It’s just—“

“David Silverman, the president of American Atheists, just sent me an IM.  He says we’re evil, and sent me a link to his Facebook post.”

“That’s not necessarily a bad thing.  We only promote evil ironically, so that makes it OK.  Is he going to come?”

“No.  He says he leads the marines of atheism, and marines don’t support Nazis.  He also says that he’ll personally rewrite the dictionary to exclude us from being defined as atheists.”

“Damn it!.  Well, we can invite Dave Smalley instead.”

“Yes.  Maybe he’ll be out of his denial phase by the time the convention starts.”

An e-mail from the Bolingbrook Skeptics denounced Bolingbrook Beyond Belief:  “The Alt-right is just a rebranding of fascism.  No matter what you call it, fascism is un-awesome!”