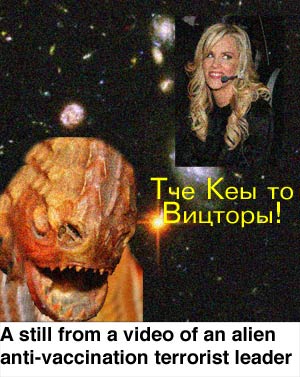 Louis X. Peterseim, spokesperson for the department said: “If you so much as hear someone use ‘Jenny McCarthy’ and ‘vaccines’ in the same sentence, let us know.  Washington State wasn’t prepared, and now they have a measles epidemic.  Bolingbrook will not make that same mistake.”

According to the department, three members of the anti-vaccination terrorist group KuKPu’K were arrested. KuKPu’K operatives infiltrate civilizations and spread anti-vaccination propaganda.  Once a civilization loses herd immunity, the operatives release once preventable diseases into the general population.  Experts from the Interstellar Commonwealth’s law enforcement branch believe that over 20 civilizations have been destroyed by KuKPu’K.

“We understand that parenting is scary,” said Peterseim.  “We know that some vaccines have risks, but the benefits of vaccinating your children far outweigh the dangers.”

Peterseim and others in the department also insisted that the claim that vaccines cause autism is fake news.

According to propaganda released by KuKPu’K, they are not opposed to vaccines, but are opposed to the spread of “gullible civilizations.”

In one holovideo, a masked leader said, “Any civilization that is willing to let fear triumph over science and reason is not a civilization worthy of reproducing.  We are not infecting innocent children.  Their parents infected them by refusing to vaccinate their children.”

The department also urges all Bolingbrook residents to stay on a vaccine schedule not only for health benefits but to send a message to KuKPu’K:

“Jenny McCarthy and Robert F. Kennedy Jr. are not typical humans.  KuKPu’K may have fooled them, but they cannot fool the average Bolingbrook resident.  The best way to fight interstellar terrorism is to vaccinate your children and yourself!”

A receptionist for Bolingbrook Mayor Roger Claar said she was busy and could not be disturbed.  She also said she believed that Claar fully supports vaccinations:

“Of course he does.  You know, he did earn his PhD., with a dissertation.”

In the background, a man who sounded like Claar said: “So, Charline, what is your plan to destroy bolingbrookpolitics.com once and for all?”

“Oh, you’re going to love this.  First, I will use my sock puppets to tell them that you were seen on the Jumbotron during a Blackhawks game with a younger woman.  (Site owner Jason Cann) will publish the story even though we know that you would never do anything like that.  When he—Why are you giving me that look?”