After 300,000 people attended the Women’s March Chicago, the Illuminati announced it was launching an investigation into security at Clow UFO Base. 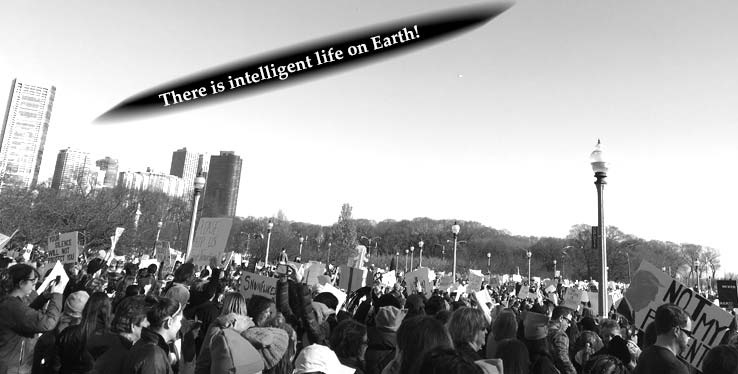 “We cannot believe that more humans attended this year’s march than last year’s march,” said Mu, an investigator aligned with the Illuminati.  “We think most of the marchers were aliens, and that means there was a serious security breach at Clow UFO Base.  We also think the New World Order bussed in aliens to Chicago from their base in Rochelle, IL.  We are going to get to the bottom of this, starting with Clow.”

Clow officials denied any security breaches at the base.

“The base is still locked down,” said an official who asked to remain anonymous.  “There are no flights to Clow, and we are keeping a close eye on flights leaving Clow.  To the best of our knowledge, none of our visitors went to the Chicago march.  Mayor Claar made it very clear that we were to do everything in our power to keep visitors away from the march.  If you ask me, I think a lot of people just hate President Trump and his administration’s treatment of women.  That’s why the marches were so popular.  But you didn’t ask me.”

Other officials said they would cooperate with the Illuminati, but did not believe any aliens from Clow attended the march.

Clow UFO Base is under the jurisdiction of the Illuminati following Mayor Roger Claar’s defection from the New World Order in 2016.

Thomas Xavier, an administrator for the New World Order, says only ten aliens were authorized from Hub 35 in Rochelle to attend the march and believes others watched from orbit.

“We did not use our visitors to inflate the numbers of marchers in Chicago.  The public is rejecting the chaos sought by the Illuminati and will turn to the order and stability we will offer them.  The tide is turning.”

A phone call to Claar was answered by a receptionist, who said he was busy and could not be disturbed.

In the background, a man who sounded like Claar said, “Charline, I just found out that my slide on the racial demographics of Bolingbrook is wrong.”

“I was sending a subliminal message to the Trump supporters in Bolingbrook that you stand by our president 110%.”

“Try to be more subtle next time.”