The Flat Out Truth Educational corporation, a company that promotes “reexamination of Flat Earth Theory,” announced that it would reapply for a charter school in the Valley View 365U School District. 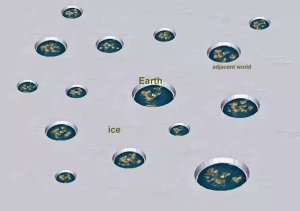 Company president Marc I. Hill stated he was very hopeful that the application would be accepted this time: “In 2014, we were ahead of our time.  Now the world has changed.  Rappers can rap about our Flat Earth and still have a career.  An NBA player can criticize globalist thinking and still have a career.  Flat Earth memes populate the Internet.  More importantly, Betsy DeVos is now the Secretary of Education.  Valley View won’t have a choice but to accept our charter school.  Just look at what she did for Detroit!”

According to Hill, the charter school will teach students from Kindergarten through Fifth Grade.  All textbooks will be published by Flat Out Truth, and all lessons will encourage “skepticism of popular globalist views.”  Science textbooks will present the “theory” of how the Earth is an infinite plain of ice.  Humans live in a “warm oasis surrounded by walls of ice.”  History textbooks will present “theories” about how globe manufacturers persuaded governments to cover up flat earth theory, and news stations prevented people from getting too close to the ice walls.

“Have you ever wondered why there’s a military base at the so-called South Pole?”

Hill says that the school will also promote the religious faith of its students:

“Revelations 7.1 says the Earth has four corners.  Qur’an 20:53 says the Earth is spread out like a carpet.  Science says otherwise.  Who should our students trust?  God or Richard Dawkins?”

No school board members would comment for this article, but president Steve Quigley did laugh before hanging up.

A science teacher, who asked not to be identified, said there was no reason to teach Flat Earth Theory in the Valley View curriculum:

Hill says he not worried about possible resistance from “globalist union teachers”:

“All I have to do is give a large donation to Bolingbrook’s Mayor Roger Claar, and we’ll be up and running in no time!”

When called for comment, a receptionist said Claar was discussing business with intern Charline Spencer, and could not be disturbed.  She added:  “Roger believes—no, knows– that the Earth is a globe.  He also doesn’t control the board of education.  End of discussion.”

In the background, a man who sounded like Claar said:  “Okay, Charline, tell me your idea for the podcast ad.”

Spencer replied:  “Come to the Taste of Bolingbrook on June 17 and 18 at the Promenade Bolingbrook.  All of the great food you expect with none of the Cook County Democrats!”

Manchester Mumbler: UK sells its UFO bases to the Virgin Group Ltd. (Fiction) » « From the Webmaster: The Problem with Trolley Car Problems