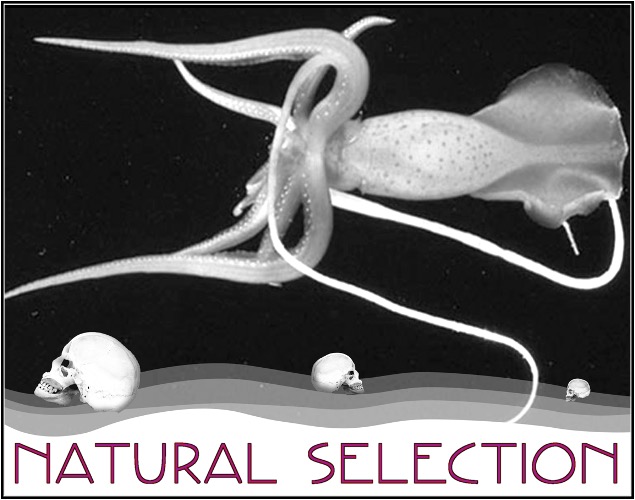 This is part 1 of “Natural Selection”, FtB’s Darwintine Festival story chain. If you enjoy being part of our community and appreciate the work we do here at FreethoughtBlogs, please consider making a donation to our legal defense fund.

Dr. Patricia Gorman shivered as she looked out of the helicopter’s window, admiring her view of the Alaskan wilderness and mountains.

“First time?” asked Paul Jenkins, a security officer for Orange Corporation, who wore a white coat and KN95 mask with the Orange logo printed on it.

She nodded and adjusted her headset.  “Much nicer than Afghanistan.”  She looked at her escort.  “Lacks I.E.Ds, right?”

Patricia added, “Though I wish Big Thinker would hire me to do fieldwork on his island.  I haven’t been snorkeling in ages.”

Paul chuckled.  “I’d take that assignment.  I hear no one bothers him, and each team member gets a private cottage.”

“Doesn’t surprise me,” Patricia replied.  She briefly scanned the sparse interior of the helicopter.  “This does.”

“This helicopter.  Brandon usually sends one of his luxury helicopters to transport contractors.”

“Rush job.  Big Thinker only had enough time to get put together a team.  No time to reposition the good copters.  It was the best we could do on short notice.”

“So who is on the team?” asked Patrica.

Paul looked up at a monitor.  The GPS maps showed they were several miles north of Eagle, Alaska.

“Do you mind if I remove my mask?” asked Paul.

“I do,” replied Patricia.

But I’ve been tested–”

“Doesn’t matter,” replied Patricia as she remembered the unorthodox tests the Orange team performed.  “You can be infected and still test negative.”

Paul gave her a critical look.

Paul shrugged.  “Fine.”  He grabbed an envelope and handed it to Patricia.  “BT said to give this to you once we got past Eagle.”

Patricia accepted the envelope and opened it.  Inside was a letter stating that she was assigned to the science team.  The envelope included a printout with names and pictures of each member.  All of the members were biologists she recognized, but two names especially stood out.  The first was Dr. Will Stokes, a cephalopod expert.  The second was the team leader, Dr. Emily Kimura.

“Is she on the University of Toronto faculty?”

The pilot’s voice chimed in over their headsets.  “Brandon just gave us permission to land.”

“Is he on-site?” asked Patricia.

“Of course not,” Paul replied.  “You know what Orange Internet’s slogan used to be?”

“Yes.  ‘The Internet can take you anywhere.’”

“That’s how he lives nowadays.”

Patricia looked out the window.  Near a forest, she could see two weathered cabins next to several automated weather stations.  Behind them, she saw dozens of armed personnel pitching camps and moving equipment around.  Before the helicopter landed, she noticed some of them building a barbed wired fence.

“Welcome to Beagle Station,” said the pilot as the copter landed.

Paul grabbed his duffle bag, and Patricia grabbed her backpack.  As they stepped out, Patricia saw other helicopters landing.  Most seemed to be carrying cargo, while others dropped off security operatives.  Paul pointed towards a woman waving at them.  Both of them walked over towards her as their helicopter lifted off.

The woman looked down at her clipboard.  “Dr. Gorman?”

She pointed at a large orange tent.  “Report to operations.”

The woman started walking, and Patricia followed.  Several minutes later, they arrived at the edge of the camp.  By the arrays of solar panels and batteries, she saw what she assumed were her team members.  Each one was sitting in a chair with a space heater in front of them.  Each chair spaced at least 10 feet apart.  In the front was a large screen that displayed the Orange Corporation logo.  Emily stood alone next to the screen.  Her mask peeked out of a coat pocket.  Patricia remembered their last meeting.

Patricia blinked then turned towards the woman.

Emily nodded in Patricia’s direction then turned away.  “Thank you for joining us, Dr. Stokes.”

Will, wearing a patched coat, dropped his suitcases near a chair.  “Sorry.  One of my flights was delayed when some woman refused to wear a mask.”

“I’m not surprised.” Emily faced the gathered scientists.  “Now that we’re all here, I want to thank everyone for coming out here on such short notice.  Brandon and I personally selected each of you for this…assignment.  Your participation will be rewarding, both financially and academically.”  She swiped and tapped her tablet.  “I will have Brandon explain why we are here.”

A few moments later, a tan man with short gray hair appeared on the screen.  He was sitting next to an empty outdoor swimming pool.  His mouth moved, but no sound came from the screen.  Emily tapped her tablet a few more times.”

The scientists replied that they could.

“Ah.  Well good day.  I trust that Dr. Kimura has performed all the pleasantries, so I will get to the point.  As most of you know, as part of my commitment to controlling climate change, I have personally funded several climate monitoring stations around the world.  The information from these stations is allowing climatologists to improve their models.  Beagle Station is one of these stations.  I wish to apologize for the lack of proper facilities.  These stations are normally unmanned most of the year.

“The reason why all of you are here is due to an incident that happened recently.  Dawson Station in Canada went offline.  A repair crew was sent out to investigate.  This is the last radio message we received.”

Brandon opened a window and double-clicked on the audio file:

“Help!  Help us!  We need a tactical team and medevac!  Change that.  Send the military.  Bomb everything! Now!”

In the background, a faint voice spoke something in French.

A woman replied over the radio:  “Maple Team, please clarify. I can’t send a request –”

The voice that earlier spoke in French spoke in English. “I’m so sorry–”

The screen switched back to Brandon.

“Naturally, we sent a tactical team to investigate.  There was no sign of the repair crew, and the station was destroyed.  However, we were able to detect a signal from one of our GPS devices moving away from the station.  I ordered the team to track the signal.”  Brandon seemed to ponder his words for a few moments.  “It will be easier to show the bodycam video.”

Brandon started the video.  It started with a man tumbling down a wooded hill.  When he stopped tumbling, he shouted obscenities.

A woman’s voice over the radio said: “It’s heading your way.  You should see it soon.  Confirm.”

The camera moved to the side, then stopped on a white blob with a rubbery surface.

The man pulled out a pistol and said “Shit” before firing at it several times.  When he stopped firing, the mound rose revealing its squid-like arms and tentacles.  It moved towards the man.

The creature opened its two eyes and rushed at the man.  It stopped inches from his feet.  It spoke something in French with a distinctly French-Canadian accent.  Then calmly said in English: “Please excuse me, but you are obviously not fit for snow season.  I cannot select you.”

It thrust a tentacle at the camera and the video ended.

The scientists sat in silence as the screen switched back to Brandon’s video stream.

“Yes,” said Brandon.  “And at least one of them is heading towards you.”