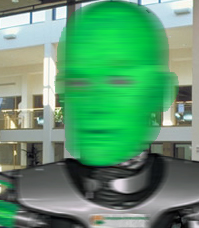 A demonstration of a Bolingbrook Park District’s robot prototype ended in disaster after it sprayed Mayor Roger Claar with a CO2 fire extinguisher.

Eyewitness say Claar was unharmed, but “very upset,” after the attack.  The robot has since been shut down, pending reprogramming.

The eyewitnesses say the incident occurred during a secret demonstration of the prototype robot.  The eyewitnesses said the commissioners claimed the robot would save thousands of dollars in labor costs alone.

“They can work 24 hours without being paid overtime,” said Park District president Jerry Hix.  “They won’t join unions, and they won’t waste our time with contract negotiations. Our human employees still won’t take no for an answer.  Anyway, thanks to advances in artificial intelligence, we can now say the future of our park district is automated.”

The robot first demonstrated simple cleaning tasks.  Hix then turned on the “rules enforcement mode.”  An employee pretended to fish at Hidden Lakes Trout Farm.  The robot walked up to the employee.  “You are fishing outside of the legal period.  Return the captured fish now.  I am authorized to use all means necessary to make you comply.”  The employee returned the fish.  “Thank you for following the rules of the Bolingbrook Park District.  Did you know that Bolingbrook was named one of the best places to live in America in 2014?”

After the demonstration, eyewitnesses say Claar walked up to the robot, holding a glass of cola.

“Alcohol detected in your glass,” the robot replied.  “Alcohol is not permitted in this Park District facility.”

“Cola and alcohol detected in your glass,” replied the robot.  “Alcohol is not permitted in this Park District facility.  Did you know that the Bolingbrook Park District was founded in 1970?”

“Yes,” snapped Claar.  “Because I am the mayor of Bolingbrook.”

“Did you know that Mayor Claar has held the office since 1986?”

“Then you know that Mayor Claar is the source of all rules in Bolingbrook.  Alcohol is prohibited in this building.  To defy this rule is to defy the mayor.”

Claar laughed.  “You’ll only get this drink off me when you remove it from my cold hand.”

“Chilling your hand is easy to achieve.”

The robot then sprayed Claar’s hand with a fire extinguisher.  Claar dropped the glass and stepped away.  Eyewitnesses say Claar cursed for several seconds and then ordered the robot shut down.

Anonymous sources within the Park District confirmed the incident. They said the robot would remain shut down until it is programmed to recognize Mayor Claar and to grant him a “mayoral exception” to the rules.

The same sources say they hope to deploy the first robots in 2019.

Claar and the Park District representatives refused to comment for this article.

Chicagoland ghosts plan mass haunting to protest gun violence
Werecoyote moves to Bolingbrook
Naperville: You cannot pour beer directly from the tap to your mouth!
God to smite Bolingbrook on 2/22/18

From the Webmaster: Do psychology and evolution mix? » « Web exclusive: Producer vows to bring ‘The Bob Jaskiewicz Show’ to BCTV (Fiction)