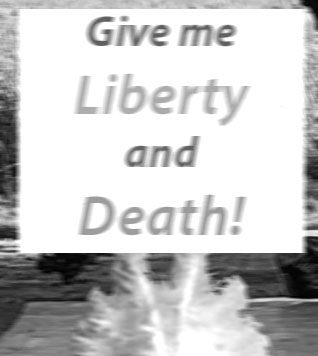 An alien poses with a sign that reads, “Give me liberty and death.” The alien was on the way to a protest in Palatine.

The aliens, wearing human suits, started marching down Rand Rd, holding signs and chanting: “Give us Liberty!  Give us death!”  Minutes later, all the aliens started gasping for air and collapsed to the ground.

Patricia Z. Numan, a Palatine resident, witnessed part of the protest:  “I thought their signs were great, so I slowed down and honked my horn.  One of the marchers staggered off the sidewalk towards me.  I was about to roll down my window when it sprayed this green liquid on my window.  Then it fell over.  The others started coughing too.  That’s when I sped off and called 911.”

According to Numan, she was detained for two hours while a hazmat team cleaned her car.

“I used to trust Fox News and distrust the government,” said Numan.  “After what I saw, I realized I was wrong.  Fox News works for the part of the Government that values businesses more than people. Governor Pritzker values me, even if I’m just a taxpayer to him.  I hate to say it, but I have to trust Pritzker over Fox News if I want to survive.  I’m all in for Illinois!”

When police officers from Palatine’s Special Affairs Division arrived, all the aliens were incapacitated.  Under orders from Village Manager Reid Ottesen, the officers burned the bodies before collecting them.

“We weren’t sure they were all dead,” said an officer, who asked to remain anonymous.  “But the Interstellar Commonwealth imposes fines if you’re responsible for letting an infection leave your planet.  So we couldn’t take any chances.”  The officer added:  “I might have heard one of them say, ‘Freedom.  We don’t want it.  We don’t need it.  Not!’  But that just could have been a death twitch.  I was just glad to finally be able to use our flamethrowers!”

Special Affairs and officials at Rob Sherman UFO Base are investigating the deaths.  While they have few leads, investigators doubt the protest was spontaneous.

“It’s odd that all the signs had the same two fonts,” said a Sherman official who wished to remain anonymous.  “It’s also odd that the same organizing message appeared on 12 different worlds at the same time.  We’re treating this as a case of Astroturf Manslaughter.”

A receptionist for Mayor Jim Schwantz said he wasn’t in Village Hall:

“He’s a part-time mayor, and he knows better than to risk infecting essential village staff.  Thank you for calling the Village of Palatine.  Yes, your request requires a permit.  Yes, you will have to pay a fee.”

In the background, a man who sounded like Schwantz said, “This message is for Mr. Hotel.  We got the Pez Dispensers!  Our blue men and red men love them.  Thank you for saving me from kissing an orange!”