Bolingbrook Mayor Roger Claar admitted before the House Appropriations Sub-subcommittee on Nail and Thumbtack Spending that President Trump asked him to investigate the Biden family.

“He said he was willing to spare Clow UFO Base,” Claar reluctantly said, “in exchange for dirt on Joe Biden.”  Claar quickly added: “I never told the President that I would tell a big lie for him.”

“Did you mention the possibility of small lies?” – asked Representative Brad Schneider.

“I’ll take the fifth with some Jack with a coke,” replied Claar.

The sub-subcommittee, which oversees all US Government UFO spending and Interstellar policy, subpoenaed Claar as part of its impeachment investigation into Donald Trump.  Claar replied that the President told him not to honor the subpoena because “his Supreme Court was going to declare Congress unconstitutional”. Claar then added that because he had a book deal with an interstellar publisher, he also had “Book Deal Immunity.”

“Book Deal immunity applies to self-published books as well as traditionally published books.  Testifying before the committee will deny me the opportunity to pursue happiness, which is unconstitutional.  The government does not have the right to compel spoilers!”

The members of the Sub-subcommittee flew to Clow UFO Base and booked a meeting room.  A Martian Colonial battleship then beamed Claar from his office at Village Hall.

Beth, who asked that we not use her last name, saw Claar as he was being abducted:

“He flipped off the space craft and said: ‘I’ll talk, but you won’t like what I have to say.’  He was not in a good mood.”

Once in the meeting room, Claar refused to be sworn in, and made several unprintable comments about the “Democrat Party Impeachment Witch Hunt.” When threatened with imprisonment by one Phobos, Claar laughed.  After the Martian Colonial Ambassador walked into the room, Claar stopped laughing and agreed to be sworn in.

During the two hour hearing, Claar testified that Trump asked him 10 times for information on the Bidens.  Trump, according to Claar, explicitly threatened to cut off Clow funding if he did not conduct a favorable investigation.  Claar went on to say that Trump dropped his demands once the impeachment investigation started:

“He failed to commit a crime, therefore it’s not a crime, and this hearing is illegitimate.  Can I go back to work?”

Rep. Sean Casten asked Claar what his investigation found.  Claar replied that the former Vice-president only visited Clow UFO Base once, and accidentally called it “Cow UFO Base.”

“He corrected himself, and it was kind of funny.  Other than that, we’re unfortunately not aware of him doing anything illegal.”

“Did you hear Trump say he was going to take away your funding?” asked Rep. Mike Simpson.

“So we can call your evidence ‘hearsay,’ don’t you agree?”

“So what are you doing providing hearsay evidence to this committee?”

“You’re behind the curve, Congressman.  Our current talking point is that Trump did nothing wrong.”

Congresswoman Martha Roby accused Claar of being a “Never-Trump Republican” and pretending to be a Trump supporter for political gain.

“Don’t you think a real Trump supporter would be consulting Stephen Miller about their community’s demographic problem?” 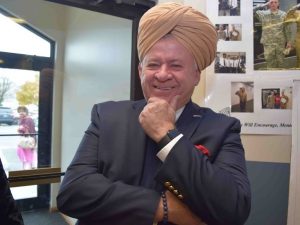 File photo of Mayor Claar at a Prakash Utsav celebration in Bolingbrook.

Claar denounced Roby: “I was a Republican before you were even born, and I will be a Republican when I die.  The only thing I gained from Trump was a close election.  Look, every real Bolingbrook resident loves me and I use that love to promote the Republican party.  In fact, I’m so loved that our local Sikh community made me a Turban, and I’m honored to have that title!  I think I’m the first Republican Turban in Bolingbrook’s history!”

“Right now, the only thing I really care about is Trump staging a coup so we can get past this impeachment nonsense.”

After the hearing, Claar refused to comment to the press.

Schneider said Claar was helpful: “We suspected that Trump’s corruption extended to the stars, and Roger proved it.”

The first Thanksgiving: Was it aliens? (Fiction) » « Another year older (Non-fiction)