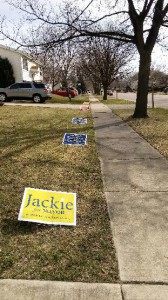 Did weredeer attack these signs? (Photo from Vote Roger Claar Out in 2017.)

The Department of Paranormal Affairs warned that Weredeer and wondering Minnesota Talking Land Squids are currently fighting over yard signs for the Bolingbrook United party.

“All residents should use caution before putting up any political yard signs, especially signs from the Bolingbrook United party,” read the department’s press release.

According to eyewitnesses, feral weredeer are venturing into Bolingbrook and are tearing down yard signs or removing them completely.  Some folks have witnessed Minnesota Talking Land Squids defending the signs.

Paige, who asked that we not use her last name, claimed that she saw a brawl between the two:

“It was terrible!  There are weredeer being suffocated by the squids and weredeer using their claws to slice up the squids.  It all started when one weredeer pulled up a sign.  I’ve never seen such violence before!  Let me tell you, I’m never eating sushi or venison again!”

Doug, who asked that we not use his last name, claimed to have been accosted by a land squid:

“Honestly, I just wanted a closer look at the Bolingbrook United sign.  Because— Anyway, this squid walked up to me.  I was shocked, but maybe I shouldn’t have been because I read the Babbler.  Anyway, it said, ‘Hello sir.  I see we share the same interest in this party of social justice.  I sincerely hope you weren’t planning on touching this wonderful sign. I would feel really bad if every bone in your body was crushed and your eyes ended up on my suckers.  You know what I mean?’  I ran away and called the cops.  They didn’t do anything except tell me not to put up ‘Bolingbrook United’ signs in my yard.”

Stacy claims to have met a weredeer while putting up her signs:

“There was this guy who was wearing shorts, and had his shirt on backwards.  He walked up to me as I finished putting up my sign.  He then started insulting my looks and said I knew I was ugly because I was voting for Bolingbrook United.  You won’t believe how he followed up.  ‘If (Mayor Roger Claar) is re-elected, my fellow weredeer will be allowed back into Bolingbrook.  We’ll even be allowed to use our new PUA techniques on human women.  We can only mate with humans and deer, and we’ve been forbidden form mating with humans for so long.  We can’t wait to replenish our human bloodlines!  If you take down those signs, I will consider mating with you in my warder form, even if I find you ugly!  You do know that I am a nice weredeer, right?’  I just sprayed him with pepper spray and ran back into the house.”

Stacy says the police couldn’t find the alleged weredeer, but did ask her to take her signs “for her protection.”

“I said no!  Take away the weredeer who are harassing the opposition instead!  Don’t take away my freedom to tell the world that Roger needs to be fired!  He’s had decades to get rid of the weredeer, and instead he’s enlisting them to do his dirty work!”

The Weredeer Union of Bolingbrook released the following statement: “Not all weredeer are misogynists who vandalize campaign signs.  A few of us support Bolingbrook United and hope they will represent all residents, and not just campaign donors.”

Bolingbrook United and Bolingbrook First could not be reached for comment.

In the background, a man who sounded like Claar said, “So Mr. Harris, if I let you endorse me, what will you say?”

Mr. Harris: “Roger is a strong but compassionate man who has to deal with a growing Muslim population in his village.  In Israel, the security forces have bulldozed some Muslims’ homes.  It could be that Israel is mean.  It could also be that their homes are too dangerous to keep standing.  If we want to keep Bolingbrook safe, we have to consider destroying all Muslim homes and their mosque in Bolingbrook.  It’s horrific for Westerners to think about, but we have to think about it, but not necessarily do it.  Instead it may be more appropriate to conduct random enhanced interrogations of all Bolingbrook Muslim residents.  Maybe not?  All we can say for sure is that these questions will challenge any thought leader.  The Regressive Left has no leaders or thinkers. Roger is a leader and a thinker.  So I am proud to endorse him for mayor,  If I am correct about him.”

Roger: “Impressive.  Have you ever considered running for office?”