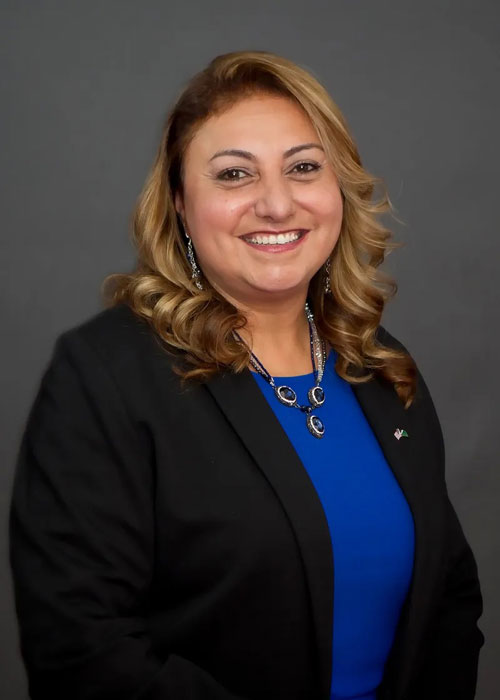 Will Mayor Mary Alexander-Basta make history in 2022? (Image from the First Party for Bolingbrook site.)

After failing to predict the 2020 COVID-19 pandemic, our psychics made a strong comeback with their 2021 predictions. The psychics correctly predicted the insurrection and that people would escape through tunnels. They also predicted that President Biden would still be in office at the end of the year, and that he would face many challenges.

We believe our psychics are back on track, and we have the utmost confidence in their predictions for 2022. However, please keep in mind that the future is not set, and posting these predictions could alter the future. Just like we believe that there were no petition challenges for the 2021 election because we predicted the election board would throw all the candidates off the ballot.

So here is what you can expect in the new year:

The largest Greenland ice sheet collapse in history will cause the largest tsunami ever, devastating the East Coast. Despite the wave reaching portions of West Virginia, Sen. Joe Manchin will refuse to approve disaster relief or support the Build Back Better plan. He will deny that he really wants a massive bailout for the coal industry.

“We have too much debt, and rebuilding the eastern half of our country costs too much. It’s far cheaper for the affected states to be just like West Virginia. Now if you’ll excuse me, I have to go to Kentucky to recover my yacht.”

Sen. Kyrsten Sinema will say she supports rebuilding Washington DC,  but will be blunt in her opposition to expanded disaster relief:

Bolingbrook Mary Alexander-Basta will raise eyebrows around Chicagoland when she flies the Thin Bread Crust flag over village hall. She will defend her decision like this:

“Delivery Drivers have one of the most dangerous occupations, yet their work is vital to keeping Bolingbrook’s restaurants open. We honor police officers for their bravery, but have yet to honor members of an occupation with a higher fatality rate. This week, I’m correcting that.”

Bolingbrook’s police unions will not comment about her decision until much later.

Elon Musk’s love for the Skeptics’ Guide to the Universe hosts will grow. Tesla and Space X will spend millions of dollars advertising on the podcast. Musk will also become a regular guest, and his arguments with Dr. Steven Novella over COVID-19 will be legendary. Jay Novella will say, “Man, Elon, just sitting next to you gets me high.”

Musk will arrange for the rogues to ride on the second Starship orbital test flight. The flight will end in disaster when the Super Heavy Booster explodes during takeoff, and Starship crashes into the ocean. The hosts will survive with injuries.

“You know,” Cara Santa Maria will say, “You really should install an escape system on Starship. Even airliners have inflatable slides.”

Despite the initial hard feelings, things will improve when Elon buys the rights to be called the founder of the SGU.

In what will be known as the “Cop Coup,” Bolingbrook police officers will arrest the village board before they can vote to legalize all garbage toters. The officers will accuse the board of “conspiring to distribute a federally illegal substance,” because the board were also debating the merits of allowing a cannabis dispensary in Bolingbrook.

As a result, Trustee Michael Carpanzano will be installed as the new mayor of Bolingbrook:

“Gee, I’m getting messages from residents who feel strongly about this sudden police action. Regardless of how you feel, I think we can all agree that the police have a demanding job. So I urge all residents to come together and support our officers. Without them, we would descend into anomie.”

Village Co-Administrators Ken Teppel and Lucas Rickelman will rush into the boardroom and demand the immediate release of the board because the police budget doesn’t have an insurrection line item. When asked how they intended to enforce their order without the police, the Co-Administrators will reply that they contacted Bolingbrook ANTIFA, and if the police do not stand down, they will post screenshots of every officer’s embarrassing social media posts online.

“All of you will suffer a fate worse than death. You will be canceled!”

The officers will surrender and resign. Carpanzano will step down as mayor. Alexander-Basta will be reinstalled as mayor. She will sentence  Carpanzano to one year of house arrest, so he cannot leave his home.

“As of today, you are grounded!”

Historians will then spend years debating whether Alexander-Basta is the second mayor in Bolingbrook’s history to serve non-consecutive terms.

The Rift: A Bolingbrook Babbler Story will become an Amazon best seller in the category of “Books set in Bolingbrook that Don’t Mention Drew Peterson”.

When polls suggest the Democrats might keep control of the House of Representatives, Florida’s governor Ron DeSantis will send his Florida State Guard to the temporary national capitol in Chicago to arrest President Joe Biden and all Democratic members of Congress.

“I must do what President Trump failed to do,” DeSantis will say. “I will stop the steal, and I urge all patriotic law enforcement officials to join me. It will work this time because Steve Bannon isn’t involved!”

Biden will respond by mobilizing all military branches to defend Chicago.

“Here’s the deal,” Biden will say. “We have elections. Fair elections. If you want me out of office, vote me out. Don’t send an army. That’s not how we do things.”

As the Florida State Guard and their Russian military “advisors” approach Chicago, Speaker Nancy Pelosi will send out an urgent text message.

“Our Democratic majority is in danger. DeSantis and his Republican army are marching towards us as I’m typing. Democracy is in danger and we might lose the opportunity to talk about passing the John Lewis Voting Rights Act.

“We’re also in danger of missing our FEC monthly fundraising deadline.  If every Democrat like you donates…”

Note: This is a work of fiction. All opinions expressed are my own. They do not reflect the views of any organization I work for or of my employer. Feel free to leave a comment here or in the Bolingbrook Babbler Readers Group.