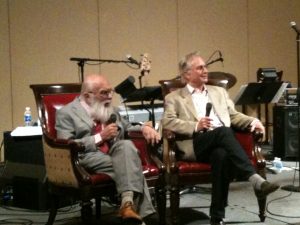 Professor Richard Dawkins announced his defection from the New World Order to the Illuminati at the Bolingbrook Golf Club.

Dawkins, who secretly traveled to Bolingbrook for his Illuminati initiation ceremony, explained his decision to the gathered dignitaries:

“The board of the NWO gave me an ultimatum: Stop attacking marginalized people or else.  Can you believe that anyone would give me, Professor Richard Dawkins, an order?  So I made a bad faith tweet about trans people, and the NWO revoked my Humanist of the Year award from 1996.  I told them they had one day to apologize.  They ignored me!  Don’t they know that nobody can ignore me, Professor Richard Dawkins?”

Dawkins also confirmed that his organization, the Center for Inquiry, is now under Illuminati control and purged of all NWO members. New CFI embassies will open at the Illuminati’s UFO bases over the next two years, while CFI will close its embassies at the NWO’s bases.

Ophelia Benson, a feminist blogger known for her transgender exclusionary views, welcomed Dawkins to the Illuminati:  “Nine years ago, the Illuminati forced me to participate in a trivia contest with the fate of Seattle at stake.  At the time, I wasn’t too happy about that.  Boy, have times changed!  Now I’m the 5th Preceptor for the State of Washington—  Which just goes to show that if you hate trans people like I do, I can forgive almost anything you do.  Welcome aboard Richard.”

“Thank you.  I am happy to be a member of a society that values me as much as I value my honey.”

“I wonder if Richard ever offered his honey to J. K. Rowling.”

“Excuse me,” snapped Dawkins.  “Are you making comments during my speech?”

“Sorry.  Old habit.  On my blog, I like to post other people’s works and add my comments.”

Deputy Mayor Michael Lawler and Trustee-elect Troy Doris performed the Illuminati’s Rite of Acceptance for Dawkins.  After the ritual, Lawler and Doris addressed the audience.

Lawler then delivered his remarks:  “I would be remiss if I didn’t mention all the fine trans individuals who work for the Illuminati.  Some of them live in Bolingbrook and are involved with Bolingbrook Pride.  Professor, please understand that you were not brought into the Illuminati to spread transphobia.  You were accepted for your ability to spread anger and chaos around the world.  Please remember that.”

“If I didn’t just ask questions to so-called trans people, would I still be a popular British personality?”

When reached for comment, Mayor Mary Alexander-Basta denied being a member of the Illuminati, or that Dawkins was recently in Bolingbrook. She then said:

“Before you log off, I’d like to run something by you before I present it to (Trustee Michael Carpanzano.)  As you know, Bolingbrook is a diverse community, and corporations now support diversity. So what do you think of this tagline? ‘Bolingbrook: Where your business can stay woke without going broke.’”