Every year, Bolingbrook Mayor Roger Claar delivers a State of the Village address, and the Babbler prints the responses from Bolingbrook’s unofficial opposition parties.  This year, The Roger Claar Party, Our Revolution Party, Bolingbrook First, The Positive Party, The Art Bell Party, and The Al Gore Party accepted our invitation. Bolingbrook United’s response will be posted on our web site later today.

The Roger Claar
“A great mayor deserves a great party.”

The end is near!  The end of Roger’s service as the Mayor of Bolingbrook is approaching. Roger has done so much for our community.  Instead of farms, we have shopping malls and factories.  We have the right balance of bars and churches.  Under Roger’s leadership, we’ve grown into the second largest village in Illinois.  Roger, you have built a legacy.  A legacy that is worthy of protection. 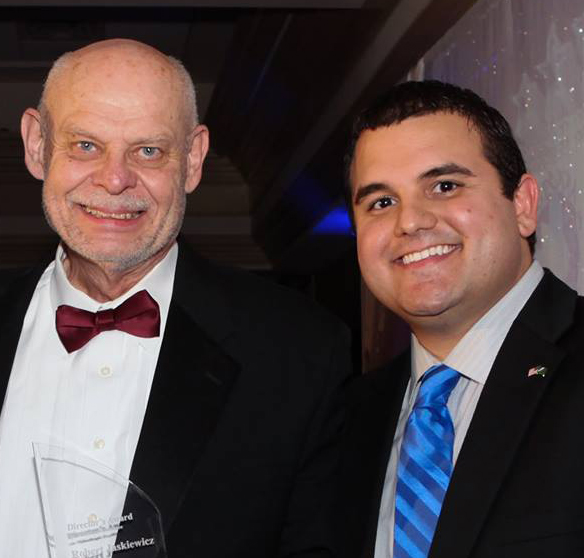 Robert Jaskiewicz (Left) and Michael Carpanzano at a 2014 Bolingbrook Chamber of Commerce event.

The worst of them, however, is Trustee Michael Carpanzano.  As the Executive Director of the Bolingbrook Area Chamber of Commerce, he gave the “Anti-Roger” —Trustee Robert Jaskiewicz,— the 2014 “Director’s Award of Philanthropic Excellence.”  Are we supposed to believe he now recognizes the great evil that is the “Anti-Roger?”

We don’t think so.  We fear that Carpanzano will charm Roger into endorsing him to be the next mayor.  Once he’s elected, he’ll “carp” Roger, and take direction from the “Anti-Roger.”

This year, we’ll be celebrating the great things that Roger has done for us.  Next year, we hope that residents will vote to preserve Roger’s legacy by electing the only party that fully supports Roger!

Our Revolution Party
“Bernie or Burn!”

This year’s State of the Village address perfectly encapsulated Bolingbrook.  Roger held a decadent event at a tax-payer funded palace, while the rest of us toil at Amazon warehouses or make over-priced plastic products.  Roger’s cronies eat fine meals while the residents of Bolingbrook eat (expletive deleted) soup and Roger is the one supplying the (expletive deleted)!

Sen. Bernie Sanders has shown us the way.  Compromises will compromise us.  Tactical surrenders to the one percent will become total surrenders.  Business as usual won’t work.  It’s time for a revolution in Bolingbrook!

We have a simple plan to save the residents of Bolingbrook:

If you have to ask how we can afford these programs, we ask: How can Bolingbrook afford to give tax credits to businesses, and to build a luxury golf club?

The world is burning.  You can either join us in supporting Bernie, or you can burn!

We loved listening to Roger tell the truth about the great state of our village.  We just have one thing to add:  You’re welcome.

For decades, Roger worked with us to turn Bolingbrook from a sleepy suburb to an international business hub.  We’re the party of Clerk Carol Penning, Deputy Mayor Michael Lawler, and Trustee Maria Zarate.  We’re the public officials that passed the laws that made Bolingbrook great!

The so-called First Party for Bolingbrook is like a cover band.  The tunes sound familiar, but the performers are just copycats.  Their name is also an insult.  We predate FPB, but they want residents to think they’re the first party that cared about Bolingbrook.  What have Trustee Michael Carpanzano and Trustee Mary Basta done besides follow our plan for Bolingbrook?

Roger and Trustee Sheldon Watts may have left our party, but we haven’t left Bolingbrook.

The Positive Party
“Everything is great!”

At the State of the Village address, Roger showed us that the real residents of Bolingbrook have every reason to be positive.  Roger is a positive person, and his positive energy powers Bolingbrook.

Our foes are negative, and they thrive on negative energy from Springfield.  They want to feast on the positive energy of Bolingbrook and turn every resident into an energy vampire.

The Art Bell Party
“Keeping an eye on Bolingbrook’s Skies.”

Roger has done a lot of great things for Bolingbrook, and The State of the Village address showed that.  But he didn’t show everything.

Once again, Roger didn’t talk about Clow UFO Base, the largest employer in Bolingbrook.  He didn’t talk about our relationship with the Interstellar Commonwealth, or why he still allows alien abductions to occur in our village.  It’s 2020, don’t you think the aliens have learned everything they’re going to learn by probing us?  I don’t know about you, but I want to get a good nights sleep without worrying about ending up on a space ship with a probe in an unmentionable part of my body!

Roger also didn’t address his alliance with the local wereskunk population.  Their cousins spread trash everywhere, while the wereskunks act like they own Bolingbrook.  It’s so bad that if a wereskunk sprays you, the police won’t bother to chase them.

We feel it is time for residents to stand up to the wereskunks, end alien abductions, and tell secret societies that we are not pawns in their game of world domination.  We are Bolingbrook, and we must control our own fate!

The Al Gore Party
“We can build a greener, better Bolingbrook”

Roger talked about Bolingbrook’s great history, but we were disappointed that his plans for the future didn’t go beyond maintaining his political machine.

The fact is the climate that allowed Bolingbrook to grow is going away.  Some of that change is irreversible.  Some of the worst effects can be prevented if we start reducing our carbon emissions.

Roger made bold moves in order to grow Bolingbrook.  We now need to make bold changes to ensure its survival in the new world.  The residents have done it before, and we can do it again! Let’s work together so there will be Bolingbrook residents in the 22nd Century.  Those future residents, we believe, will teach their children about Roger, and preserve his legacy of a village that you can grow with.