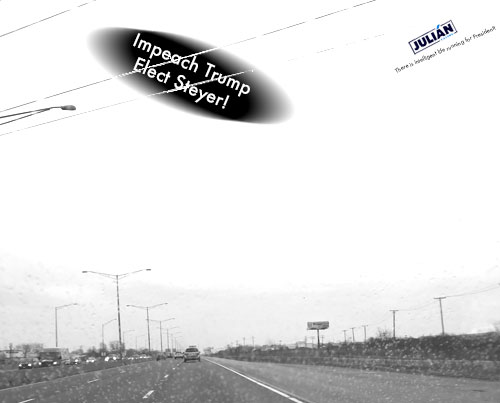 Bolingbrook Mayor Roger Claar announced that Clow UFO Base sold the most political UFO display ads in its history.

“Twitter is banning political ads,” said Claar, during a press conference with members of the interstellar media.  “We’re selling more political ads than ever.  So if you want to win your next election, don’t look to social media.  Look to the stars!”

According to Claar, most of this year’s spending came from liberal-leaning billionaires and “well-connected” Democratic campaigns.  Most of the advertising spending is aimed at influencing the Democratic Caucuses.

“Just ask (Pete Buttigieg) and Tom Steyer.  Their covert committees liked the results of our ad buys, and love our reasonable prices!  You know, Michael Bloomberg just bought several ad slots.  Now I’m not a psychic, but I wouldn’t be surprised if he won Iowa because that’s how effective our ads are.”

Claar said a display ad on a UFO is very influential among rural voters.

“If an Iowa farmer sees your ad on a UFO, they’re going to assume that an advanced civilization supports your polices.  Once an Iowa farmer thinks that, no TV ad will persuade him that your candidate is inferior.  Aliens are the key to victory.”

Ads, however, do not mean that a UFO crew endorses a candidate.  Lodix, a botanist from Shedo Collective, says she puts ads on her UFO for the money:

“I can’t tell the difference between Sen. Elizabeth Warren and Representative Steve King.  But I do love the Interstellar Credits I get from running their ads.  Let’s face it, my job sampling Earth plants isn’t the most profitable career.  So I can use the extra credits.”

Lodix, however, does have some concerns about the ads:

“You shouldn’t decide your leaders based on an ad or meme.  You really should look at all of their positions.  Still, ads and memes can be infectious.  Look at the humans who think Hillary Clinton would have been just as corrupt at President Trump.  Trump is a universal example of corrupt leadership.  There’s no way Hillary could ever have lived up to his example, and more importantly, she didn’t want to.  That shows me the power of advertising and memes to influence humans.  Honestly, your species really (expletive deleted) up by selecting Trump.”

While most UFO Bases around the world ban political ads, Claar said he was proud that Clow allows them:  “We like to do things differently in Bolingbrook.”

Claar also defended allowing ads for candidates affiliated the New World Order, despite being a leader of the Illuminati himself:

“The Illuminati is dedicated to spreading chaos.  Nothing spreads chaos quite like attack political ads.  Just look at my community.  The local Democratic party is in chaos because Rachel Ventura is challenging (Representative Bill Foster).  Their infighting helps me as both a member of the Republican Party and as a member of the Illuminati.  Let them fight, and let me collect the money!  I mean let Clow collect the money.”

He did say that he expected the Trump campaign to devote “significant resources” to UFO advertising starting in the summer of 2020.

When reached for comment, a member of Foster’s staff denied that Foster buys UFO display ads:

“UFOs are not alien spacecraft.  Now if you’ll excuse me, I have to find the Congressman because we just found out that he’s canvassing in the same subdivision as Rachel is and— Oh no!  We’re too late!”

In the background, a man who sounded like Foster said:  “There are other ways to stop manmade climate change.”

A woman who sounded like Ventura replied:  “Only the Green New Deal can save us.”

“I’ll bet you don’t even know what the Green New Deal is.”