Sources inside Representative Peter Roskam’s campaign say the campaign will run a haunted attraction based around his Democratic opponent, Sean Casten.  Based on “Hellhouses” run by Christian ministries, the attraction will be called “Casten you to Hell.”  It will open October 1st and run through Halloween. 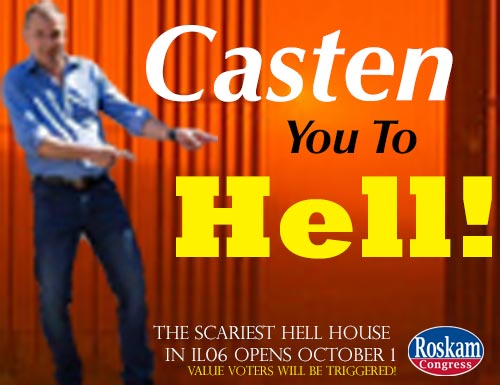 “Sean Casten is a liberal devil,” said Blake, who claims to be a paid member of Roskam’s staff.  “We want to show the voters of the Sixth Congressional District the kind of Hell on Earth Casten would inflict on them.”

According to the sources, horrors planned for the house include:

When asked if the “Entitled” activists were supposed to represent Social Security and Medicare recipients, Blake shushed this reporter.  “We’re not allowed to talk about S and M in Wheaton.”

Jack, a volunteer for Roskam, said part of the house will portray “a Casten owned business.”  It will depict Casten burning money, while employees are taxed to death, and “Christian Freedom Fighters” are crushed by a giant “carbon foot.”

“We tried to get Sean’s former employees to speak out against him,” said Jack.  “None of them wanted to.  He must have cast a spell on them because they all said they liked him.”

Blake says the “Hell House” will play a key role in securing victory for Roskam.  “Most constituents hate Peter.  If we can make them fear Sean, we’ll win.  Fear is stronger than hate.  So spread the fear!  Oh, did you know that Sean’s Barrington office is also a gay bar?  That’s scary!”

A receptionist for the Casten campaign said the campaign didn’t believe Roskam would host such an event.  “These attack ads just cover up the fact that Peter is afraid of his constituents.  Seriously.  When’s the last time you saw Peter in our district?”

In the background, a woman said, “Sean!  (Illinois Speaker of the House Mike Madigan) just sent a truckload of flyers.”

“Wow.  That’s nice.  Considering I’ve never spoken or donated any money to him.  Let me take a look.  Wait a minute.  These are Kelly Mazeski flyers.”

“Mike included this card with the flyers.”

“Let me see.  ‘Roses are red/Violets are blue/Kelly was my candidate/Drop out of the race or I’ll—’ Woah!”

A receptionist for Roskam neither confirmed nor denied the story.  “I love the Bolingbrook Babbler.  I’ve been reading your stories since I was a kid.  Every week I recite the prayer that will save Bolingbrook.  I’ll tell Peter that you’re on Skype with me!”

The receptionist walked into a meeting room.  Roskam and eight other men were sitting around a table.

“I had a weird dream,” said one of the men.  “I dreamt that Sean Casten told me he was moving to Michigan but he would keep a house in our district so he could still be eligible to represent our district.”

Roskam slapped the table.  “That’s our next web ad.”

“But it was just a dream, congressman.”

“Was it a dream?  God can speak to us in our dreams, right? Maybe he decided to make you a prophet that will lead me to victory.”

“I wonder if anyone else on my staff has been blessed by our Lord and Savior.  You know you can’t be on my staff unless He’s touched you.”

The rest of the staff started speaking in tongues.

“I love having Wheaton in my district.”