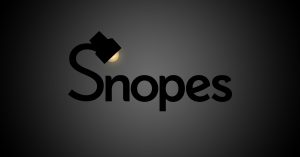 Is this the end of Snopes?

Now they’re facing financial problems and a legal dispute which may force them to shut down.

Since our inception, we have always been a self-sustaining site that provides a free service to the online world: we’ve had no sponsors, no outside investors or funding, and no source of revenue other than that provided by online advertising. Unfortunately, we have been cut off from our historic source of advertising income.

We had previously contracted with an outside vendor to provide certain services for Snopes.com. That contractual relationship ended earlier this year, but the vendor will not acknowledge the change in contractual status and continues to essentially hold the Snopes.com web site hostage. Although we maintain editorial control (for now), the vendor will not relinquish the site’s hosting to our control, so we cannot modify the site, develop it, or — most crucially — place advertising on it. The vendor continues to insert their own ads and has been withholding the advertising revenue from us.

Snopes has setup a fundraising page in response.  As of this writing, it’s still short of its $500,000 goal.  Most of the staff of the Babbler, including myself, have donated.

For over twenty years, Snopes has practiced skepticism in its purest form.  If we’re willing to support it, then maybe all of the skeptical readers who frequent Freethought Blogs should too.

From the Webmaster: Maybe Milo and skepticism shouldn’t mix? » « Mayor Claar tries to replace Trustee Jaskiewicz with an android (Fiction)