December 17th is International Day to End Violence Against Sex Workers. From a feminist and a trade unionist perspective, I know supporting Sex Workers’ Rights is the logical thing to do.

As I wrote in my blog post ‘Organising Sex Workers Within Mainstream Labour Movement’,  the stigmatization and consequent exploitation of sex workers would be minimized if sex work is accorded its recognition as a bonafide job; a real job which has its challenges, rights and protections under the law like every other job. Criminalization of sex-work in many countries and jurisdictions makes it difficult to create a safe, enabling environment and workplace for sex workers.

The continued criminalization of sex-work, rather than serves as a deterrent has only succeeded in exposing sex workers to violence, intimidation, harassment and exploitation.

All workers, whether they are bankers, micro-biologists, interns, salespersons, street hawkers, housewives, surrogates or 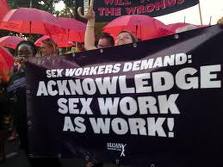 sex workers should be protected from forced labour. Yes, everyone’s body, in one way or the other, is being purchased for labour and sometimes for marriage too. I just wish people would appreciate and understand the difference between forced labour and choice.

It is no news that not many workers are 100% happy with their jobs and if they had a choice, many would gladly change jobs. I then wonder at those who scream that sex workers do not like their jobs, therefore sex work should be criminalized.

It is annoying when the excuse “but they hate their job” is used to justify the clampdown on sex work and the harassment of sex workers. I mean, can you truly say you love your job and wouldn’t give it up if you won the lottery jackpot?

It is not just people in low paying or stigmatized jobs that might not be happy with their chosen profession; high and medium income earners like bankers, doctors, lawyers, receptionists, nurses or soldiers could also hate their jobs.

There are people, especially immigrants, with Masters degrees and PhDs who work in chain stores like Wal-Mart, Sainsbury and Tesco as security men and cashiers.  They are stuck with certificates that don’t pay their bills. No, they aren’t happy that they burn the candle at both ends to pass their exams, paid huge fees to meet the expenses of graduate schools but still end up stacking shelves at Tesco. Many are forced by economic, political and social situations to settle for jobs that would at least pay their bills.  Some go into arranged marriages just to keep a roof over their heads, while some settle for commercial sex work.

Many people are choosing to be Interns and Volunteers because it fills the void before they finally find paid employment. Gone are the days when people do volunteer and internship work just to help out; now it is because they can’t get a job and it also looks good on the CV. Volunteering for many is now basically like doing good to earn ‘Paradise’ points on your card so you can make it to Heaven and live happily ever after with Sky daddy.

If some people decide that they’d rather jerk off in front of a webcam and be paid for it than take up a job as a Wal-Mart assistant or volunteer for a job they really should be paid for doing, respect their choice. Even if they won the lottery, there are people that would still wish to work as sex workers.

It is really none of our business what consenting adults do with their bodies, I cannot see how my being a feminist means I must hate sex work or try to save sex workers. Sex workers can also be feminists and there are sex workers who are feminists. It is about choice, respect and rights

Just as I say with my sexuality, your approval is not needed. And this is what sex workers are saying. They do not need feminists’ approval, what they want is RIGHTS like every other worker. And I do not think that is too much to ask for. Rights not rescue!

Nigerian and Ugandan Lawmakers: The Passing of the Anti-Homosexuality Bills » « India and the Re-criminalization of Same-Sex Relationships