It is not art, it is an outlet for him and his fellow racist, privileged white people to enjoy voyeuristic, closeted racist pleasure at the expense of END_OF_DOCUMENT_TOKEN_TO_BE_REPLACED

Lesbians, Gays, Bisexuals and Transsexuals from countries where their sexual orientation and/or gender identity is criminalised need international solidarity. What we do not need is seeing international leaders who claim to support our fight for LGBT rights wine and dine our oppressors.

When we watch international leaders who are supposedly LGBT allies frolicking with our oppressors, the message we get is that we do not matter. In the long run, it is all about their politics, not their words. International leaders should please WALK THEIR TALK.

Below is a video of my interview on SkyNews on the topic LGBT Rights in Africa and why we need international solidarity. END_OF_DOCUMENT_TOKEN_TO_BE_REPLACED

If I say #BlackLifeMatters and your response is “Why not EVERY life?” Unfollow me. You dont get it & I dont have time to explain it to you.” 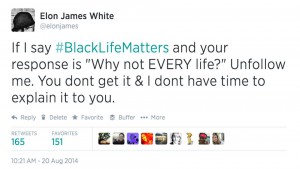 I came across the tweet above and i had to say, “Well said, Elon James White, well said“. Unfortunately this kind of tweets always get some of my white friends on facebook in a twist. What is so unfortunate is that some of them think they are well meaning people who want equal rights for all. If only they would take a minute to do their research and understand how the society they live in works. Everyone should learn to see their own privilege, be it skin colour, sexual identity, sex birth, geographical location, religion or class.

To be blind to your privilege is to not understand or see how you benefit from the society due to your status, a status you might not be conscious of but which is enough to deny the persons who don’t have that status the benefits you get. Heck, it might even cause the persons their lives while you go around not even acknowledging that you have that privilege. Yes, it is frustrating.

How did you get to where you are today as an LGBT activist and out bisexual woman?

It has been an interesting, tasking, journey towards self-awareness. It is also a journey that has involved studying society and finding my place in it. It is a continuous journey and one where I have to constantly remind myself that I have a right to be who I am in a world that is desperate to make me into what they would rather I be.

I started being politically and socially aware of my human rights at an early age. I was born in Nigeria in the mid-70s and grew up in a society that was marred with constant military coup d’états. There was no stable democracy. It was confusing because people took to the streets to celebrate successful coup d’états. I wondered why it was a good thing for the military to forcefully overthrow elected officials. But the people’s response was that the elected officials were corrupt. However, after having a taste of what military dictatorship means, people stopped celebrating coups. This started the difficult journey towards demanding and organising for a civilian regime where they would have a say in electing their own political leaders.  END_OF_DOCUMENT_TOKEN_TO_BE_REPLACED

I am also loving all the good wishes coming my way from family members, friends and fans.

Even Google took time to send me birthday greetings in the form of a lovely personalised doodle. Yeah, I know they probably do this for everyone END_OF_DOCUMENT_TOKEN_TO_BE_REPLACED

I always thought if I were ever to be attacked by someone I only knew from social media especially Facebook, it would be by a homophobe, biphobe,

transphobe or a religious fanatic who didn’t like my LGBT rights advocacy or anti-religion posts. Never in my dreams would I have thought I would experience a physical attack and verbal abuse at an atheist event from a female Facebook friend who identifies as a feminist and an atheist!

Until now, my casual encounters with people who only knew me from Facebook have been positive. From the ones I ran into in London tubes to the ones who excitedly introduced themselves as my fb friends at social events or gave me heartfelt hugs at London pride, it has been positive experience until now. Get ready to hear the full gist, don’t forget to get your popcorn! END_OF_DOCUMENT_TOKEN_TO_BE_REPLACED

Richard Dawkins ill-informed attempt to grade rape triggered discussions and heated debates on the issue of rape. Sure enough, rape apologists and victim blamers used the opportunity to proudly show off their self-inflicted ignorance and bigotry on the issue of Rape. It was also another avenue for hero worship. I did get some very worrisome responses on my Facebook wall to my blogpost RichardDawkins@Confused.Com: No one said you endorsed rape, what you did was grade rape and that is appalling. It also exposes the fact that many are actually happy to blame victims but won’t admit that they are rape apologists.

I plan on making some of these discussions into a blogpost but first I need to get this very misguided, unconscionable comment made by a proudly ignorant person out of the way.

I was delighted when the beautiful, multi- talented Ms Sahhara was declared the winner of Super Sireyna Worldwide, 2014 at the grand finale in 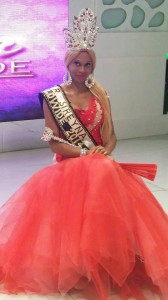 Philippines. She also won the best Talent award and her national costume was fabulous!

Ms Super Sireyna is the most watched Transgender Beauty Pageant on Philippine Television, Eat Bulaga. The pageant aims to showcase the beauty of Super Sireynas and to foster camaraderie amongst contestants and Sireynas worldwide. It grades contestants on looks, talent and wit.

Ms Sahhara is a Nigerian Trans Woman who resides in UK. She is very visible on social media. She uses her social networks to advocate for LGBT Rights and promote Trans visibility. She entered the pageant as Miss Nigeria.  Her interview section was great! She answered her questions with poise, intelligence and was witty to the core! She also used the platform to highlight the problems LGBT Nigerians face due to criminalisation of their sexual orientation, gender identity and the negative societal attitudes towards LGBTs.

In her entry video for the competition Super Sireyna Worldwide Nigeria 2014, she explained why she was competing. She stated that if given the chance to wear the crown, she will use the opportunity to enlighten people about Trans’ issues. She believes if people don’t understand things, they should ask questions. The video was made as part of her preparation for the competition. She obviously prepared with passion and dedication for the pageant. It wasn’t just about beauty, it was also about talent, creativity and passion. The video is quite informative and worth watching. END_OF_DOCUMENT_TOKEN_TO_BE_REPLACED