The aftermath of a tragedy always see many people praising ‘God’ for how they managed to escape and survive the tragedy. From natural disasters like the fatal earthquake in Haiti, Tsunami in Japan, Tornadoes in Oklahoma to the very avoidable road accidents and man-made plane crashes in Nigeria, many always come up with the “Thank God I survived” and “God knows best” supplication. 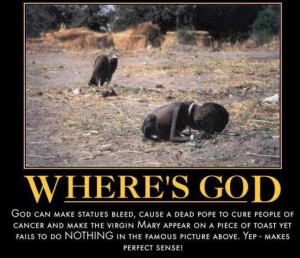 Do people ever pause to really comprehend how selfish and distasteful this statement is? There you are, staring at the burnt remains of humans from a fire accident, grossly twisted bodies of innocent children from a car accident, pieces of charred human flesh scattered at a bomb blast scene or your neighbor’s body, half buried under a pile of debris caused by a natural disaster and all you could say is, thank God it wasn’t you. Really?

Yes, you might be glad that you are not one of the burnt persons, that your child is not the grossly twisted child who groaned and screamed in agony but should you not save your ‘Thank God’ supplications for the privacy of your room when only you and your ‘God’ is present?

How do you think it seems to the family of those bereaved when for example:- 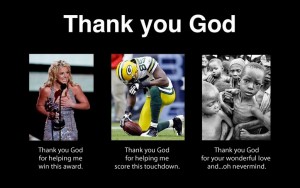 You say that it is not your portion, but then whose portion is it? Did your God gleefully assign the portion of death by fire, air crash, burning buildings or natural disasters to others while this God anointed YOU with the portion of “You shall be part of it but shall not die so that you can live to testify to my goodwill and glory”?

Oh, I should save my breath but do you really think of your God as a childish, bigoted, selfish, egoist being who  kill people just so you should have the opportunity to thank him and appreciate his glory the more?

Is this really the image of the God you want to sell to me? Hmm…Actually, yes, this is the image of the bloodthirsty Abrahamic God as portrayed in the Holy Bible and Holy Quran, but really, do you still want to keep making Gods in your own sadistic, bigoted and egoist image?

I am often astounded by the reasoning of my people. The National tragedy of Dana Air 992 that crashed in Lagos on Sunday 3 July 2012 brings it all up again. A pastor was amongst the 153 onboard passengers of the crashed plane and a few members of the congregation raised the question of why God should deem it necessary to take away their beloved pastor in such a gruesome manner, as usual the responses were admonitions like:- 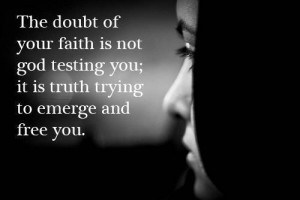 What is it about my country people that make them so afraid of questions and confrontations? They are afraid of every authority whether real or imaginary! Does their precious bible not say something like ‘Seek ye the Truth and the Truth shall set you free’? Why are we so afraid to open the Pandora’s Box even if it contained unpalatable truth that could set us free? Why should the truth box be a ‘no go area’ especially where questions of religion are concerned?

Now, if I had any superpower that would have allowed me to prevent such a terrible accident, of course I would use my superpowers even if it cost me the last reserve of my superpower. I mean, is that not the stuff heroes are made of? Always ready to help humanity, anyone in need even if it means going that very extra length? Isn’t that why we love Spiderman, Superman, Voltron, Wonder woman and all great action heroes and heroines?  Why can’t we expect same of God?  Is God not a hero or is there a double standard for heroes?

This leads me to Epicurus age old unanswered question:-

”Is God willing to prevent evil, but not able? Then he is not omnipotent.

Is he able, but not willing? Then he is malevolent.

Is he both able and willing? Then whence cometh evil?

Is he neither able nor willing? Then why call him God?”

Omnipotent– He could have stopped the accident from happening.

Omniscient– He knew that plane was faulty and could even have rectified the fault if he wanted.

Omnipresent– He was present during those agonising minutes and heard the heart wrenching cries of the people; definitely many would have called out to him in their desperate hour of need while that plane dived to its death. He could have stopped the disaster but chose not to.

Please, do not say it is because of an original sin committed by a woman  made from the rib of a man, who was tempted by a talking snake to eat a forbidden fruit planted by the Creator aka God, in the garden of Eden! That is an absurdly ridiculous story for adult bedtimes!

And nope, God works in mysterious ways does not cover this and actually it covers NOTHING!

Saying “You can’t understand because your eyes are blind to the truth” is also a terrible cop-out, it is not an argument, just a sad way of avoiding a logical debate.

Really God Knows best? And that is supposed to be a comforting statement?

God knows best, that is why he allows so much suffering, air crashes, cancers, famine, natural disasters etc. Yeah, God knows best. I truly will never understand how that can be a comforting statement.

Saying God knows best in the face of disaster is itself admitting that this God knows nothing, is bigoted, is evil or just plain don’t exist.

If your neighbor set your child on fire, you don’t stand there and say God knows best… that would be sick! It is just another way of saying   “I have given up on understanding this nonsense!”

When next you say God knows best, you are practically depriving yourself of the power to make a change.

God knows best is itself a calamity statement. Whether you believe or do not believe in the existence of a God, God knows best is a statement that robs you of your power to make a change. If we truly desire a change, a positive change in the fortune of our country, we have to start thinking of making that change ourselves and not leave it up to a deity, real or imagined to make that change on our behalf.

Why do you think this Deity/God would change His/Her/Its plan just to suit you anyway? 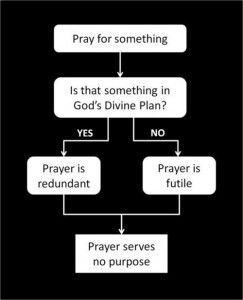 Why not take your own destiny into your own hands and mold it?

Why not challenge authorities that imprison you physically, emotionally, spiritually and mentally?

The greatest prison is our minds, the most difficult chains to let go is the chains of mental slavery and we are never truly free until we let go of the prison of our mind.

Be not afraid to question.Your question is not a doubt of your faith but the truth slowly emerging to set you free!

When next you feel the urge to exclaim “Thank God I survived” after a fatal disaster, remember that your God had no business allowing that disaster to happen in the first place. If your God had no control over the disaster, why call him God? Why assume God saved you? Why rub it in the faces of others whom your God didn’t love enough to save from the disaster? Why be as self-centered as your God?

Accents and the Tragedy of Self-Hate » « I AM A WOMAN AND I AM WEEPING!