It was widely reported that:

“Anglican Bishops in Nigeria and the entire Bishops of Anglican communion in the entire Global South has threatened once again to pull out from the Church of England, if the Archbishop of Canterbury continues to recognize gay marriages, homosexuality, lesbianism and all other forms of social vices that permits same sex marriage.

The Bishop of Enugu Diocese, Church of Nigeria, Anglican communion, Rt. Rev. Dr. Emmanuel Olisa Chukkwuma said the entire Bishops of Anglican communion under GAFCON, which covers the nations of the ‘Global South’ spoke with one voice, stating that the sanctity of the Marriage institution as prescribed in the Holy Bible, which says it must be between a man and woman, must be maintained without compromise. 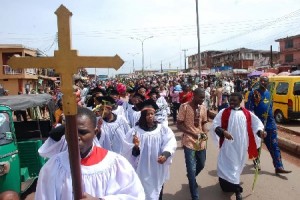 It is pathetic that the people whose ancestors were forced to practice a foreign religion at gun point now defend same religion with such vigor that they even claim to know more about the religion than those who forced it on their ancestors.

As the Yoruba adage says- “Eni to ri nko e, to fe ku pelu e o, owo eni to ti sonu nko”. (Roughly translated as – When a person who finds a lost item belonging to another  holds tenaciously onto it, in a ‘do or die’ manner, what about the person who originally lost the item?)

Laughing and at the same time shaking my head at the utmost stupidity of those Nigerian/African Anglican leaders.Just secede and stop making ignorant noises! I’d say good riddance to bad rubbish.

Obviously these Bishops are not very familiar with their Bible because if they were, they would know that there are many types of Marriages approved by their Precious Holy Book including but not limited to- END_OF_DOCUMENT_TOKEN_TO_BE_REPLACED

A few days ago, I posted this status update on my Facebook wall:

I was just on the phone with my Nigerian, UK based learned colleague who is a well established immigration lawyer in London, he was upset because a potential Nigerian client just informed him that he wouldn’t be needing his legal services anymore. And the reason? Well, the client’s wife, also a Nigerian, said she does not want a black person to handle their case. Note, she said ‘a black person’, not just a ‘Nigerian’, but a ‘black person’.

Denying anyone employment because of the colour of their skin is actually a crime in UK. If a white person had said this about a black person, it would qualify as racism, but how do one even describe this kind of self hate Persons of Colour throw at fellow Persons of Colour?

I told my friend it was their loss because they just missed out on having a good lawyer take their case, but really, when will black people shed their chains of inferiority complex and emancipate themselves from mental slavery?

I am so tired of hearing Nigerians in UK proudly talk about how they will never employ another Nigerian. They go on and on about a bad experience they or someone they knew once had with a Nigerian employee. With such hateful attitude towards our own, what right have we got to complain when the white person treats us just the way we treat our fellow black persons?

Well, October is black history month, it is time to lose that self hate along with the residual mental slavery!

When I made the post, I was not expecting a debate on ‘reverse racism’ and ‘black on black’ racism. It was basically to draw

attention to the self-hate, inferiority complex and prejudice which many of my country men and women are afflicted with. Many have imbibed the belief that their skin colour, culture, gods, brain, accents and everything that is black is inferior. These are effects and byproducts of racism.  This kind of attitude or reasoning from fellow black persons, especially Nigerians, just beats me. It tells of a deep seated inferiority complex and self-hatred that the perpetrators do not even know they suffer from.

Racism and self hatred isn’t exactly the same thing. Racism is an institutionalized thing, and it needs an openly or covertly supported power structure to survive. This is basically an internalized case of self hatred and discrimination. Unfortunately it is not a rare thing amongst PoC especially Nigerians.

Unfortunately my white friends on FB who decided to weigh in on the discussion immediately called it racism. They were eager to tell of how they or a white friend they knew once experienced racism from a black person. They eagerly gave examples of how Persons of Colour perpetrate  racism on other persons of colour. A female white friend even claimed that she has personally experienced racism by virtue of being married to a black person. She wrote: END_OF_DOCUMENT_TOKEN_TO_BE_REPLACED

Wash away my fears

For a fresh start

Drain away my pain END_OF_DOCUMENT_TOKEN_TO_BE_REPLACED

She reminded me to thoroughly check the inside of the van to make sure none of her things was (intentionally or not) left behind in the van. She then added “They are Jamos, so make sure you check”. ‘Jamos’ is Nigerian short term for Jamaicans. Needless to say, I was irritated at this.  I mean, what has their nationality got to do with how trustworthy they are? I know she would still have insisted I check the van if the van removal drivers were Nigerians, Americans or Britons. But I doubt if she would have added their Nationality for emphasis. Well, If they were fellow Nigerians, she probably would have added that, but if they were Britons, I doubt she would. Yes, I did call her out on this as I am not a fan of discrimination of any kind. END_OF_DOCUMENT_TOKEN_TO_BE_REPLACED

They say it is culture

I say it is torture

Born a woman, a reason to be oppressed

It is culture, a woman must be suppressed

I must never be too forward

They will only drag me backward

As a woman I must learn to be submissive

For a man has the power to be dismissive

I must be subjected!

Different meals I must prepare

That’s what makes me special

They say teas I must make END_OF_DOCUMENT_TOKEN_TO_BE_REPLACED