I used to feel so sorry for the child but also I was terrified to go near him for fear of ‘catching’ this sleeping disease. I felt sorry for him because he could not have been END_OF_DOCUMENT_TOKEN_TO_BE_REPLACED

There is this unfortunate trend in social media where calling out someone for their sexist, misogynist, and/or inhumane remarks is seen more as an invitation for a fight rather than an opportunity to engage in rational discussion. Many, especially women, are discouraged from calling out sexist, misogynist, or stereotype remarks made by friends on social media like Facebook or Twitter, for fear of being tagged as the “type of feminist that gives feminism a bad name”.

There seems to be a renewed effort to tag outspoken,social justice conscious women as aggressive, judgemental, over-sensitive ‘bitches’ who just want to ruin everyone’s fun. It is particularly sad that this type of silencing technique is becoming even more prevalent in the Humanist/Atheist space.

November 17th-24th is  anti-bullying week and I pledged sometime ago not to be a bystander when I witness bullying. Of course, this has somehow earned me a reputation as the “fun ruiner”, especially amongst some of my fb friends.  Whenever i post or comment on such issues, it is at the risk of being referred to as the “type of feminist” they don’t like. Therefore, such discussions tend to irritate some ‘friends’ and many do get aggressively defensive when called out. However, i am sure that those who resort to aggressive behaviour when called out on how they treat others do not deserve the space they occupy on my virtual/real friendship list, simples.

I was shocked when I came across the status update below from a somehow close FB friend who identify as humanist and feminist: END_OF_DOCUMENT_TOKEN_TO_BE_REPLACED

When I watched the street harassment video titled 10 Hours of Walking in NYC as a Woman, my first thought was, forget 10 hours, that is my experience as a woman 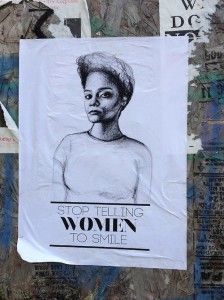 walking the 10 minutes distance to my gym!

Catcalls and street harassments are daily experiences many women have learned to live with. Many of us have spoken out against this experience many times. However, are we ever taken seriously? No. Instead, trolls invade such posts with excuses like “Not every man”, “I am not your kind of feminist”, “This is why I hate feminists”… blahblahblah

Therefore, I was actually happy just to see a video documenting an actual experience of catcalls and street harassment going viral. In all honesty, I was not looking at the skin colour of the guys in the video, I was more about their words and often I went,  oh, I have heard that or oh that is a popular one. I guess to me, my street harassers have one thing in common, they are men, they say the same shit, they want control, they treat me like objects, and they feel entitled to my body. They are men that feel entitled to my time, who feel they must compliment my body and they get annoyed when I don’t beam at their validation of my beauty. They get angry when I don’t smile when they command me to smile on the street while going about my errands, some even get violent when I don’t reciprocate their unsolicited attention. They do all these regardless of their skin colour. So nope, I was not watching out for skin colour of my everyday street harasser in that video because what binds street harassers together is not their skin colour but their male identity, male privilege or better put, misogyny.

However, I was glad when people started pointing out the racial aspect of the video, especially when the maker of the video was exposed for a similar racist editing he had done in a previous ad video and also a homeless man makeover ad video.  The discussions were good and enlightening.

However, as a woman who is very much affected by this catcalling, street harassment culture, I am worried that in an attempt to call out racism, focus is being taken END_OF_DOCUMENT_TOKEN_TO_BE_REPLACED

righteous fury of West Africans, protesting the audacity of an international white celebrity chef, who dared to plagiarised (and badly so too), West Africa’s much beloved dish, Jollof Rice. To an outsider, this might seem like much ado about nothing, but hey jollof rice is not just any rice, it is a national treasure, a national signature, and as #Jollofgate fury has proved, it is an African pride. Touch our Jollof rice; we will come at you with united fury! END_OF_DOCUMENT_TOKEN_TO_BE_REPLACED