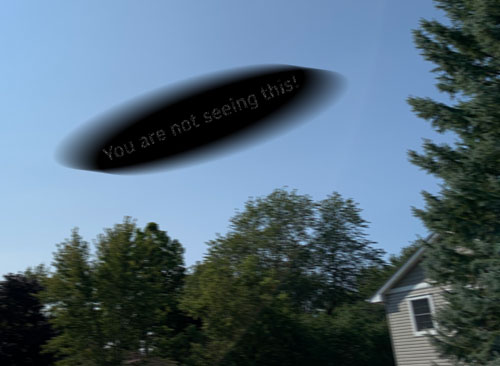 A decloaked UFO flies over Palatine.

Rising public interest in both UFOs and Unidentified Aerial Phenomena is forcing Chicagoland’s three UFO bases to revaluate their staff of professional skeptics.

“We’re in a debunking crisis,” said Theresa Z. Theil, Director of Concealment Operations for  Peotone UFO Base.  “60 Minutes is taking UFOs seriously.  The government is about to issue an unclassified report on UAPs.  Ex-government officials can’t keep their mouths shut.  Meanwhile, we can’t find enough people to hold a SkeptiCamp.”

According to an Ipsos poll from 2020, 45% of US residents believe UFOs are real and have visited the Earth.  Public belief in UFOs started declining in 2014, and many UFO interest groups folded by 2018. Then sightings increased in 2019, skyrocketed in 2020, and are still increasing.

Reid Ottesen, Palatine Village Manager and Director of Rob Sherman UFO Base explained: “Both sides are building UFO Bases, but both sides aren’t coordinating their coverup efforts.  Additionally, it didn’t help when the Committee for Skeptical Inquiry defected from the New World Order to the Illuminati.  I’m still trying to hire replacement skeptics, and I’m offering more than $15 an hour.”

Ottesen hopes stricter enforcement and improved cloaking technology will help Sherman UFO Base maintain a low percentage of sightings.  According to Ottesen, he’s already doubled the number of disciplinary hearings from 2020:

“Yesterday, I fined three crews for reckless piloting.  Not only were they sighted, but Patch mentioned them.  Sure these were steep fines, and we now have liens on their ships, but they deserve it for flying uncloaked for ten minutes with their landing lights on!”

Bolingbrook’s Clow UFO Base has its own staff of skeptics, as well as representatives from The Skeptics Society, and Committee for Skeptical Inquiry.  Clow spokesperson Donna K. Smith says Mayor Mary Alexander-Basta will be conducting a “routine reevaluation” of Clow’s debunking protocols:

“Because Clow is the largest urban UFO base in the world, we are constantly innovating our public concealment efforts.  That may or may not reduce our reliance on contract skeptics.”

Despite officials denials, the Babbler managed to obtain an email from Alexander-Basta to CFI and the Skeptics Society demanding improvements:

“It’s very clear to me that your skeptics are suffering from severe mission drift.  They seem to think their mission is to protect Western Civilization from ‘Wokeness,” when they should be covering up security breaches.  From what I’ve seen, they’re doing both jobs poorly.  I doubt they could have covered up the illegal UFO base that was in South Elgin. Maybe I should hire PZ Myers instead.”

A receptionist for Alexander-Basta said she wasn’t working that day and was unreachable.

“I knew I would find you here,” said Marschke.  “You’re using the waiting area as your second office.”

“I don’t know what you’re talking about.  I am but a humble constituent, who just happens to be eight hours early for her scheduled meeting with the mayor,” said Spencer.

“Do you really think I’m that foolish?” asked Marschke. “Don’t answer that.  I just need to know if your lackeys sent out fake texts to voters telling them that we were going to abolish the township?”

“Maybe isn’t good enough.  I want to know why you lied.  You know we campaigned on adding services, not abolishing the township.  Can you at least come clean about your lies?”

“I neither confirmed nor denied that I lied, or that I bought the same list of registered voters that you bought.”

“I’ve only been in office a few days, and I’m already sick of your billionaire client and you.  Why does he hate townships?  Is it because we help people?”

“I think your client desperately needs the mental health services we’re going to provide our residents.”