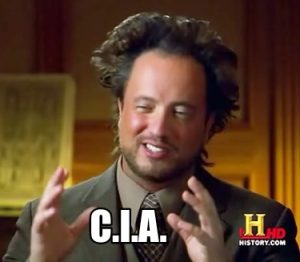 We’re suffering from a spate of UFO reports…endorsed by the CIA and the military. This is a bit like hearing that the president believes the Earth is flat, or senators babbling about how evolution is false.

Anyway, suddenly there are all kinds of unconvincing videos from military planes flooding media. I’ve looked at a few — they are garbage. It’s as if people who are supposed to be good at distinguishing camera artifacts from actual stuff on the ground or in the sky have lost the ability to see common noise and optical problems. I saw one video where the supposed UFO was just plain old ordinary bokeh. You don’t have to be super-sophisticated to debunk this stuff, which means, I guess, that CIA directors aren’t particularly knowledgeable.

Late last year, former CIA director John Brennan, appearing on a podcast hosted by George Mason University economics professor Tyler Cowen, said it was “a bit presumptuous and arrogant for us to believe that there’s no other form of life anywhere in the entire universe.”

Yes? I believe there is almost certainly other forms of life in the universe. The hard-to-swallow bit is the idea that they’re here.

And last month, former CIA director R. James Woolsey said in an interview with the Black Vault, a website that collects paranormal sightings, that he wasn’t “as skeptical as I was a few years ago, to put it mildly, but something is going on that is surprising to a series of intelligent aircraft, experienced pilots.”

I’ve known a few pilots. Nothing about their occupation requires particularly deep intelligence (nor is it antithetical to being smart). Even if they were super-geniuses, you should still be skeptical of the reports. Have none of these people even read Feynman?

Hey, why is a former CIA director giving interviews on “a website that collects paranormal sightings”?

The authenticity of the videos has been confirmed by Pentagon officials. Some of them were recently featured on “60 Minutes.”

I have looked at these videos, and they actually truly are videos, rather than hallucinations. There. Confirmed.

I suppose this could also mean they have confirmed the sources, and they weren’t made by guys photographing pie plates thrown in their backyard. What they haven’t confirmed is that they are videos of alien spaceships.

“I’ve seen some of those videos from Navy pilots,” Brennan said, “and I must tell you that they are quite eyebrow-raising when you look at them.” He added, “I think some of the phenomena we’re going to be seeing continues to be unexplained and might, in fact, be some type of phenomenon that is the result of something that we don’t yet understand and that could involve some type of activity that some might say constitutes a different form of life.”

Right. Bokeh. Lens reflections. Sensor artifacts. Brennan doesn’t understand optics. There is almost always an alternative, mundane explanation that doesn’t involve faster-than-light travel by intelligent aliens who are cruising our planet in flotillas of glowing spaceships, yet somehow are incredibly concerned about not being seen, which is why they look like flares dropped from airplanes.

Of course, eventually we figure out why all these people are being gullible and foolish. It’s about money. All it takes is a few easily fooled people with access to government funds to open the purse strings and fuel all kinds of nonsense.

It only took about 10 minutes to persuade his colleagues, Stevens and Inouye, to support approximately $22 million in funds for the Pentagon to start a program to investigate. Stevens was a particularly easy sell, [former Senate Majority leader Harry] Reid recalled, because as an Air Force pilot during World War II he had seen some pretty weird stuff, including an object that didn’t appear to be a plane that mimicked his movements in the air.

Here on planet Earth we call those objects “reflections”.

All right, for $22 million I’d be willing to highlight ambiguous videos, shrug, and declare in interviews that “well, it could be aliens.”

Would you pay me $2.2 million for the service?

Save our spiders! » « I’m not gonna believe what isn’t there