MAY 17 is International Day Against Homophobia, Biphobia and Transphobia (IDAHOBIT). It was first celebrated in 2004 to draw attention to the discrimination and violence experienced by Lesbians, Gays, Bisexuals, Intersex and Transsexual people for their sexual orientation, gender identities and characteristics. IDAHOBIT has since become a global event celebrated in many countries. This year’s theme is Together: Resisting, Supporting, Healing! 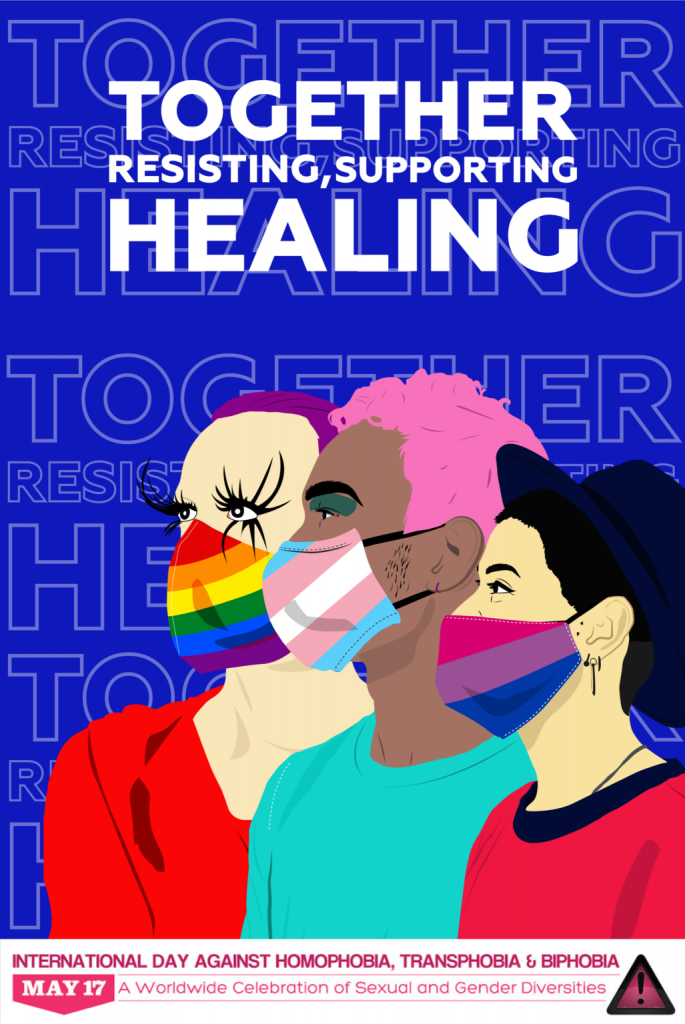 On May 17, World Health Organisation (WHO) declassified Homosexuality as a disease. May 17 (IDAHOBIT) was specifically chosen to commemorate the decision.

31 years after WHO declared that homosexuality is not a disease or mental disorder, in 70 countries, it is still illegal to identify as LGBT+ and in 12 countries, you could be given the death penalty.

Although many would say it is getting easier to identify as gay and that lgbt + people are no longer stigmatise. However, the truth is this is not the reality for many lgbt+ people across the globe, including in the UK.

1.5 billion people live under regimes that deny the right to love.

Same-sex relationships are currently illegal in many sub-Saharan African countries. Sodomy law is a colonial legacy inherited by former British colonies, a law which many have not abolished. Roger Jean-Claude Mbede was a camerounian who was imprisoned for sending a text message declaring his love for another man. He died in prison. Eric Lembembe was another Cameroonian prominent gay rights activist brutally murdered Dwayne Jones, was murdered in Jamaica after he attended a dance party dressed in women’s clothing. Corrective rape targeted at lesbians is still prevalence. This is not just in African or Caribbean countries. In 2016, the world woke up to the news of a mass shooting in a gay nightclub in Orlando, Florida. It was horrific homophobic attack where a gunman killed 49 people and wounded 53. Russian currently has many LGBT+ activists languishing in jail.

I am from a country where Same sex love is a criminal offence. In Nigeria, same sex relationships carry a 14 years’ jail term and advocating for LGBT rights attracts a 10 year’ iimprisonment. As a bisexual woman who had her life heavily impacted by this, I know first-hand the horrors criminalisation have wrought on LGBT+ people who live in societies where it is illegal to be your authentic, fabulous self. Being openly LGBT+ could be a matter of life and death.

There are many LGBT+ people fleeing oppression and violence across the world. Persecutions and discrimination have displaced many from their families, childhood friends, loved ones and support system. To start life afresh in an unknown land, they become refugees, a term which comes with its own stigma. There are many who never had the opportunity to flee an oppressive regime or the wrath of a homophobic, biphobic or transphobic lynching mob.

This week, I read about the heart-breaking case of a gay man, Alireza Fazeli-Monfared, brutally murdered and beheaded by family in Iran in what is known as ‘Honour killing’. He was just 20 years old. The family found out about his sexual orientation after they discovered the Iranian military exempted him from service because of “sexual depravities”. Basically, the discrimination against LGBT+ people in the military caused him to be outed with fatal consequences. A young life brutally cut short and unfortunately not the only one and would most probably not be the last one.

In 2020, Human Rights Campaign (HRC) reported there was a high increase in the number of transgender or gender non confirming people fatally shot dead or killed by other violent means, the majority of which were Black and Latinx transgender women.

Transrespect versus Transphobia worldwide (TvT) reported that 350 Transgender people were murdered, suffocated and burned alive in 2020. The list was sourced via local and national news stories. This is probably a tip of the iceberg as many hate crimes and deaths go unreported. Also, we cannot disregard the severe impact of Covid19 and lockdown on LGBT+ people in regards to hate crime and domestic violence.

IDAHOBIT is a day to recognise that lgbt+ people still suffer persecutions in many parts of the world. It is a reminder to stand up and say no to hate and promote policies that help dismantle discrimination. As the founders stated, the main purpose of the May 17 mobilisations is to raise awareness of violence, discrimination, and repression of LGBT communities worldwide, which in turn provides an opportunity to take action and engage in dialogue with the media, policymakers, public opinion, and wider civil society.

We must not assume all is well with the world just because we are not facing the same problems experienced by others different than us. In the workplace, on the streets, within the family, in schools and closed community groups, lgbt+ still face subtle and not so subtle discrimination, bullying, hate and harassment on a daily basis. Many are still afraid to come out of the closets for fear of what they stand to lose. 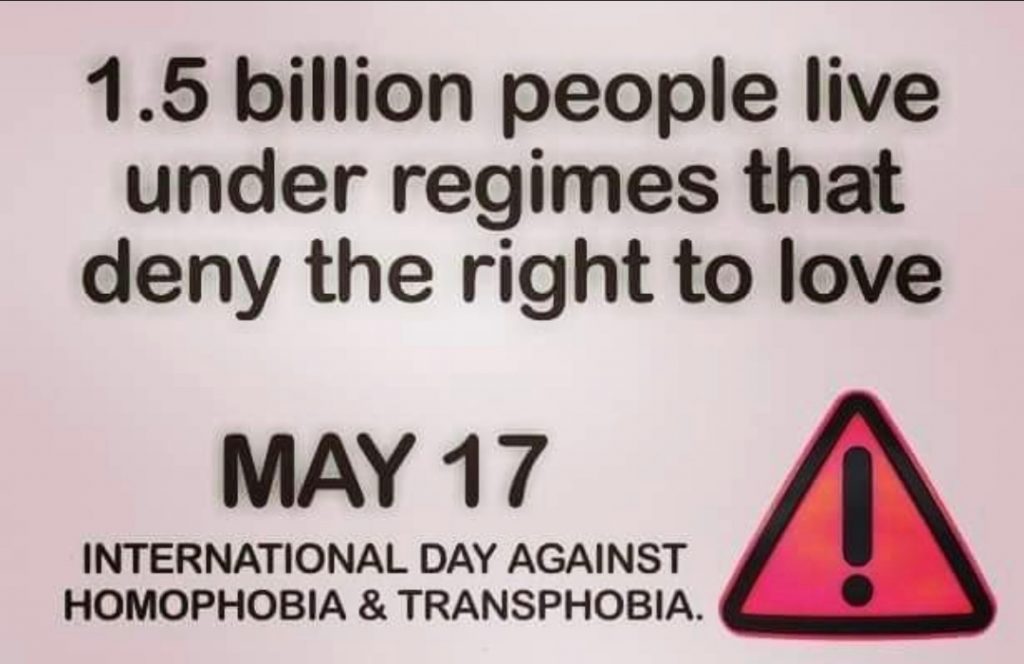 We must ask ourselves, how can discrimination be legal?

In the spirit of this year’s IDAHOBIT theme –Together Resisting, Supporting, Healing!, let us be consciously aware of the persecutions, discrimination, oppressions and violence others face which we might never experience.

Let us Resist these discrimination and persecutions.

Show your Support in words and actions, for the human rights of persecuted LGBT+ wherever part of the world they live or are from.

For Healing to cmmence, we need to show we care, are willing to stand up for freedom to love for all, and actively promote equality and human rights for all.

Together we must stand up for the voiceless lgbt+ people in solidarity and let them know they are not alone or forgotten. Together we can end all forms of oppression and discrimination.

Human rights are not optional. We are not free until everyone is free. As Dr Martin Luther king said, “An injustice anywhere is a threat to justice everywhere.” Happy IDAHOBIT. 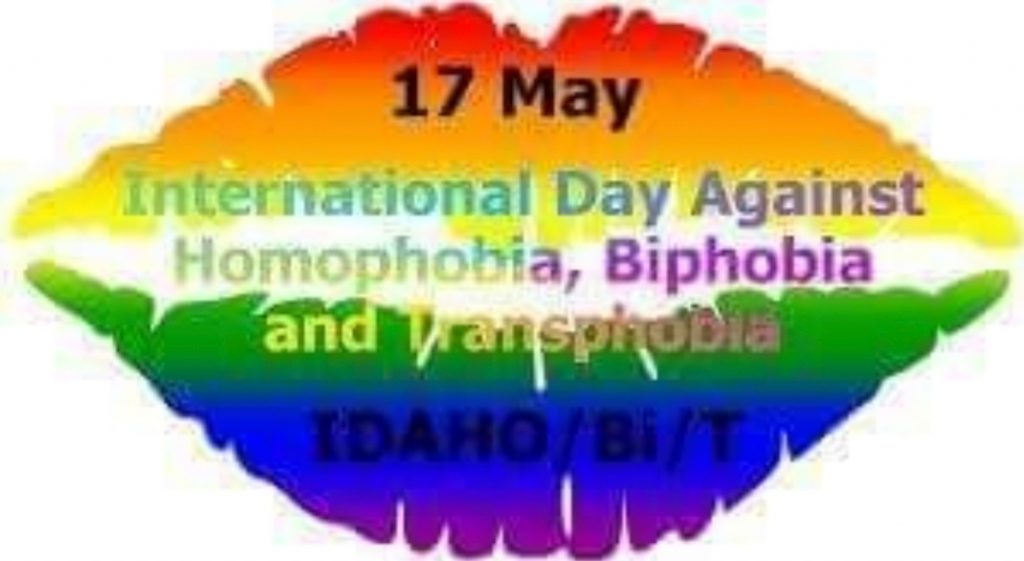 Racism is not a winning attitude; Kick it Out! » « 5 Things You Should Not Ask Bisexuals