I just completed another full year circle, Facebook as usual, notified my FB friends, not a bad thing , but on my facebook page, there is a very bold info that states that I AM AN ATHEIST, btw, if you are on my Facebook page as a friend or subscriber and you do not know that I am PROUDLY BISEXUAL, PROUDLY FEMINIST AND PROUDLY ATHEIST, wtf are you doing on my page?

Anyway, why do people feel the need to send me birthday greetings and prayers in the name of their God, even when they know I do not share their belief in a Sky daddy? This is simply rude!

Now, imagine you are a religious person, let’s say a Christian, and  you have it on your facebook info and other social networks that you are a Christian and you also regularly make posts on your wall about how Jesus is your only Lord and Saviour,  how every other god is fake because your scriptures says all other ‘Gods’ are  deaf, dumb , blind and you should not worship these carved idol images, then your birthday comes up,  and some ‘well meaning’ friends posts the message below on your  facebook wall:

“Happy birthday dear friend, May Sango be your strength, Ogun will protect you and your family,  Oya shall bless you, Osun will nurture your children, enjoy your special day in the name of Amadioha.”

Would you feel angry and/or disrespected? Would you just smile and say thanks or would you scream “Hey, do not bring your idolatry onto my page and certainly not into my life, fuck off idol worshiper!”

Well, that is exactly what I actually would love to say to those who, knowing that I am an atheist, still insist on sending me birthday prayers in the name of Jesus, Allah, Mohammed or whatever God(s) and prophets they worship. However, I didn’t say fuck off but said “Thanks” and decided to write this blog post, with the hope that this won’t happen again!

Yes, your prayers are meaningless to me, but when you insist on praying for me, YOU DISRESPECT ME. You just confirm that you are a religious bigot who wants to force your beliefs and unsolicited prayers down my throat. The fact is, such people simply confirm just how bad religion is and how it could turn a perfectly nice person into a thoughtless Zombie! You might be a well meaning person, but forcing your beliefs and prayers on me is rude and certainly not well meaning! 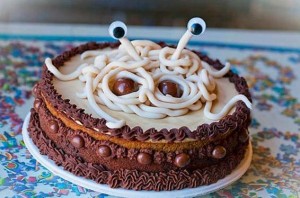 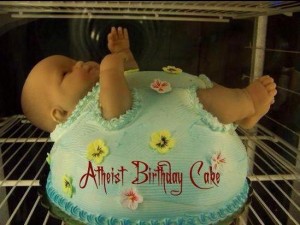 Society always advocate tolerance of religion and culture, as long as you are not tolerating anything that harms another, respect and tolerance is the key word. BTW, if you hold funny beliefs, do not expect people not to laugh at your belief, this is not intolerance or disrespect; funny things including funny beliefs automatically generate laughter from the discerning!

Now, listen to me, I am an Atheist, I am a human being with rights to Freedom FROM Religion, I deserve to have my Atheism respected by everyone including the Pope! Respecting my non belief does not mean you cannot bring forth logical , evidence based arguments against atheism, it only means you cannot force feed me your religious doctrines and certainly should not insist on praying for me. 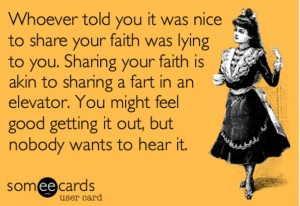 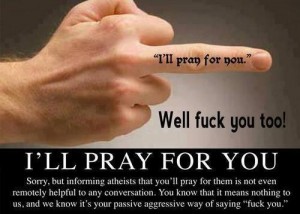 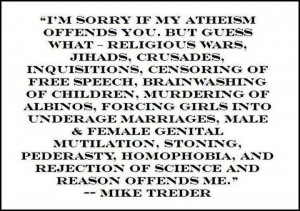 d started pouring libation to your ancestral gods, now is it so difficult to understand that IT IS RUDE TO SEND AN ATHEIST A  BIRTHDAY PRAYER?  Or do you think that Atheists do not deserve to have their non belief respected?

As an Atheist, there are many things I am already angry about, with justified reasons too,  what with religious people insisting on teaching the Creationist story of Adam, Eve and the talking snake as fact in public schools, religious fanatics itching to behead gays, stone women who commit adultery to death because their precious holy books say so and religious zealots influencing laws and state policies to fit with their religious beliefs…gawd, I got so many bullshits to put up with from religion and its shitty practitioners that I certainly do not need someone adding “forcibly praying for me”, to the unending lists of stupid and infuriating things religious people do to me!”.

So here are my birthday wishes and a lesson or two in ethics:

However, for a birthday present, you can deposit a huge sum of money into a Swiss bank account in my name, send the code to me and tell me GOD DID IT… I promise not to be angry!

BTW,this video was made two years ago and this post written last year. Good news is, this message got through to many on my Facebook. This year,  the birthday greetings are pouring in but only very few mentioned a Skydaddy and  almost no prayers, at least so far! This is great and Thanks!

The many faces of Jesus » « Not begging for my LGBT/Human Rights does not make me Aggressive, just Assertive. Deal with it! Part 2