Yes, it hurts me personally and in every humane way possible when abused children are not believed when they finally find the courage to speak out. It also hurts me to no end that in the part of the continent I come from, people define ‘child abuse’ in a different way and conveniently brush it aside by calling it discipline!

It is indeed sad that some Nigerians consider this case as ‘culture clash’ and even racial discrimination!

To many Nigerians, it is considered normal for pastors to accuse children of witchcraft and slap them in churches. It is considered OK  for prophets to take children to beach sides and beat them mercilessly while their parents shout “Hallelujah”, under the ‘acceptable disguise’ of casting out evil spirits from the children.

No, these are not rare occurrences, as I wrote in a previous post, these things happen almost every minute of the day, just visit Lagos Bar Beach!

Parents beat their children with brooms, cut them with sharp objects and inflict all sorts of injuries on their children and wards, all in the name of discipline and these are normally the same parents who steal in their workplaces and brag about their 419 activities in front of their children.

In public schools, teachers think it is OK to beat children in their care, the bigger the cane/rod, the more feared the teacher. Unfortunately many teachers and even parents in Nigeria do not appreciate that there is a difference between fear and respect. BTW, I attended a public school in Nigeria, so I know what I am talking about… and yes, cos of that experience I never allowed my child to go to a public school, even if it meant working myself to death to afford private schools where I can very well tell the teachers, “lay a finger on my child, I’ll get my child out of the school and we will meet in court!”.

No, abuse is not the same as discipline; transferred aggression is all too common in our society. Teachers and parents are not exempted and adults in authority tend to abuse the privilege since it is considered rude for a child to talk back or contradict an adult. 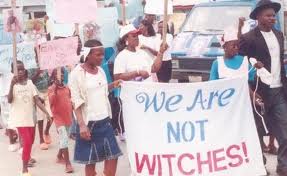 In the case of this couple, I would ask, were there injury marks on the bodies of the children? The article said there were, to quote the article-

Revealing scars the eldest said her mother had hit her with a cable, a broom, and a hoover and her father had dangled her by her feet down the stairwell of the house, tied her hands behind her back and her legs together ‘to get the devilish spirits out’, prosecutor Emma Smith said.
Her sister, who was seven at the time, had a stick shaped bruise of her thigh and after a few months in care, she drew a series of pictures showing her dad beating her and her being left home alone and including a speech bubble saying “I’m hungry”.

These are PHYSICAL and PSYCHOLOGICAL indications of child abuse.

Should the geographical location, race or skin colour of children determine whether the children have been abused? No, every child matters! If such abuses would never be tolerated from white parents, why should it be tolerated because the parents of the children concerned are black?

When we look beyond skin colour and race issues and look at every PERSON, first and foremost, as a HUMAN BEING with rights, respect and dignity, then we will understand that we ought to stand up for the vulnerable, without asking the question… “What is their race, gender or sexual orientation?”

My heart goes out this minute to every child experiencing child abuse and too scared to speak out and to those children who have spoken out but are being told to shut up by adults around them.

CHILD ABUSE IS NOT AFRICAN; IT IS SIMPLY CRUELTY TO CHILDREN! 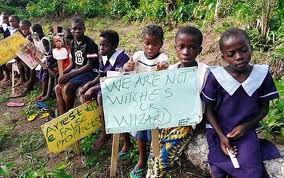