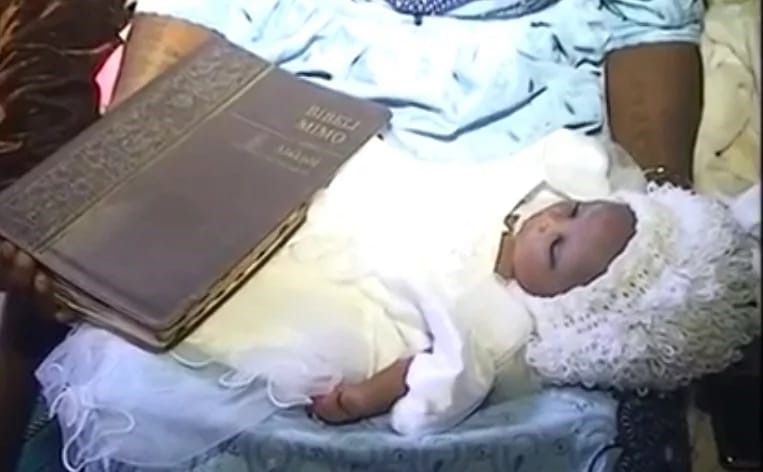 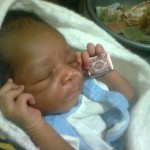 According to NTA, Adijatu Babalola, a mother of three, gave birth to a baby girl after she had delivered a bible in a mysterious way.

When interviewed, the proud mother said in the local dialect, Yoruba-

“When I was in labour, I supposedly gave back to a bible, when they took it to the church, and it was brought back, that was when I delivered the baby girl.”

“She called me “mama nurse, mama nurse, come and see this thing o!” And I see this bible inside of the woman’s uterus. That bible is small like this, but it was folded but by the time I put it down, it expanded”

The bible was small, then became bigger when lifted from the uterus. Lol! Holy Flying spaghetti monster, you can’t make this stuff up!

“I saw the bible, it was small, after I left, and came back, the bible had grown big.”

Yes, he saw it. He saw it with his two korokoro (candid) eyes!

“I saw bible, it was thicker than when I first saw it, just like hymns book”

Like “Iwe orin” (Hymns book). That got me laughing hard. Lol!

“I was there, I saw the mother, people were even rushing from all walks of life, they wanted to touch that bible and use the bible to pray”

I wonder if he would get a promotion and a new level of respect from Christian Association of Nigeria for the honour of the delivery of a baby with a bible in his constituency.

And oh, her landlord was not left out-

“I said, so you delivered a book, and she replied, “Yes that was what I delivered”, then I checked it, but then it was very small, when it was opened it, it was also small before it was wrapped”

I bet he wished it was a cheque book to cover all future rents!

The reigning monarch of the ancient town was not to be outdone in this incredulity, he described it as a good omen for the community.  Hear him-

“It is a sign of the almighty God sending signal to the town that this town belongs to him.”

Really? Silly, silly old goat, you are a shame to the throne you occupy! Your forefathers were dethroned, dehumanized, captured, enslaved and your ancestral land taken away by foreigners who brandished the same bible and forced it down the throats of your ancestors! Your ancestors who occupied that throne before your silly ass must be turning in their graves to spew curse on your colonized head and mentally enslaved brain!

This probably was the saddest part of the video for me. They took away your lands, took away your freedom, carted your forefathers off to foreign land to work as slaves via a ship named Jesus. Your ancestors were condemned to a lifetime of slavery and all its atrocities. Now, you claim your children come into the world holding the same book which is the epitome of your oppression as a black nation. Yet you celebrate this silliness with drum rolls and national news coverage. Why, oh why!

With such unbelievable gullibility and celebrated ignorance, how can there ever be hope for my once beloved nation, Nigeria, and the continent, Africa

I really do hate religion.

I hate the ignorance it perpetrates.

I hate that it contributes in keeping Africa a dark continent.

I hate religion because any society where religion reigns supreme can never know true progress. Women will always be oppressed, science will be scorned, reason will be discarded for myths and truth seekers persecuted for daring to question the words of God or Allah.

As I wrote here, this is Why I speak out against religion and this post here captured the Twenty reasons I am distressed by religion and its believers.

Adijatu Babalola said a donkey rider impregnated her while she was on business transit and since had not come around to take care of her. A pity the baby did not come with the contact number of his absconded dad, looks like the new mum could use it or she just found a better way to get to him and get back at him at the same time! 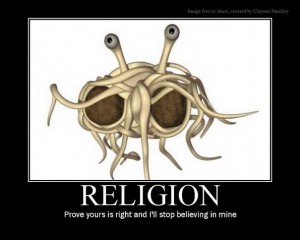 As an adherent of the great Holy Spaghetti Monster (May the Sauce be with you, R’Amen), I wonder if a woman is gonna give birth to a Colander?

Holy Flying Spaghetti Monster, it is time to show the world that you are the true, one and only God, time to have a woman (or let’s up it one more step, a man), give birth to a colander and boiled noodles, complete with the best tasting sauce ever and meatballs too. Yeah, oh yeah, let’s have this miracle, thou great FSM!