When the video of an angry mom beating up her son at the Baltimore protest went viral, Toya Graham, the mom who smacked her 16-year-old son, Michael Singleton, for joining the protest, became the face of good parenting and many lauded her as hero mom of the year.

It is disappointing that many hailed her action and called for more ‘black mothers’ to whip their ‘erring’ sons into line! Are we so desensitised to violence that we don’t see anything wrong with a parent hitting a child in anger? You cannot discipline a child when you are out of control, not thinking straight or blinded with fear or anger. Toya Graham was expressing anger and fear, she admitted, “I just lost it”.

It is never OK to hit a vulnerable person especially one you know will not/cannot hit you back. The 16-year-old boy did not resist; he followed his mum as she commanded, but that did not stop her from hitting him in blinded anger and fear.

As a single mum, i understand the urge to protect our children; however hitting a child is never the way. A look at the many messed up adult Nigerians who boast about being used as punching bags by their parents while growing up (an abnormality that is considered very normal in that neck of the woods), and use that to justify hitting their own children, tells us this is a vicious circle that does no good. Asked if the beatings or scars their parents inflicted as deterrents stopped them from doing the thing they were beaten for, many proudly admit that they simply found other ingenious ways of doing it without getting caught.

Hitting a child is never the solution, and hitting someone who cannot or are forbidden by culture or law to defend themselves against such attacks, is child abuse, domestic partner abuse or police brutality. No matter how much it is done out of love, it is still abuse.

When interviewed, Toya Graham said she hit her son because she did not want him to be the next Freddie Gray. This is very sad. It is saddening that black American mothers feel forced to hit their children to keep them safe from police brutality. However, hitting her son won’t protect him from being the next Freddie Gray, teaching him to cower in the face of injustice would most likely create more Freddie Gray, Trayvon Martin and Eric Garner. This only empowers the oppressors. Her son is not the oppressor. Freddie Gray, Trayvon Martin, Eric Garner and other young and old black men and women killed for the colour of their skin were not the oppressors. We should not have to hit or force our children to toe the line of the oppressors in order to keep our children safe.

If you do not want your 16-year-old son to get involved in protests or riots, it is fine and understandable. However, hitting your son in private or public is not the way to have that conversation.

Being “Proactive” about the safety of your child does not have to involve hitting your child out of fear and anger. Adults, be they mothers, fathers or guardians know that no reasonable conversation can be had when violence is the instrument of control.  Beating a child in desperation, anger, or fear does not make anyone a “hero mom”. 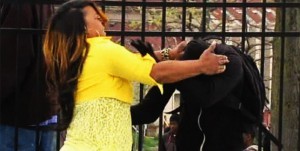 Smacking her 16-year-old son was framed as “saving him”. Being a control freak is not how you ‘save’ your child. This act of violence will not save her son from police brutality; after all, police brutality is the cause of the protests. The brave actions of those who stood up to say “Enough is Enough” is what could save her son and many other black men and women, from being another Freddie Gray.  There were peaceful protests before the riots broke out, the media ignored the peaceful protests, but when the rioters took over, the news spread like wildfire, and they got their voices heard. We can argue from now until eternity about the right or wrong of violent protests, but one thing is clear, “Those who make peaceful revolution impossible will make violent revolution inevitable.” However, the right or wrong of the protests/riots is not the focus of this post.

The mother is not a hero mum; she is a bully-mum. Hitting is not a reasonable way of holding a conversation with anyone, especially one who cannot defend themselves against such attacks. There are many ways to lay down the rules for a child; violence is not one.

It is so unfortunate that many African adults think of their childhood and what they vividly recollect is the many times they were beaten by their parents or siblings. Most times, amongst siblings, the beatings were not about correcting attitudes but about domination, asserting control and instilling fear in the most vulnerable members in the family. There is a big difference between respect and fear. We cannot earn respect by instilling fear in others.

From reports, Toya Graham told her son not to join the protests, but he did anyway. He obviously felt strongly enough about the injustice and police brutality in their town to put his own life at risk. His mother knew this, but did she have a discussion with him or did she just lay down the Almighty Mum order- “Thou shall not join your friends at the protest”? In what ways and manner did she explain the risks to her son?

Laying a good foundation for building a trusting relationship with one’s child cannot be achieved overnight, and it definitely cannot be achieved with threats of smacks and violence. This woman erred. She needs to control her anger and look at the larger picture. Her son might grow to resent her, while he just continues to smile for the camera in public.

Do mothers get a free pass to hit their children because they gave birth to them? This woman repeatedly hit her son out of fear and anger even though the son was not resisting. How many times have we condemned police officers when they hit people who were not resisting arrest? We do not “knock” someone into reality by hitting them, that would be child abuse, domestic partner abuse; it is known as violence. Hitting someone is not the way to have a conversation. Hitting a child out of fear and in anger is child abuse. Hitting is not a solution.

Children disobey their parents, it is part of growing up, and it is the duty of the parents to learn how to discipline their wards without veering towards child abuse. Child abuse is something we have to think about even if we are not parents. Child abuse happens around us all the time, while visiting family members, inside our neighbours’ houses, on the street etc. We do not have to wait to be rudely jolted into a position where we had to make a quick decision on whether to hit our child before we start researching the difference between child abuse and disciplining a child. Conversations about what constitute child abuse, what we have been taught while growing up, and what we have learned should help us be better prepared to handle these situations.

Some Africans have tried to hail her action by claiming, “Our parents whipped us and we turned out fine“. We should understand that, “This is how our ancestors did it” is not a reason to continue any practice, especially harmful practices. Culture is not a reason to commit atrocities. As I wrote in one of my earlier posts, Child abuse is not discipline or African, it is simply cruelty to children.

Making a split second decision to hit our child or lash out at a vulnerable person just because we were put on the spot won’t be the best way to react. “I was angry” or “I was afraid for his safety” are not excuses that justify hitting children.

Attempting to discipline children when we are in a state of anger, afraid or out of control cannot yield good results. We might not know how we would react as parents if put in certain hard scenarios, however it is good to give what constitute child abuse and discipline a thought. Also, it is not just about our children, it is about all the children facing child abuse. It is about being better prepared to recognise child abuse when we see it.

No matter how the media spins this, this is not the face of a hero-mum. This woman owes her son a heart to heart talk and a public apology.

Child abuse is not discipline or African, it is simply cruelty to children.

The curious case of Rachel Dolezal » « May Day: Organise not Agonise!