Is WeatherTech, one of Bolingbrook’s largest employers, developing liners to turn any basement into a nuclear fallout shelter? Some insiders insist they are, and WeatherTech hopes to distribute them in May.

“This marketing opportunity is too good to pass up,” said Stacy, who asked that we not use her last name. “Everyone wants protection from a nuclear attack, and WeatherTech is in the protection business. It’s a natural fit.”

Don, a WeatherTech materials specialist, explained that since rubber is resistant to radiation and WeatherTech’s products are made with rubber, it wasn’t hard to come up with prototypes. “The only problem is size. Let’s face it. A basement floor usually requires more coverage than a car floor.” 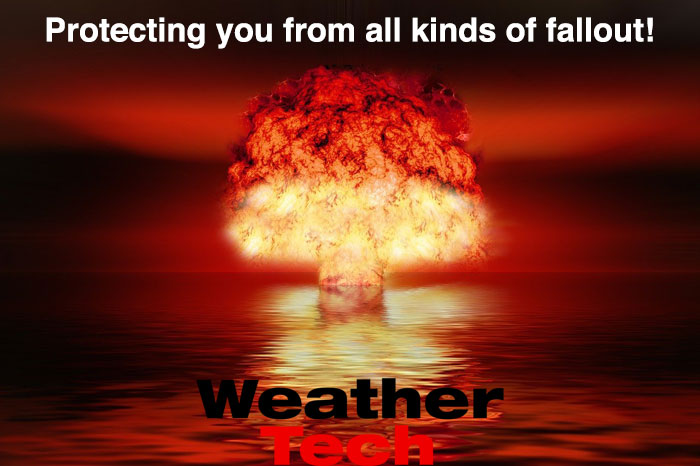 Is this an ad for WeatherTech’s newest product?

All the sources agree that WeatherTech will sell liners that can be cut to fit the shape of any basement. WeatherTech will also sell “NukeTech” glue to attach the liners to walls and ceilings.

“We hope we never go to war, but if you live in the suburbs, we think you can ride it out inside your WeatherTech enhanced basement.  We’ll even have a line of Faraday cages to protect your electronics. You’ll be prepped in style. Too much?”

Larry Z. Carter, a Bolingbrook resident trying to read every post-apocalyptic novel, says the liners are a good idea, but they won’t be enough. “There are so many things we take for granted. Like toilets, electricity, windows, access to ammunition, and grocery stores. WeatherTech has great rubber, but you can’t eat it.”

Paula X. Carter, Larry’s wife, asked Larry if he was going to visit her parents. He replied he needed to read another novel.

“By the time I finish one series, there are 15 more series released on Amazon. I can’t stop reading until they stop publishing. Trust me, one of those novels will come in handy when the world finally ends.”

Stacy claims the Village of Bolingbrook has already placed an order to turn Town Center into a fallout shelter. She also stressed that the liners will not protect against a nuclear blast.

“There are limits to what our products can do. Hard to believe, I know.”

Bolingbrook Mayor Mary Alexander-Basta denied knowing about WeatherTech’s proposed liners and said the village had no plans to buy any.

“If you would attend our board meetings, you’d know what the village was buying.”

Alexander-Basta then received a video chat request.  She accepted. A woman appeared on the screen. An anti-tank weapon was mounted on the wall behind her.

“This is Congresswoman Lauren Boebert,” she said. “My pronouns are big and gun.”

“Now they are. Anyway, tell (Former Mayor Roger Claar) that he’d better make Congressman Key Bump disappear, or I’ll tweet about Roger, and not in a good way.”

“Are you an overgrown ten-year-old?”

“I am the future of the Republican Party. In fact, if I’m reelected, I will be the representative leading the 24 impeachments of President Biden.”

“Yes. We’re going to have an impeachment a month, and I’m going to start the first one against the criminal in the White House!”

“Wait a minute. You have a criminal record, and what role did you play in the insurrection?”