From the Webmaster: While our staff is enjoying a socially distanced holiday week, I’m posting this article from 1991.  Don’t worry, we’ll be back next week with our Council of Psychics’ predictions for 2021. 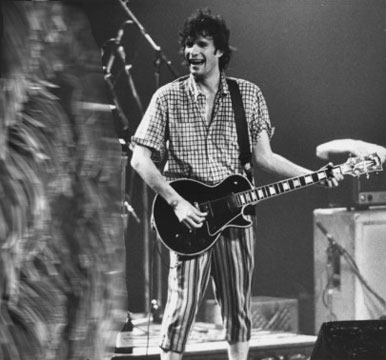 Paul Westerberg (Right), the lead singer of The Replacements, greets an alien fan (Left) on stage.

Controversial rock band The Replacements performed their final concert at Bolingbrook’s Clow UFO Base.  Despite their self-destructive tendencies, many in the audience said it was their best performance.

“It was amazing,” said Olsto Gustdo, an alien music critic from the Quad Stars Collective.  “They were sober and didn’t play any covers.  I can now regenerate knowing that I witnessed such a rare event!”

Blezod, also from the Quad Stars Collective, agreed: “(The Replacements) achieved peak alternativeness.  They were popular enough for me to hear, but not too popular that everyone knew who they were.  It is an undeniable fact that once a band becomes popular, they suck!  That is why I hope the Goo Goo Dolls never become popular.  Never heard of them?  They sound like the Replacements would if they were buried under coal and maple syrup then dumped into a cup filled with the blended remains of the New York Dolls!  Buy my zine because it’s cooler than H.E.L.P. Magazine!”

Sources inside the Department of Interstellar Affairs say Mayor Roger Claar arranged the concert to celebrate Rachel Rosenthal, the daughter of former mayor Edward Rosenthal, going off to college.  Some of the sources believe Claar wanted to make a gesture of goodwill towards his former rival.

“Roger needs to be on Ed’s good side,” said one source.  “He knows where all the bodies are buried.  Not real bodies, of course.  Anyway, Ed is the only person in Bolingbrook who could thwart Roger’s dream of being the longest-serving mayor of Bolingbrook. That’s why Roger has to make up for years of arguing with Ed when they both served on the village board.  It’s going to take more than a concert to fix their relationship.  I hear Ed is still upset over Roger complaining about the cost of replacing the wallpaper in the mayor’s bathroom.  Roger knew that Ed was just hiding the cost of the new missile defense system in that budget line item.”

Though the band officially broke up following their performance at this year’s Taste of Chicago, Claar had the Men in Blue bring the band’s members to Clow UFO Base.  He commanded them to do one last performance at Clow.

According to eyewitnesses, Claar said: “I don’t know the difference between The Replacements and The Ramones, but I know what I want.  I want you to give your best performance this weekend.  That crap you pulled at Heebie Jeebies? Unacceptable!”

As Claar lectured the band about why they should be impressed, Westerberg poured rum and coke into his mouth.  He then spat it at Claar.  Claar charged at Westerberg, and the room descended into mayhem.

“I’ve never seen this side of Roger,” said an eyewitness.  “If Roger jumped into a mosh pit, everyone else would be on the floor in seconds!”

When the Men in Blue restored order, Claar issued an ultimatum to the band:

“If you don’t give me your best performance this weekend, I will have the New World Order alter your brains so all of you can never get drunk or high ever again.  Each of you will spend the rest of your lives remembering that you squandered your chance at success!  You’ll remember sabotaging your Saturday Night Live performance.  You’ll feel guilty knowing that you stole that gig from a deserving band, and no drug or drink will cover up that guilt!”

“But,” protested Westerberg, “We’ll lose our alternative cred if we do what you say.”

Westerberg sighed.  “We’ll do our best, but we’re wearing women’s clothes and make-up!”

“Whatever!  Just give me a good concert so Ed will like me!”

After days of sober rehearsals, the Replacements finally performed in front of Claar, the Rosenthal family, and several thousand others.  The band started off their set with the song “Talent Show”, then proceeded to do solid performances through to the first encore.  The Rosenthal family and Claar seemed pleased.

However, the tone changed at the start of the band’s second encore:

“This song is dedicated to Mayor Rum and Coke,” said Westerberg.

The Replacements then performed “Waitress in the Sky.”  Claar flipped off the band from his skybox.

“Oh my god!” said the youngest Rosenthal daughter over the PA system. (Due to an agreement with the Rosenthal family, the Babbler will not print her name.)  “That’s so sexist!  You guys are just as bad as Guns N’ Roses.”

Westerberg started to say that his sister is a flight attendant, but Stinson then shouted unprintable remarks about Guns N’ Roses and the youngest Rosenthal.

Former Mayor Rosenthal stepped up to the microphone.  “Execute him,” he said.  The entire auditorium fell silent.

“Just kidding,” Rosenthal replied.  “I no longer control the Men in Blue.  But since you find the idea of working for Guns N’ Roses so appalling, I know people who can force you to join them.”

“Yeah,” added the youngest daughter.  “When Axl Rose is your boss, you’ll wish you were dead!”

The band ended the concert by performing “Anywhere’s Better Than Here.”  When the band left the stage, the Men in Blue erased each member’s memories of being at Clow UFO Base, then sent them back to Minneapolis.

Michael Lawler, an IT consultant for Clow UFO Base, loved the performance.  “Clow rocks!  Roger rocks!  I wish I could rock half as hard as Roger does!”

When reached for comment, Claar replied: “Replacements?  I wish the Babbler would replace you with a reporter who doesn’t call me at 2 AM!”

Rachel Rosenthal said she appreciated the effort Claar put into organizing the concert.  However, she said: “He could have saved himself a lot of trouble if he’d just booked Material Issue instead.  They’re a Chicagoland band, and they always put on a good show.”

‘World Wide Web’ could entangle Bolingbrook
Aliens beg Sen. Gore to focus on climate change instead of music lyrics
Mayor Claar promises the village will be debt-free by 2001
God to smite Bolingbrook on 8/7/91