I woke up a few days ago to tweets and feeds on social media that BiNet USA has declared it owns Bisexual Pride Flag and has sent out desist warnings to people and organisations not to use the colours without its approval. I thought, whoa, surely this must be a satirical joke but alas, it wasn’t. BiNet USA dug its grave; what a shameful thing to even think of! BiNet USA should have known the Bisexual flag is bigger than its greed and ego. Well they say Pride comes before a fall. BiNet cowardly deleted their twitter account after going on about owning and trademarking the Bisexual Flag and even threatening people and organisations with lawsuit. It’s a shame that someone with an ill thought out greedy idea has caused pain to many bisexuals who find comfort in the Bisexual flag identity. As a bisexual who is very much proud of the Bisexual pride flag, I say shame on you BiNet USA.

That said, I have seen a petition making the rounds demanding that the President of BiNet USA, Faith Cheltenham, be removed by its board. I certainly do not support going after an individual in this case and I don’t support this petition.

I loathe what BiNet USA did in regards to its appalling claims to Bisexual Pride flag, however, I hold BiNet USA as an Organisation responsible for the claim, the tweets and its fallout actions including targeting bi activists who used the flag on their websites.

It’s all well and good when some board members find it convenient to tender their resignation now but where were they when the decision was made? Did they first read about it on twitter? Would they have resigned if there was no public outcry?

This mess was created by BiNet USA and BiNet USA as an organisation should be held responsible. This issue should not be used as a means of settling personal grudges with the president of BiNet USA or any other board members. A more appropriate petition would have been a demand for BiNet USA to apologise for its action.

The President of BiNet USA on her Facebook page identifies as trans-femme Black Bisexual. and I cannot ignore the fact that racism could be a motivating factor in some of the comments I have been reading regarding this issue. There is so much hate and harassment towards Faith Cheltenham, most of it coming from the white bisexual community that it is truly concerning and the race aspect cannot be ignored.

The comments on some threads i have engaged in or stumbled on have been pure vile. Before you send another tweet, post another comment or go on her Facebook page to leave abusive, bullying and harassing comment or reviews, pause and ask yourself, is this really worth it. Remember, no one is taking away your bisexual Bi pride flag, neither Faith Cheltenham nor BiNet USA has the capacity to do it. So, pause, is it worth contributing to the distress of a black trans femme disabled bisexual when she is down? Why pile it on? Two wrongs do not make a right. Show care, show empathy, be angry but don’t be out to physically and emotionally crush someone who has contributed a lot to the visibility of Bisexuals. People can stumble, it is not an opportunity to trample on them. Think carefully about your motive before you send another abusive tweet, review or comment. Is your indignant self-righteousness really worth the physical, mental health of a member of our community, especially one who has dedicated their life to promoting our cause even if they have messed up now? Let’s correct people with care not with hate. Remember, there is a human being behind that screen, be considerate.

I certainly support that bad leadership should be called out. Some people are coming out with some unpleasant, abusive encounters they had with the BiNet USA president in their personal or official capacity many years ago, which is understandable, however, let’s not conflate issues or use this particular opportunity to exert a personal vendetta against an individual.

If the petition was about asking BiNet USA to explain itself and apologise, I’m more than happy to sign and share but I refuse to be party to what appears to be people using this opportunity to settle scores with a black woman they have, rightly or wrongly, issues with.

Some of these calling for her head have also speculated on her mental health with some saying it so derogatorily, which in and of itself is ableism. I don’t think we are in a position to speculate on the mental health of an individual. If this was even a possibility that is crossing peoples’ mind regarding Faith Cheltenham, is targeting her as an individual a responsible, decent action to take at this point?

If people have been abused by faith (and for the record, I do not know her, and I don’t ever recollect having any interaction with her), they should separate that issue from this particular Bi pride flag issue, otherwise it is just what it is, a personal vendetta.

Some claimed the reason they support the petition to remove Faith as BiNet USA President is because nothing can be done until she is gone. Really? Why must it be until after she is gone? A statement was issued in the name of BiNet USA Board of directors recently yet you insist it’s all about Faith Cheltenham. Sounds very much like personal targeting of an individual to me.

The only interest I have in BiNet USA is for the organisation to apologise for what happened. BiNet USA has a lot of explaining to do as to what led to that awful claim in the first place. It is not just enough for them to wake up tomorrow and say “Yes, we have removed Faith Cheltenham, can we now go back to being in your good books?”. Nope, they need to explain and apologise. It is totally their decision if they wish to remove their President, I will definitely not be signing or sharing a petition to that effect, that is the responsibility of the board of directors.

Also, for people who have reasons to bring complaints against BiNet USA President in her official capacity, they should very well do so, I simply maintain that this should not be conflated with the Bisexual Pride flag issue except in cases where it is specifically related to the flag issue. For example, demanding that a Bi activist who organised a Bi Virtual event remove the bi pride flag from their website, now this is related to this issue, not something done by Faith 3, 4, 5, 10 years ago.

Yes, BiNet USA has doubled down on its claim but it has not apologised, instead it came out with a statement by its Board of Directors that does little to clarify the situation. This is the more reason I think BiNet USA as a whole should be held responsible for this and not just its president, Faith Cheltenham, as this petition seeks to do.

Regardless of other people’s narration of their experiences with the President of BiNet USA in their personal capacity or official capacity, this particular issue is about what BiNet USA said about owning the copyright to Bi Pride Flag and these tweets and statements were made in the name of BiNet USA. If people have grudges with the BiNet USA President aside this particular BiNet USA ridiculous claim to Bi Pride Flag, this is a separate issue and should not be logged in with BiNet USA claim to the Bisexual Pride Flag. BiNet USA made an appalling claim, BiNet USA should not only speak out but apologise for the claim.

The world is not a great place for many right now, let’s spread love, not hate. 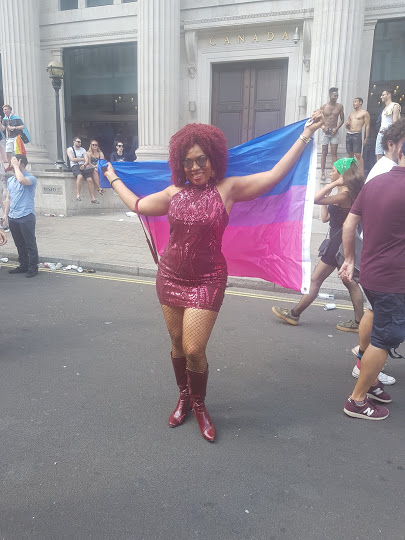 Your black colleagues are most probably not okay right now » « Trans Rights are Workers Rights too.