Serena Williams gave us another ‪‎Serenaslam. She is unarguably one of the greatest of all times. At 33, when most men and women champions are catching their retirement cheques, Serena Williams is saying ‘You aint seen anything yet!’ Serena Williams is at her best ever and she is here to stay. What an inspirational athlete! 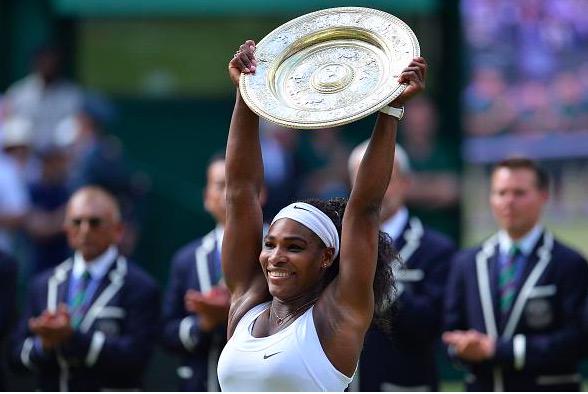 The Williams sisters not only changed the face of Tennis, they took it to a higher level. In a game where racism still unashamedly rears its ugly head, where sexism and beauty stereotypes mean the best athlete who happens to be black, gets less endorsement deals than the white blonde she has dominated for years, one cannot but admire the determination of the Williams sisters to excel in their game. Their many victories are inspirational and legendary.

We cannot ignore the racism the Williams sisters have faced over the years in a game that is predominantly white and traditionally elitist.

We cannot ignore the fact that Serena Williams gets so much hate because of her skin colour and does not fit the dainty, feminine stereotype of what a beautiful, female tennis player is supposed to look like.

We cannot pretend that her skin colour, physical appearance, and stereotypes of black women are not reasons white, blonde-haired women players who are ranked below her gets more endorsement deals than she does.

Serena Williams has over the years, dealt with an incredible amount of body shaming and racism. 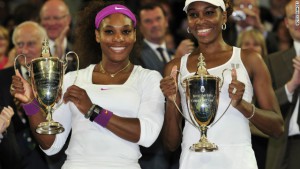 The Williams sisters had to endure a lot of racism climbing up the Tennis ladder. They played where their skin colour was demeaned. They endured the taunts and rose to the top of their game. Unfortunately, the racism persists to this day.

One must indeed admire the tenacity of this icon. White critics wrote her off and black men sexualised her in very offensive tones, yet she remains at the top of her game.

Serena Williams is a powerful, super talented woman, a world champion many times over.  Serena Williams is the queen of Tennis, a powerful force and a beauty to behold on and off court.  It is so appalling and ridiculous that racists, sexists, and brainwashed haters call her names like “ugly” and “tranny”, especially in regards to her physical appearance.

Some people come to her defence with the standard response, “Hate all you like but her big muscled forearms make her a lot of money”. This type of defensive response makes me uncomfortable.  Yes, her strong arms and undeniable talent make her a powerful force on the court, therefore making her a champion many times over. However, even if she does not make money from having big-muscled arms, this still should not be reason to body shame her. There are women in sports who are big muscled but who are not exactly raking in trophies and millions. Do they get to be ridiculed if attacked for their physical appearance since they can’t use the comeback “My big muscled body have made me millions”?

We must also condemn the unfair attribution that Serena Williams’ domination of Women’s Tennis is due to her physique. In Tennis, muscles do not automatically bring in the cash and trophies, techniques and mental brainpower count a lot. It is sad that white critics are quick to attribute her success to her ‘genetics’ rather than her own techniques, determination and commitment to the game.

No woman should be body shamed for not conforming to body stereotypes. We should be free to mould our body the way we want without fear of societal repercussions. My body, my choice.

In addition, there is the assumption that once we make money from our body, any type of body shame should not affect us. Of course it does. No one wants to be body shamed. Being body shamed is no fun for anyone, especially for us women who are expected to look and act a certain way, with serious consequences when we deviate from the script.

Serena Williams might be raking in the millions made possible by her super talents, horned techniques and very fit body, but this does not mean waking up to read all that body shaming stuff does not affect her. She is not an emotionless object to poke fun at to satisfy our patriarchal barbarity. She is a human being, with capacity to feel, love and get hurt.

In one of her interviews, she admitted that she avoids training with weights, opting instead to use resistance bands, because she does not want to overdevelop her arm muscles. Even though I am not a big muscled woman, I can identify with this.  When I mentioned to my family and friends that I would be doing regular workouts at the gym, I was immediately advised to avoid weights and dumbbells. I was told women with big muscles are not attractive. Therefore as a single woman, I should not make the mistake of lifting weights, which might make me build muscles (the horrors!).This seemingly harmless advice made me furious. At the same time, it points to just how brainwashed we women are about what is attractive and that what is attractive to men is what we should consider when dealing with our own bodies! This is highly frustrating. We need to change this mindset. We need to teach the younger generations to be more progressive, forward thinking, accepting and to reject stereotypes. 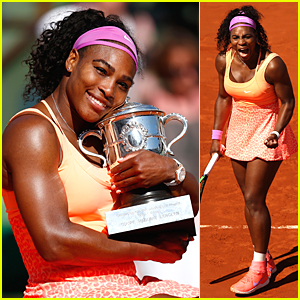 Serena Williams is an inspiration to many. Many big, curvy women are inspired by her mere presence on the world sport scene. She is a role model. I am not a sportsperson; however, I am a curvy woman who takes a lot of inspiration from seeing this curvaceous woman dominate women’s tennis. Whenever I watch her play, I get inspired and I get that extra energy to tackle my gym workouts with a big smile.  Sports, trophies, fame and fortune aside, she is one very beautiful, curvaceous woman with a banging body! Body shaming her does not make any sense.

Some fans are quick to use her beautiful appearance at the Wimbledon dinner to point out that she is not all that ‘bad’ in the looks department.  A facebook friend posted a picture of Serena Williams at the Wimbledon ball and captured it “What a transformation”.  I could not help but think, what was she supposed to be transforming from, beast to beauty? 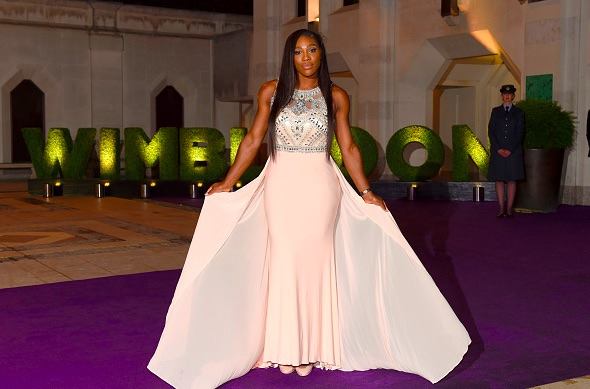 Why do we allow ourselves to believe the narrative that a strong, fit, muscled black sportswoman is not a beauty to behold when doing her thing on the field?

Why do we see such sportswomen as unattractive, beasts even?

Why do we rush to pour accolades on them when they appear in pink flowing gowns at dinner parties as if appearing in dresses and makeup redeems their credibility as feminine, sexy women?

Would we judge Serena Williams differently if she had appeared at the Wimbledon ball rocking a Tuxedo?

Sportswomen, as all women, should be allowed to dress any way they want, without this added pressure to prove their femininity at sports balls.

Calling her appearance ‘a transformation’ suggests that there was something wrong with how she looked on the field. Everyone should be able to explore and enjoy all facets of their physique without judgement and scrutiny.

Looking at the way and manner some men are quick to condemn Serena Williams’ physique, one would think they are afraid her muscles would emasculate them. To put her in ‘her place’, they go on a rant about how ‘ugly’ she is or how she looks like a “Tranny”.  Of course, this is a reflection and a dead give-away of how insecure they are in their own masculinity.

Talking about men feeling emasculated by Serena Williams’ physique, when Harry Potter series author, J.K Rowling, congratulated Serena Williams on her win in a tweet, a jerk responded that Serena was built like a man. 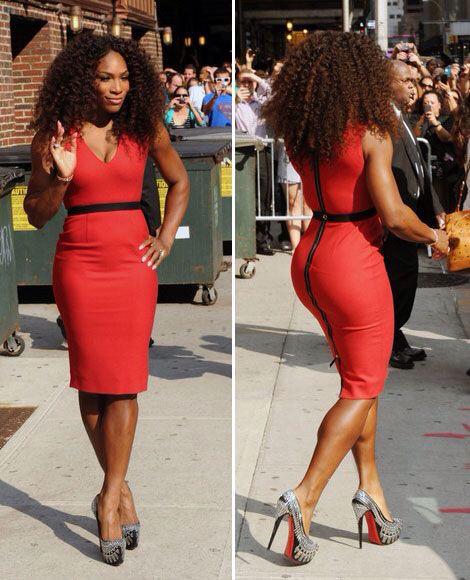 Although I wish J.K Rowling did not use the ableist term ‘idiot’ in her response, but she made it clear he was an asshole. J.K Rowling’s response has been retweeted more than 90,0000 times.  Of course, we must also remember that we live in a society where the value placed on a white woman’s endorsement of a black woman’s body is far more valuable and considered more important than what any other black woman has to say. Just as what a man thinks of a woman’s body is considered more important that what women think.  Indeed, we live in a skewed up society.

Talking about sexist scrutiny, I was at the gym watching Serena Williams majestically take down Maria Sharapova, when a random guy muttered to the guy beside me that Serena Williams and Maria Sharapova have a personal beef because they both went out with the same guy who also happened to be a Tennis player. He proceeded to turn his nose down and observed, “You know what these women are like”, in a tone that left no one in doubt as to what he thought those women are like. The glaring look I gave him dared him to mention the word ‘slut’. Are adults women not entitled to date within their professional circle without being condemned by sexist pigs? When the guy answered a phone call in Yoruba dialect, I was not surprised that he was from my part of the world, I was just sorry that people with his patriarchal, sexist mindset still exist to make life more difficult for women.

I look forward to many more of Serena Williams’ majestic performance on the court and sexy poses with trophies; she is a woman after my heart! Below are some of my favourites pictures of the queen of Tennis with her trophies.

Serena Williams at her 6 Wimbledon wins 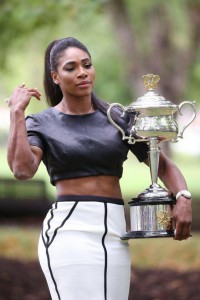 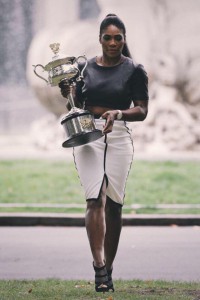 The queen of Tennis doing a hair flip with her historic trophy like da bomb and the boss she is! 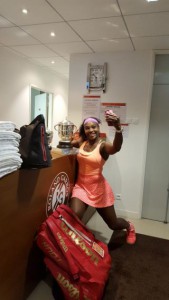 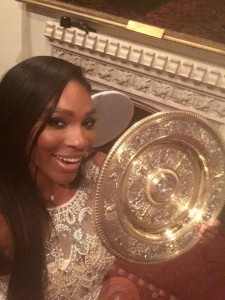 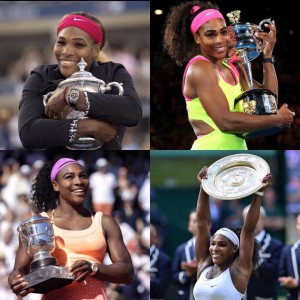 Serena Williams, the queen of Tennis, a powerful force and a beauty to behold on and off court. 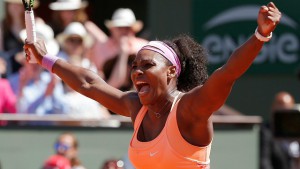 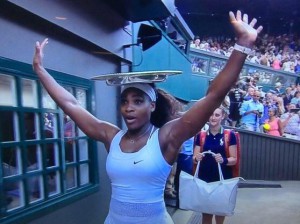 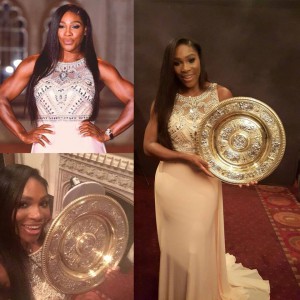 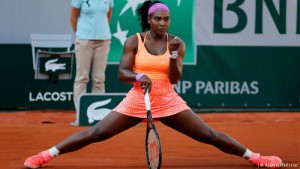 Serena Williams, congrats on making Tennis history. Thank you so much for the inspiration, passion, beauty, and the occasional human flaws too! Serena Williams, simply the best.

I Am Beautiful and I know It » « BeingFemaleInNigeria: The viral hashtag, the tweets and my take on it