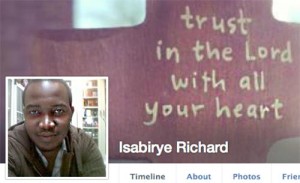 I and some concerned friends reported some of the posts to Facebook and in a quick action, FB removed his profile and barred him from using facebook to promote his hate and murder cravings. Kudos to Facebook.

I only wished it was that easy to sanction the other powerful, equally deranged homophobic African leaders and the majority of their followers who would gladly jail, maim and kill anyone suspected of being gay, lesbian, bisexual or Trans. No one in their right mind would think it is acceptable to criminalise non-harmful, consensual same sex relationships. No right thinking human being would support jailing or killing people for their sexual orientation.

Isabirya Richard definitely came across as deranged; he is no doubt a very vile and evil human being. Unfortunately, Isabirya Richard is not an isolated case. Many Africans today starting with many African leaders, are so filled with this deranged, vile and homophobic rage against gays, lesbians, bisexuals and Trans. They are happy to pass laws to jail, maim and kill gays, thereby legalising homophobia in the continent. 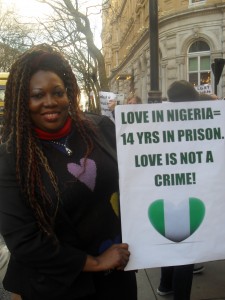 Shame on African leaders and their supporters who are determined to make Africa the home of homophobia. Africa was never synonymous with hate and intolerance, however neo-colonial Africa seems to have embraced hate as its motto, no thanks to its new found foreign religions. This hate-filled Africa is Not My Africa.

With its natural resources already plundered by those who claim to love it, the battle line is drawn for the soul of Africa. Pity, souls aren’t worth much but still it is good to see people like Isabirya Richard barred from a powerful social media like Facebook.

I can only hope I am spared the pain of seeing the rotten likes of President Goodluck Jonathan or President Museveni being wined and dined by world powers. Because in truth, their policies breed the likes of Isabirya Richard and they are no better than the deranged homophobe on facebook, if anything, they are worse and more dangerous. The decent thing to do would be to bar them from decent international gatherings and treat them with the contempt they deserve.

Another inglorious medal for religion as Boko Haram invades secondary school hostel, Kills 43 students in the name of Allah » « …Of Karma, Reincarnation and Destiny