righteous fury of West Africans, protesting the audacity of an international white celebrity chef, who dared to plagiarised (and badly so too), West Africa’s much beloved dish, Jollof Rice. To an outsider, this might seem like much ado about nothing, but hey jollof rice is not just any rice, it is a national treasure, a national signature, and as #Jollofgate fury has proved, it is an African pride. Touch our Jollof rice; we will come at you with united fury!

If you are still feeling lost as to what this is all about, here is a bit of back story as reported by BBC

Here’s how to think about Jollof rice: it means to West African nations what paella means to the Spanish, what fish and chips means to Brits or what burritos mean to Mexicans. The traditional dish is made with tomatoes and spices and it’s widely considered part of the heart and soul of the region. So when British celebrity chef Jamie Oliver published his own “interpretation” of the dish on his website, there was always the potential for controversy.

His recipe was posted in June and went largely unnoticed for months – until this week. The reaction from Africans began with dozens of comments posted on the chef’s website in the past week. The conversation then moved on to social media where it escalated. The Oliver recipe has attracted 4,500 comments, a large number of them seemingly from Africans – and many outraged at what they say are changes Oliver has made to the traditional recipe. In the past 24 hours Twitter joined the debate using hashtags like #jollofgate and #jollof.”

Here is a link to Jamie’s Olivier’s Jollof Rice recipe, thank goodness the writer at least referred to it as “Jamie’s twist on a Jollof rice recipe”. Nevertheless, as someone with a stake in Jollof Rice,  I don’t want the name Jollof Rice associated with what Jamie served on that plate!  As an enraged commenter posted:

Yes , it is that serious!

There are bloggers who have already done this Jollofgate’s fiasco justice, but my favourite of the jollofgate blogposts is this post, and below is an excerpt from the hilarious post.

“It was deep, guys. We almost called in Iyanla Vanzant to bully-yell everybody into tranquility. There was basically a Twitter village square meeting, and the Nigerians and Ghanaians were not having it. And for good reason. How can you gentrify Jollof rice to the extent that it starts looking like paella? Sacrilege! We can share our children (Hi Brangelina, Madonna, or whichever latest Hollywood star just ordered their very own collectible in the form of an African child), our animals (for your life-changing, perspective-moulding Safaris), and our head-ties that you re-fashion into “urban head wraps”, but we will not share our Jollof rice *bangs gavel*”

Wow, that had me ROTFLMAO!

I am definitely not a foodie, I am not even an enthusiastic cook, however I believe anything worth doing at all is worth doing well. Jamie Olivier simply murdered my beloved Jollof rice.

Even amongst Africans, there is rivalry as to who actually owns Jollof Rice and whose version of this beloved West African dish is the best. When I visited Senegal some 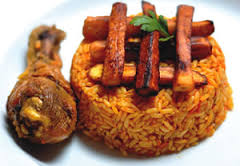 years ago, I was surprised when I was informed that Jollof rice originated from Wolof tribe of Senegal and that the dish derives its name from the word ‘Wolof’, which is also the language of the Wolof people. Jollof Rice is also known as Benachin meaning ‘one pot’. However, I must confess, when I was served what the Senegalese called Jollof rice, I was disappointed, but as a good guest, I kept my disappointment to myself. As far as I am concerned, wolof is wolof rice and jollof is jollof rice, they are two different dishes. I would never exchange my jollof rice for wolof rice! However, don’t tell the Senegalese that, they still believe Nigerians and Ghanaians corrupted their Wolof rice. Overall, it is a healthy rivalry. As a Nigerian who has tasted the Senegalese Jollof rice in Senegal, and the Ghanaian  Jollof rice in Ghana, I still maintain that Nigerian Jollof Rice is simply the best, with Ghanaian Jollof Rice coming a close second.

Anyway, as I said, I am not an enthusiastic cook and although Jollof rice is my favourite rice dish, I cannot cook jollof rice to save my life. I have several times to make jollof rice without success; it always comes out soggy, even my ordinary rice comes out soggy. The tasty jollof rice is a dish I have come to associate with sacredness because it is not easily available to me in London. It is a treat. Even while growing up in Nigeria, jollof rice was associated with parties and Christmas time. It is a delicacy one looks forward to eating at parties. Party jollof rice is the best there is.  Whenever there is a Nigerian party, I eagerly look forward to eating the Jollof rice. It is like an addiction.

If as a Nigerian, I cannot cook Jollof rice, why then am I angry that Jamie Olivier did not get it right? Jamie Olivier probably cooked it better than I ever could, but at least I am aware I cannot call what i cook, jollof rice, at best it is a concoction, which basically is a substandard version of Jollof rice. And, because I know the importance and significance of this cherished dish, I definitely won’t serve my version of Jollof rice to a guest. It would be an insult to the guest especially if they are Nigerians. I would be insulted if I was served Mr Jamie Olivier’s concoction in the name of Jollof rice. I would be like, “Are you taking the piss or what?”, and storm off in righteous indignation. Yeah, that is how much Jollof rice means to us Nigerian and Ghanaians. To us, Jollof rice has taken on a godlike status, so please don’t mess with our beloved jollof rice. What Jamie Olivier posted as Jollof Rice is an insult o, abeg.

Earlier this year, the food chain supermarket, Tesco, tried to market what looked like coloured rice and chicken as Jollof Rice. Africans in UK screamed blue murder and Tesco quickly apologised and withdrew the abomination it called Jollof rice. The thing is, anyone can come up with similar recipe with their own twist, you can name it whatever you want just do not ty to appropriate the name of a beloved national dish just to make profit. 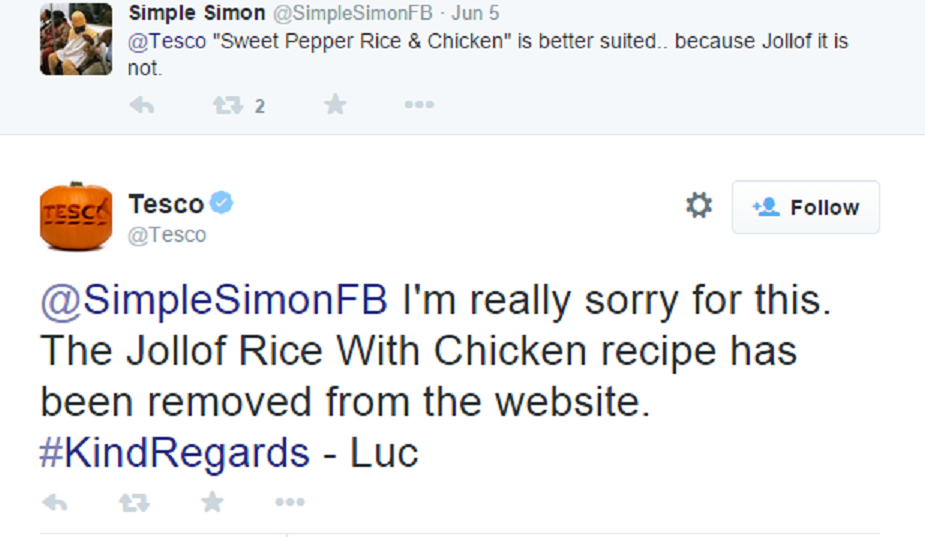 Some people have argued that by creating a recipe for the dish, Jamie Olivier brought the dish to limelight. However, this is a dubious claim and the quotes below from the BBC report sums up my feelings on this ‘exposure is good’ claim.

By creating this recipe Oliver has increased the exposure of the dish. Vera Kwakofi, from BBC Africa, says that’s part of the problem: “The danger is that in five years his version will become the official one.” The blogger behind Motley Musing agrees: “We have to ask ourselves who actually benefits from Jamie Oliver’s ‘appreciation’ of Jollof rice. This doesn’t necessarily translate into value for Africans. For so long, different African cultures have been appropriated without any direct benefit to Africans themselves, and people are particularly sensitive to this.”

Miley Cyrus can try to appropriate our twerking and we will just laugh it off but hey, Jollof rice is off limits! Foreign supermarkets or celebrity chefs like Jamie Olivier 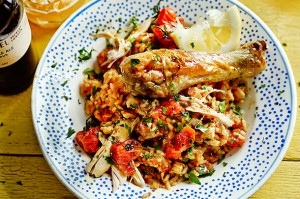 should not mess with our Jollof rice. If it is worth doing, at least do it well.  And Jamie Olivier certainly did not do it well.

I could not even find the jollof rice amidst all that garnishing. What was all that shredded chicken doing in a jollof rice? Who cooks jollof rice with whole tomatoes with the stem still on? And hey, that chicken piece looks malnourished. Abeg, if you must serve your guest chicken, let it be meaty, with flesh covering the bone, otherwise it would be considered an insult to your guest. Also, why on earth was lemon used to garnish the jollof rice? Abeg reserve the lemon for another national delicacy; roasted fish and plantain. Lemon has no place in a jollof rice dish!

I am very particular about my jollof rice. I would not order jollof rice from a fancy Nigerian restaurant in London because I don’t want them serving me some half-hearted, over glorified, over expensive concoction they are trying to pass off as jollof rice. As much as I crave jollof rice, I would rather wait to eat it in its authentic form than compromise. Unfortunately, I do not really move in circles 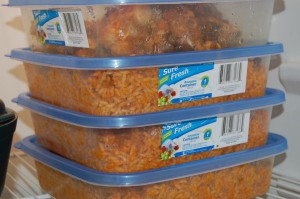 where I am likely to be invited to ‘owanmbe’ parties in London where authentic Nigerian jollof rice are served, but my mum on the other hand gets invited to such parties. Whenever she is off to one of these parties, I plead with her to bring me Jollof rice and i find myself travelling long distance to collect the party takeaway jollof rice. Therefore, i really understand the sometimes over-the-top indignation of my fellow Africans as expressed in these selected tweets and comments below.

It is in this spirit that I join my fellow aggrieved West Africans to inform Jamie Olivier to hands off our beloved Jollof rice. If it is not Jollof rice, it cannot be like Jollof rice. A counterfeit is never like the original. If it is not broken, don’t try to fix it.  Simples! 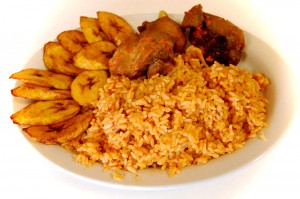 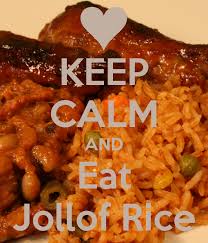 On the street harassment video: Calling out racism should not drown out the sexism in the video. » « Culture is not an excuse to perpetrate injustice; LGBT Rights are about Human Rights not Culture.