There is this unfortunate trend in social media where calling out someone for their sexist, misogynist, and/or inhumane remarks is seen more as an invitation for a fight rather than an opportunity to engage in rational discussion. Many, especially women, are discouraged from calling out sexist, misogynist, or stereotype remarks made by friends on social media like Facebook or Twitter, for fear of being tagged as the “type of feminist that gives feminism a bad name”.

There seems to be a renewed effort to tag outspoken,social justice conscious women as aggressive, judgemental, over-sensitive ‘bitches’ who just want to ruin everyone’s fun. It is particularly sad that this type of silencing technique is becoming even more prevalent in the Humanist/Atheist space.

November 17th-24th is  anti-bullying week and I pledged sometime ago not to be a bystander when I witness bullying. Of course, this has somehow earned me a reputation as the “fun ruiner”, especially amongst some of my fb friends.  Whenever i post or comment on such issues, it is at the risk of being referred to as the “type of feminist” they don’t like. Therefore, such discussions tend to irritate some ‘friends’ and many do get aggressively defensive when called out. However, i am sure that those who resort to aggressive behaviour when called out on how they treat others do not deserve the space they occupy on my virtual/real friendship list, simples.

I was shocked when I came across the status update below from a somehow close FB friend who identify as humanist and feminist: 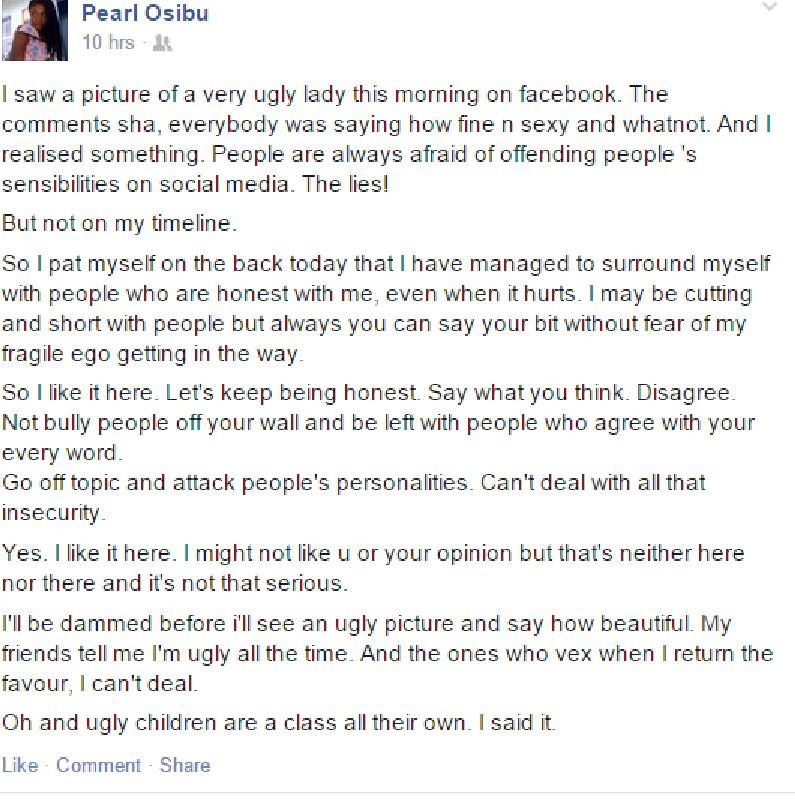 Since when is calling your fellow women ugly, a sign of honesty?

Since when is it OK to call children ugly?

One of her friends immediately posted a derogatory comment and picture of a random Asian woman she saw on a bus and tagged the pic #Ugly (I erased the facial identification of the woman in the picture to protect her identity). 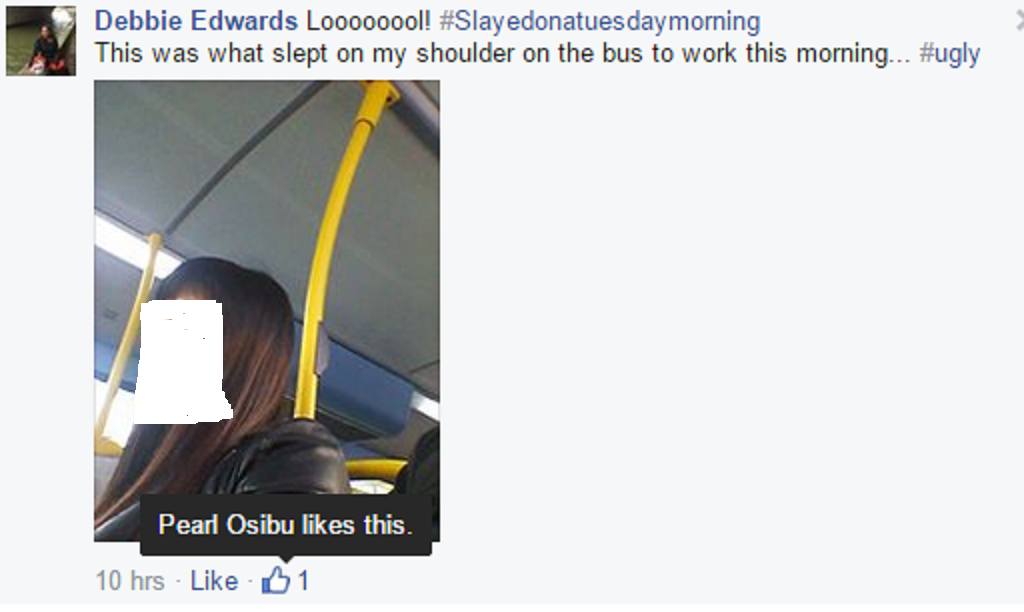 I was however glad when a few friends called her out: 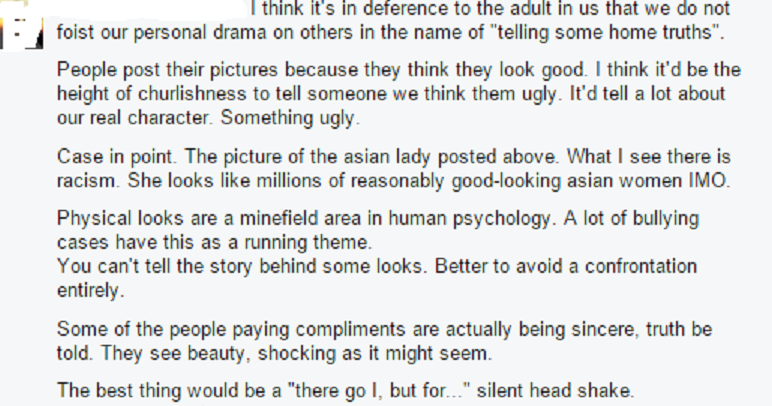 Unfortunately, she refused to see the wrong in her status update and instead, resorted to dismissing it as light-hearted humour and nothing to get angry about. BTW, “worwor” (which she used in her comments) is Nigerian slang for Ugly. 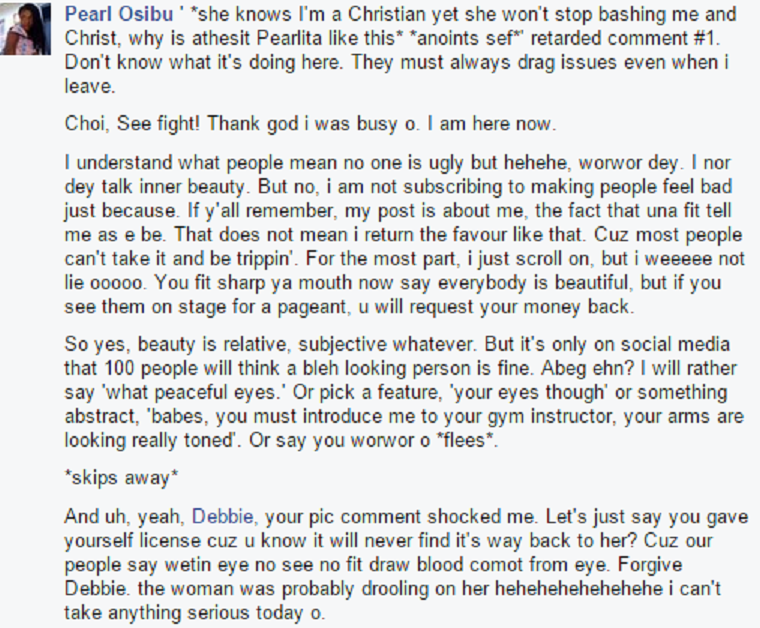 How does a self-identified feminist/humanist justify and treat so frivolously, the action of a friend who took the liberty to take the picture of a random woman on a bus, tagged it ugly and referred to a fellow human as a “what”?

I wanted to reach for the unfriend button, however I recognise that just unfriending her without calling her out, for fear of being tagged a “feminist fun ruiner” would mean the silence technique is working.

Calling people out, especially friends, is not fun, however if we truly want change, we owe it to ourselves as activists and social change advocates to speak out when we can.  Therefore, I posted the following comments on her post: 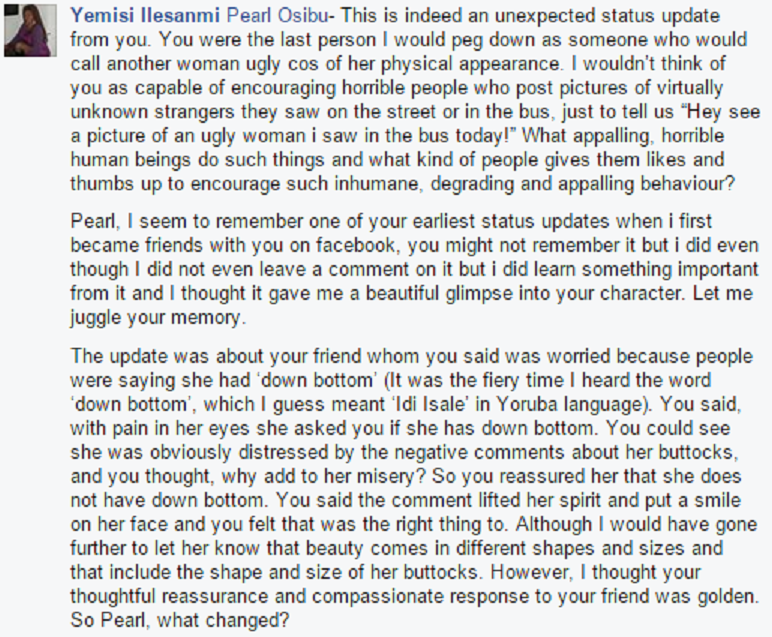 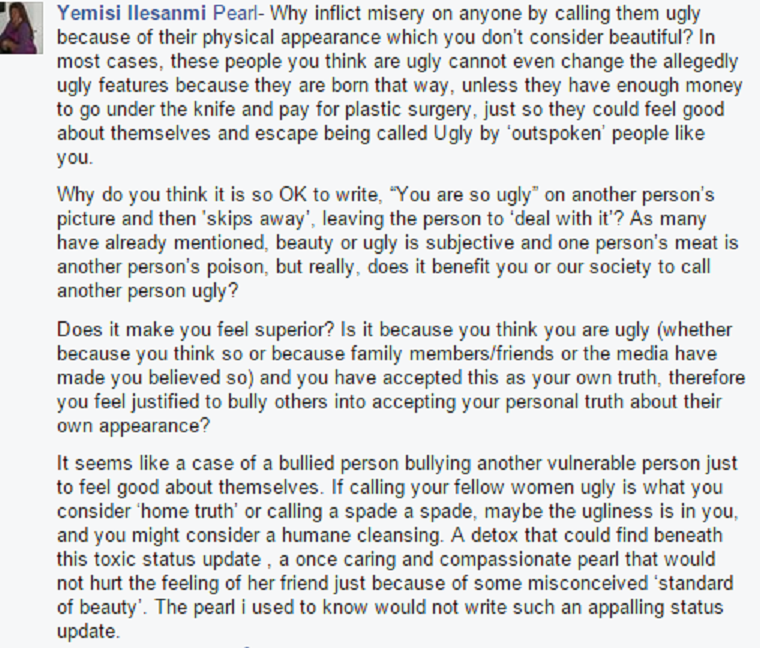 Sadly, she took the call out as an attack, and became defensive. 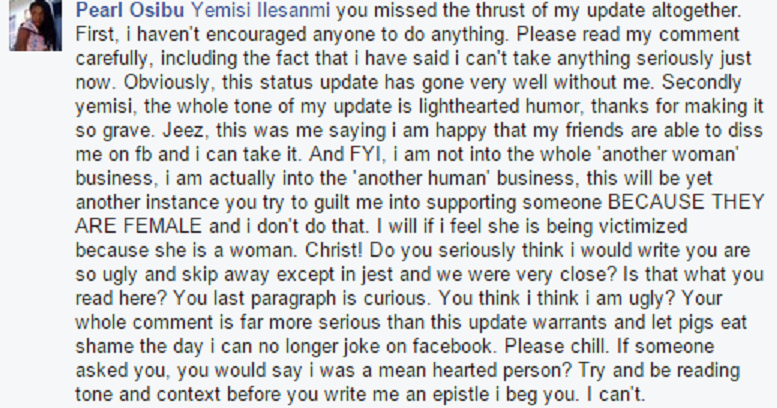 Notice the comment “I am not into the whole ‘another woman’ business, I am actually into the ‘another human business”. Really? It is so sad when they get it so wrong and are actually proud of it! 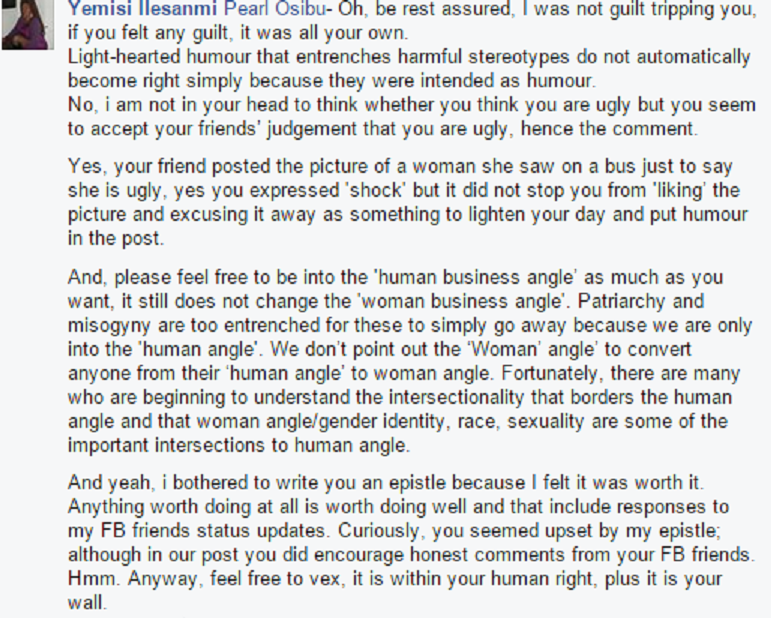 And in her frantic efforts to defend her actions, she resorted to telling lies, branded me as an angry, spiteful feminist and of course, fun ruiner.

In a response to another appalling commenter who was egging her on, she wrote:

and his yemisi person is exactly d atheist/feminist bisexual i cannot stand. Tufiakwa

I was labelled the kind of “atheist/feminist bisexual” they don’t like because I pointed out that calling a fellow woman/human ugly, calling children ugly and/or taking pictures of strangers without their consent and hashtagging it #ugly, are not things people who identify as humanist and/or feminist should engage in or encourage.

When will those who are outraged by our outrage at misogyny understand that calling them out is not an invitation for a fight? It is not an attack! 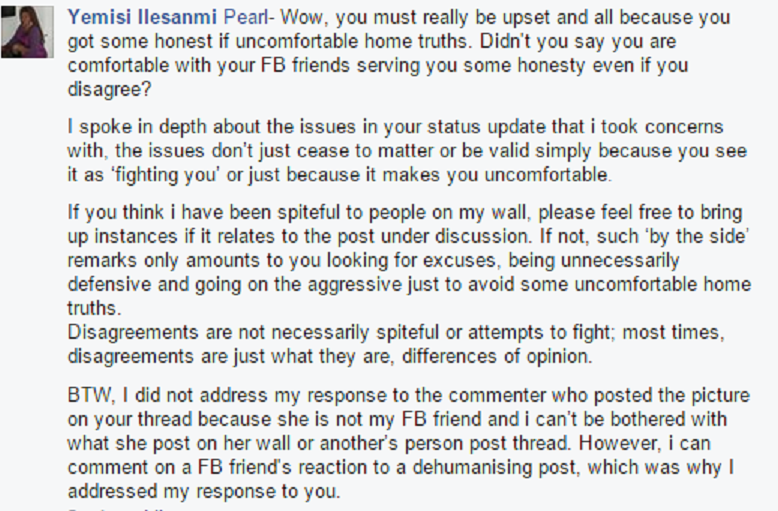 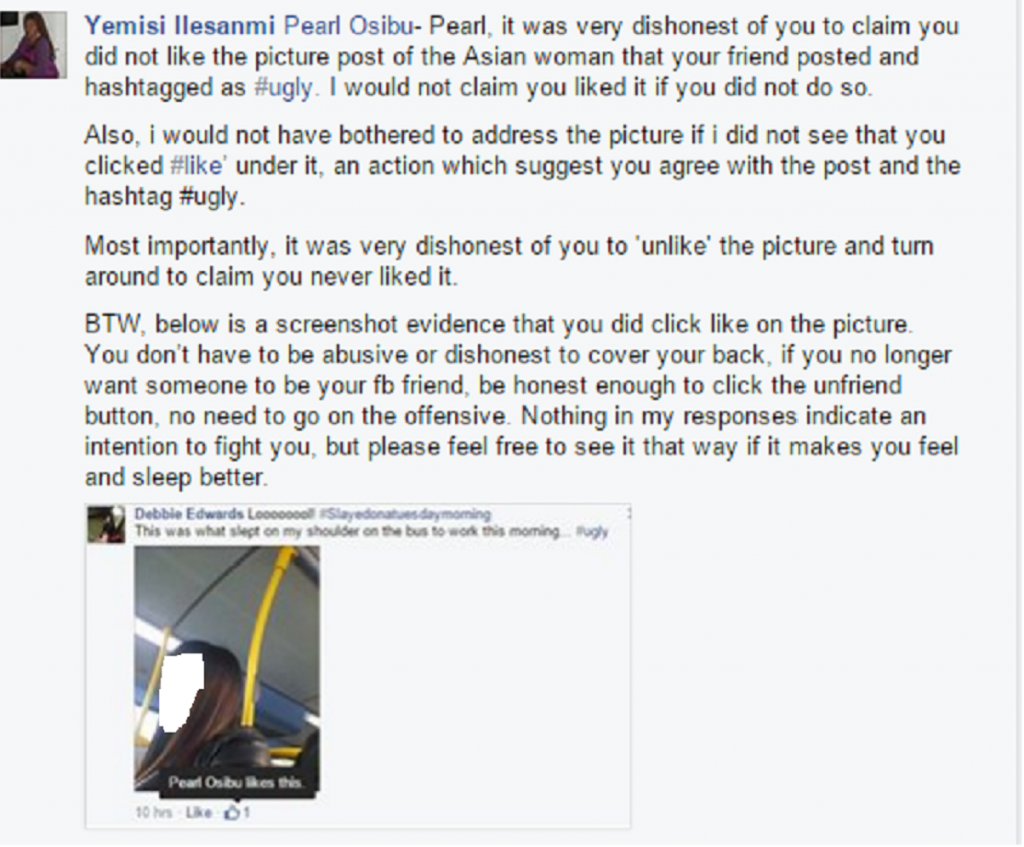 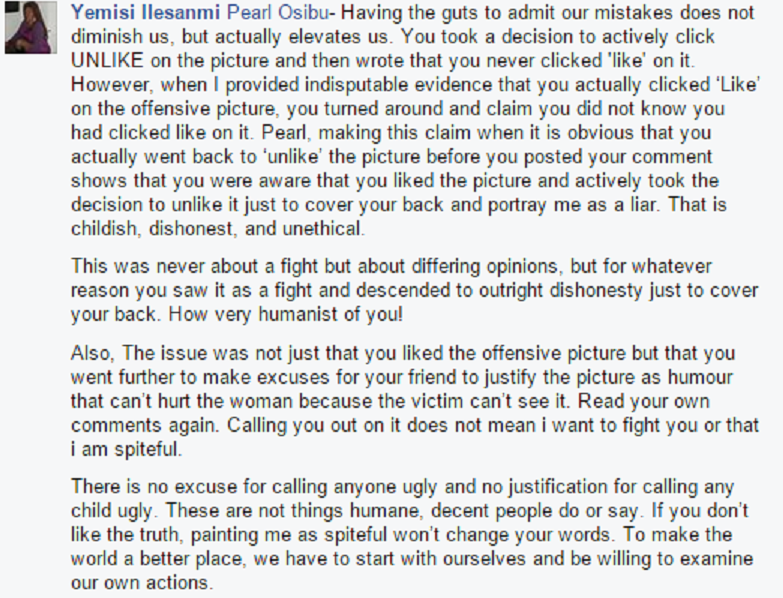 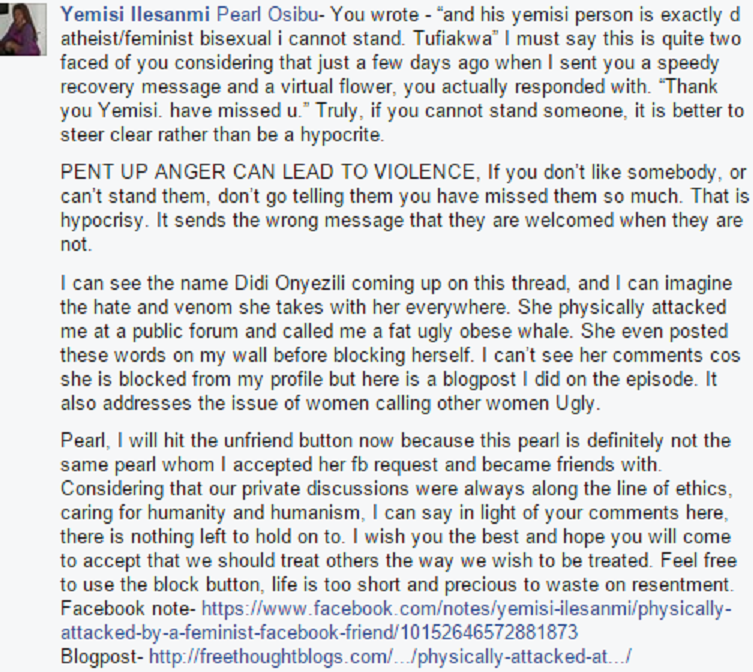 BTW, the Didi Onyezili mentioned in the comment above was the same person who physically attacked me at an atheist event, which i posted about here.

And might I add…while Pearl is a sweetheart, who speaks her mind. This Yemisi person is vicious and nasty. Now THAT I find very #ugly.

Ok people it was a joke…of courae I dont find this lady ugly. I wasn’t gong to justify myself because I don’t need to…to you lot…but now you’re giving Pearl all this greif. Stop being bullies, LEAVE HER ALONE she did nothing wrong. My bad.. ..It’s her wall. Give your egos a rest. Please. I’m pulling it down ONLY because it has been so misunderstood. Not because some strangers have misjudged my sense of humour. Uptight people just do me in. #peace

Oh dear Flying Spaghetti Monster, suddenly I am the vicious, nasty bully? And this coming from the same person who posted these atrocities: 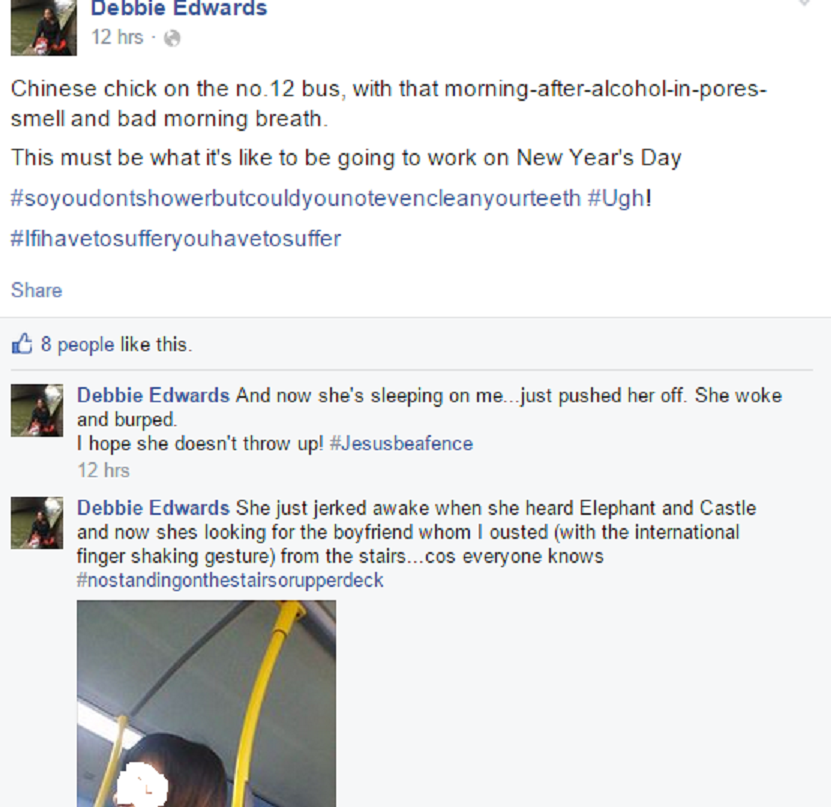 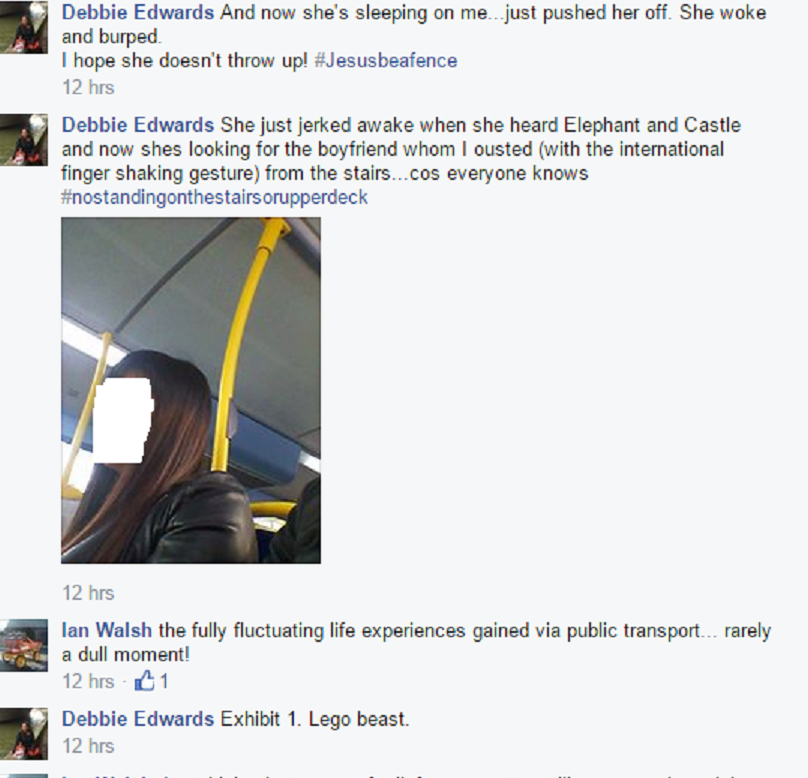 This is a truly disgusting, appalling, and dehumanising commentary. It is certainly not something decent human beings should justify or trivialise as a joke!

I immediately left the post-thread, and proceeded to unfriend my humanist friend as the conversation was turning toxic. I was  however, informed that immediately after i left, she posted a particularly nasty comment about me, which she later deleted because according to her, her “humanist oga “called and advised that she delete the comment. I wondered what nasty thing she could have written that necessitated her “humanist oga” from the Nigerian humanist community ( I assume) to call and advice that she deletes it. BTW, “Oga” is Nigerian slang for ‘boss’. BTW, I have no idea who her humanist oga/boss is.

Unfortunately, she refused to be remorseful about her unfeminist, ‘unhumanist’/ inhumane status update, but  chose instead to be aggressively defensive.  If only those people understand that labelling me as the type of feminists they don’t like is not an insult, it is an indication of the kind of person they are.

Somehow, i can’t help but put part of the blame on the likes of Richard Dawkins for setting bad examples for impressionable young Atheists/Humanists when it comes 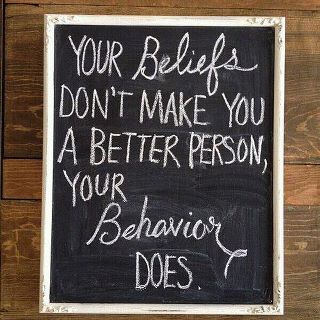 to Social justice issues. My now former FB friend recently met her atheist hero, Richard Dawkins, at the just concluded Humanist convention in Oxford UK, which she attended as one of the reps from the Nigerian humanist community. This coincided with the time Richard Dawkins was in the spotlight for his rape apology remarks (Isn’t he always in the spotlight for the wrong reasons these days?)

During that period, she  had nothing but praise worship for Richard Dawkins. However, she took it a step further to state that despite the negative things people are saying about him, he remains her idol. She probably was not happy that ‘feminists’ like me are calling out her atheist idol. Maybe her adoration and hero worship of Pope Richard Dawkins contributed to polluting her mind against “feminists/atheists” like me, She actually came across to me as a better person when she was still coming to grips with her new found non-belief. Unfortunately, the likes of Richard Dawkins whom she looks up to, have not been good role models in terms of nurturing empathy or social justice.

I am no longer surprised when some people who identify as atheists make misogynist, sexist, racist and even homophobic remarks, afterall Pope Richard Dawkins is fast becoming famous for his lack of understanding of social justice issues, blind privilege and his inability to properly apologise when called out.

Atheism is about non-belief in God, which is why in order to reduce my interaction with assholes who also happen to be atheists, I seek out atheist spaces that are interested in Social justice issues.

However, if you identify as a humanist, get sponsorship from humanists organisations to attend humanists’ conventions, make a lot of noise about your humanism on social media, then you should know that there are rules, regulations, and values that define humanism. You have to respect those rules or stop calling yourself a humanist. Demeaning another human being is not a value of humanism. If you are going to call out religious believers, be ready to be called out on your humanism too.

This is anti-bullying week; let’s remember that a call out is not an invitation for a fight, or a reason to get defensive.

We should be cognisance of the silencing technique and not let it wear us down or deter us from standing up for what is right. Even if the world turns its back on you, do not be silenced!

Let us speak out against all forms of discrimination and dehumanising behaviours. HEAR IT. STOP IT. #NOBYSTANDERS.

Physically attacked at an atheist event by a fellow ‘feminist’ atheist!

Bullies Are Not Born; They Are Made. » « On the street harassment video: Calling out racism should not drown out the sexism in the video.