I had of course notified the organisers that I was coming. I arrived at the venue at the same time with a white woman who was also attending the program for the first time. One of the orgainsers came to get the door to usher us in. I must say, that was the point my bubble began to burst. She was all over the other woman, asking about her journey and all, while all I got was a cursory, suspicious “hello” that got me wondering, “Have I done something wrong?”

When attention was finally directed at me, the question was focused on how I got the information about the event. It seems my answer of “Through a friend” was not good enough; I was prodded to give the name of the friend. I was told that the reason she asked was that some people think the Bi activist weekend was a pick up /dating weekend. The alarm bells started ringing because it seems I had to prove I wasn’t there to pick up dates but for real activism, while the other woman didn’t have to go through that cold reception.  I put that down to the colour of my skin.

One step into the meeting room, I realized immediately I was the only black person in the group. The other black identified person was a facilitator of the Race workshop, she was Bi-racial and identifies as Irish/African.

I must say as a trainer, facilitator, and activist; I enjoyed the workshops as I had a lot to contribute to the discussio

ns and learned new things. At the end of the workshop, we were asked if there was any instance any of us felt isolated in the group because of our race, everyone said NO except me. Needless to say, mouths were aghast and all eyes upon me piercingly screaming, “What the heck do you mean you felt isolated?”

Anyway, I took the opportunity to explain to the group that when one enters a room for a large group meeting and suddenly realised that one is the only black African in that room, there is a tendency to feel a sense of isolation. They probably did not notice I was the only black person in that room, but that wouldn’t stop me noticing this important fact. I know I am not the only black bisexual in UK and when attending a weekend meeting with an established bi activist’s coalition group in UK, I would expect to see a bit of diversity. Therefore, it came as a shock to me that I couldn’t find another of my skin colour at the event. The fact that they did not even notice the absence of that diversity was worrisome but when some of them put it down to being ‘Colour Blind’, it is irking to say the least.

I did have a good weekend at the event and when I couldn’t get a room at the hotels the other participants suggested (since they were sure that there were available rooms in their hotels, probably my heavy ‘African’ accent puts off the hotel managers?), a pleasant couple offered to accommodate me for the night.

Unfortunately, I have not been able to attend subsequent meetings mainly due to financial constraints as they do involve travels and hotel bookings. However, I do also note that as an organiser, if I had a minority attend my program for the first time, I would make an extra effort to reach out to the minority to get feedback and encourage them to attend subsequent programs. This is a way of building diversity. In this case, the organisers did not do this.

I also think many bisexuals in England find it more convenient to identify as lesbians or gays. Lesbians and gays are words that many outside the LGBT community are already familiar with, and with this, come legally recognized rights. Bisexuality on the other hand often needs to be explained to people and it does not come with easily recognized rights. For example, I have seen cases of bisexual asylum seekers told to identify as lesbians by their lawyers because it is less cumbersome to win a case as a gay or lesbian identified than as a bisexual. This unfortunately also promotes invisibility of bisexual cases in the judicial system.

One contrast I have noticed between UK and Nigeria where I come from is the number of people within the lgbt community who willingly identifies as gays and lesbians. In Nigeria, because of the oppressive laws surrounding same-sex relationships and the sodomy law inherited from Britain during colonization, the words Lesbian and Gays are known taboo words. Bisexual on the other hand is not even a known term to people outside the LGBT community.

In Nigerian LGBT community, it is normal to find a self-identified lesbian or gay in a relationship with the opposite sex, they claim it is a cover-up strategy to dispel any rumour about their sexual orientation. Because of this ambiguous lifestyle, it is sometimes difficult to know who is really gay, lesbian, or bisexual.

In addition, in the UK, I have noticed that in contrast to the ugly situation in Nigeria where members of the LGBT community have to operate underground and hide their sexual orientation, this is not much of a problem in the LGBT community in UK. They have rights and can freely identify has LGB or T. Many have chosen to identify with the L and G because they are more recognized and protected by the law. Some who would fall into the bisexual identity would rather identify as lesbians or gays because the LG words are more powerful and inclusive than the B word.

It is unfortunate that bisexuals suffer such invisibility within the LGBT community but it is also shameful that the few bisexual groups trying to gain visibility have not really reached out to Bisexual people of colour in their community.

I would prefer to be part of all an-inclusive group. When I hang out with my LG activist friends, it is often inclusive in terms of race but not inclusive in terms of Bisexual representation. On the contrary, when I hang out with bisexual groups, the non-representation of people of colour is one glaring gap that bugs me. It is sad when one is part of an invisible minority but it is 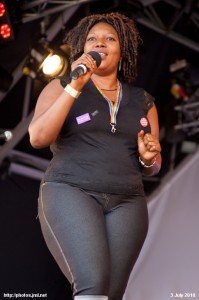 This issue of people of colour within a minority is also one that rears its ugly head in some other groups I identify with, for example the Atheists community. Atheists are a minority in many countries and white people dominate atheism as a movement. It seems almost a myth that we have intellectual black atheists.

However, there is a growing call in the atheist movement for better representation and visibility of Atheists people of colour. While I appreciate this call, one thing that continuously bugs me is that people of colour who are part of a minority group never are contacted unless the group wants to do a feature on people of colour or to promote a PR stunt about its diversity policy.

It seems the only time an activist of colour is contacted to write or speak about a topic in their group event is when the theme is on race or focused on their colour and diversity.  People of colour hardly ever are contacted to talk about the main reason they are part of that movement without having to tie it to their race. I mean, I would be very comfortable speaking on topics on bisexuality or atheism but the very few times I have been contacted to do this, it has been to ask me about my perspective as a person of colour within this movement. This sometimes makes one feel that many people think the only thing people of colour are capable of bringing to a movement is their skin colour to boosts the movement’s claim to diversity.

I do hope bisexual groups, atheist groups and other progressive groups start appreciating diversity and appreciate the contribution each individual brings to the group aside skin colour.

THEY SAY IT IS CULTURE, I SAY IT IS TORTURE! » « Let’s talk about Bisexuality and Biphobia