I am sad but not so shocked by the savagery and pure barbarism displayed by the two murderers who butchered a man to his death in broad daylight in Woolwich, South East London. The victim, a serving soldier was attacked with knives and a meat cleaver by two men shouting Allahu Akbar (God is Great).

I am also very sad because this really did not shock me as much as I would have expected. In fact the only shock seems to be the weapon they chose. Meat cleavers and machetes aren’t normally associated with terrorists in UK; bomb seems to be more of a weapon of choice than machetes.  Or could the weapon of choice have something to do with the Nationality of one of the attackers?

One of the two men who committed the dastardly act, Michael Adebolajo, is said to have a Nigerian background. I must say, as a Nigerian, it is not uncommon for aggressive people in an attempt to strike fear in their opponents, to boast th 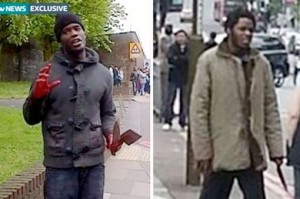 at they will bring out a machete to butcher their enemies. However, I only see this on ill advised Nollywood movies, but even in the movies, while menacingly brandishing their machetes, they never butcher anyone. I do see Americans rush to bring out their guns and revolvers at the approach of an intruder, but then I am told that is not just a Hollywood tale, it is reality.

The murder is a reminder of the stark insanity that is Religion.

According to BBC sources, Michael Adebolajo, a Briton of Nigerian descent, comes from a devout Christian family but took up Islam after leaving college in 2001. He was described as “bright and witty” when he was at college.

This British born Nigerian was shown with a bloodied knife which he had used to butcher his victim. The two murderers made no attempt to flee; in fact they were happy to be filmed, they even asked people to take pictures of them in anticipation of being the latest YouTube sensation.

In a thick British accent, the murderers made a series of political statements

We swear by Almighty Allah, we will never stop fighting you until you leave us alone. The only reasons we killed this man is because Muslims are dying daily. This British soldier is an eye for an eye, a tooth for a tooth.

You will never be safe. Remove your government. They don’t care about you.

I apologize that women had to witness this but in our land women have to see the same.

I was perplexed as to how a Nigerian would claim British soldiers are killing Muslims and women in his land but then it dawned on me that he was not talking about Nigeria, He was referring to Afghanistan, Iraq and other war torn Islamic countries. To this British born man of Nigerian origin, his land was not Nigeria; his homeland is the Muslims headquarters of the world. His adopted religion has totally erased his nationality, his identity and his history. Religion has taken firm hold in his deluded, sick brain. 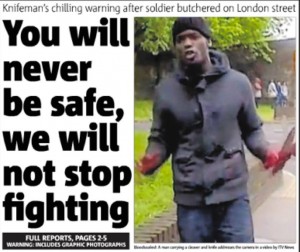 I make it a point of duty to avoid anyone who stands on the street screaming the gospel of their skydaddy. If you can stand on the street, constitute a nuisance in the bus or even in a bank as I once witnessed here in UK, to preach about your skydaddy and its hellfire, I think you are a religious fanatic and a potential terrorist. Yes, I walk far way from such people.

It also leaves me so sad because most of the times, those street preachers screaming the praises of foreign Skydaddies, are blacks. I think it is deluded to believe in any Skydaddy and imaginary beings whatever your colour, but it takes an extra dose of delusion and stupidity for a black person to extol the praise of a skydaddy who condones the slavery of his ancestors and also preach from a book that consider his race inferior. I will never understand why women hold dear a book that clearly states they should be submissive to the other sex, or why LGBTs would attend a religious service where they are told that for their sexual orientation, they will burn in hell like the people of Sodom and Gomorrah. Yes, it all perplexes me, but the stupidity of an African man brandishing a bible or a Quran is indeed beyond comprehension.

One light consolation (if it’s any) was the moment the barbaric man was shot and taken down by a police woman,  just after he said

‘I apologise that women have had to witness this today, but in our land our women have to see the same.”

So much for his fight to shield women from horrors!

I must add that watching the footage, there was no real cause for the police to shoot, the men were no longer aggressive and were actually calmly waiting to be whisked off by the police in their hour of national publicity, I think there is already an ongoing inquiry into the appropriate or inappropriate shootings of the suspects.

I must add that if this had been Nigeria, the true meaning of “an eye for an eye” that those sadistic, deluded men were preaching would have been served to them in the mode of jungle justice. They would have had their foolish necks adorned with car tyres and set ablaze in an instance! No, I am not a fan of jungle justice, I totally condemn it, just saying they probably wouldn’t have the luxury of being whisked off in a police car.

Anyway, I wonder why the Nigerian High Commissioner has not said anything about this pathetic scum’s tie to Nigeria.

Muslims are busy disowning the man. The Muslim Council of Britain said the murder was “a truly barbaric act that has no basis in Islam and we condemn this unreservedly”. Ermm… actually there are many verses that could support such killings in the quran as well as in the bible.

Britain is quick to add that the man is a Nigerian even though he is British born.

Nigerians at home are quick to say, “Britons,  na una property, the man is not ours , he was born, bread, buttered and spoilt in Britain, he is your property.

Nigerians in UK are also saying if he had won an Olympic medal, they won’t put Nigerian in front of his British identity.

Well, success has many families but failure is an orphan no one wants to claim. But where is Nigerian High Commissioner, probably on leave, as always! Since this is being classified as a terrorist act, at least let Nigerian diplomats  make it clear that this scum has never set foot on Nigerian soil as some sources have claimed.

As a Nigerian resident in UK, and an Atheist, I could disassociate myself from this man and his atrocity but can I disassociate from him as a Human being? Unfortunately we all share something in common with him; we are human beings.  I feel sad that I have anything in common with his likes; animals should be right to look at his bloodied hands and look at humans with disdain.

One other thing that is at the back of my mind is the constant use of the words “barbaric” and “savage” by the media to describe this undoubtedly barbaric attack, but then why don’t we ever use barbaric and savage to describe the sophisticated bombs and drones that tear limbs of innocent children apart?

It seems so convenient for us to describe this as barbaric but the media hardly use “savage” and “barbaric” to describe the Boston bombers even though human fleshes were blown everywhere as a consequent of their savage acts.

“you all must die”

as he sprayed youngsters with bullets and shot dead at least 85 people at a youth camp was mostly described as a “Right wing extremist:” in the media.  Barbaric or savage was hardly used to describe the murderer who could have passed 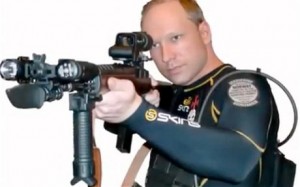 as a Calvin Klein model. Was his action less barbaric or less savage?

Are the adjectives we use to describe actions also tied to skin tones, looks and weapons of choice?

Are not all cold blooded murders savage and barbaric?

Are we just condemning the dastardly action or do the chosen adjectives have underlying, subconscious racial, political  and stereotype tones?  I guess that is something more to ruminate over.

I commiserate with the family of the victim; this must indeed be a trying period for them. I am glad that at least two savages are off our streets, hopefully locked behind bars for life.

The cancer called Religion! » « Accents and the Tragedy of Self-Hate