EDITED (16/03/2016)- Latest reports coming in are pointing to the fact that the pictures accompanying this story, which were taken from comments left on the alleged victim’s Facebook wall and news-reports, are not that of the alleged victim. Investigations are ongoing to authenticate the story.

For some time now, for the sake of my mental health, I have shied away from reporting any news or write about anything from my home country, Nigeria. There is only so much sadness I can handle and that country has left me heartbroken one time too many. However, when I saw this horrible news of tragic homophobia on my timeline, I knew I had to say something about this. If anything could jolt me out of my silence on Nigeria and its nefarious issues, it is certainly another tragic homophobia, biphobia and transphobia case.

From news filtering in, the victim, Akinnifesi Olumide Olubunmi, was accused of homosexual activities, he was beaten up by youths in the community on 17th February 2016 and later died on 18th February 2016 from the injuries sustained.

This very appalling but important news did not make the rounds until a Facebook user, Ogbeni Ade Omo Ade, (who sounds like he participated in the homophobic/biphobic attack), wrote on the victim’s Facebook wall-

“End of a gay! This will serve as a lesson to all the people that loves engaging in bisexual, homosexual, lesbianism and gay.

Akinnifesi was a guy that everybody in the community thought was a responsible person not until his secret was revealed when he was caught hands down with honourable Dotun who was a serving supervisory councillor in Ondo west local government in Ondo state he was beating mercilessly by Ondo youths that saw everything bad in a man dating a man he was rushed to the hospital but he later died of internal bleeding due to the mob beating the honourable has commited a lot of atrocities by engaging in bisexual activities he is still on the run although his properties has being destroyed his house and family’s house has being burned down this should serve as a great lesson to all youths!” 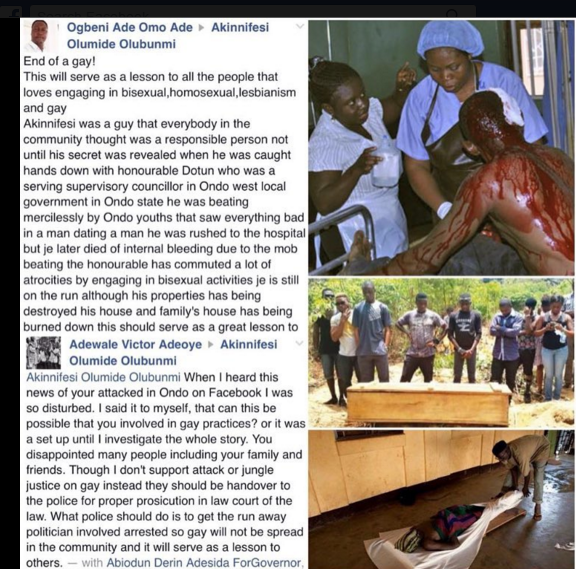 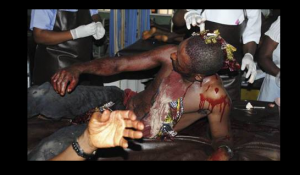 The celebration of such lynching is nothing short of barbaric.

This horrible man was happy to celebrate the death of an innocent man all because of his alleged sexual orientation. From his post, he would happily participate in the lynching of the other man who is allegedly on the run, even though his home has already been burnt to the ground and his wife and children’s lives already at stake.  Unfortunately, from comments on the victim’s Facebook wall, this reprehensible human being is not alone in his homophobic thirst for innocent blood of sexual minorities.

I saw this on your time line that you are attacked and later died as a result of the injuries sustained in the on 17th January 2016. I don’t know that you are involving in LGBT activities in the community until you were exposed or captured by the youths when you are about to lure a young man into gay practices some where in Ondo. when next you come to this world again you will not practice this unholy things again. 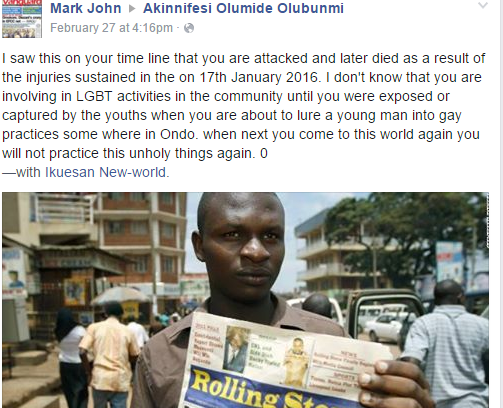 “Akinnifesi Olumide Olubunmi When I heard this news of your attacked in Ondo on Facebook I was so disturbed. I said it to myself, that can this be possible that you involved in gay practices? or it was a set up until I investigate the whole story. You disappointed many people including your family and friends. Though I don’t support attack or jungle justice on gay instead they should be handover to the police for proper prosicution in law court of the law. What police should do is to get the run away politician involved arrested so gay will not be spread in the community and it will serve as a lesson to others.” 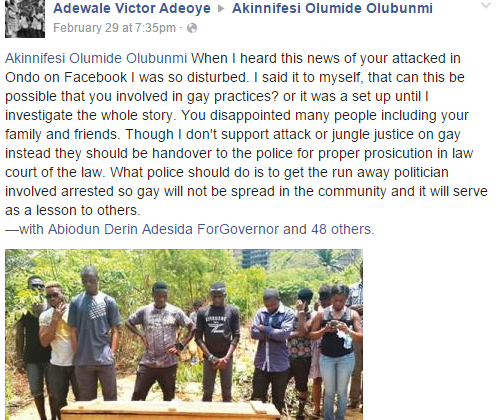 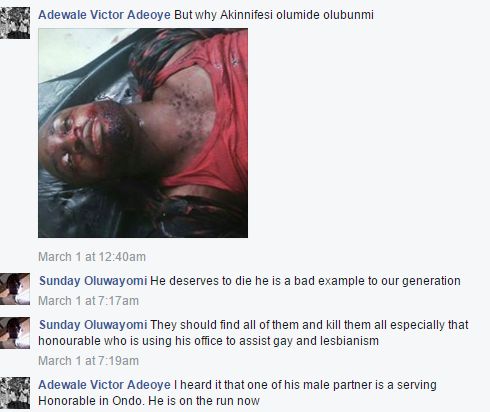 This morning, as i logged into Facebook…I saw many posts of people raining courses, posting hate speech and others to one Mr Ogbeni Ade Omo Ade who said the homosexual deserves death and posted some pictures of a victim by name @Akinnifest Olumide Olubunmi who was caught in the act and was beaten by angry youths/mob and he died the following morning. Hmmm so sad, so bad, sad news!! If you can’t create, why kill? I SAY NO TO THE BRUTAL MURDER OF THIS YOUNG MAN…..But whoever supports the existence or practices of gay and lesbianism here in Africa is dead to me. This Young Man Is Dead and Gone Forever and someone posted yesterday that we should leave them alone, its their life.. I SAY NO!! HELL TO THE NO!! If you know anyone still in the act, don’t keep quiet, this is Africa. It is morally wrong, Religiously unaccepted and to the laws of nature, IT IS EVIL.. Even the constitution is against it. Why keep quiet if you claim you love him or her and you started ranting when he is caught in the act and murdered cold blood?

To The Diseased, R.I.P, to the “deaf” R.I.P and to the supporters R.I.P cos that is the only debt i owe you. ‪#‎MyStand 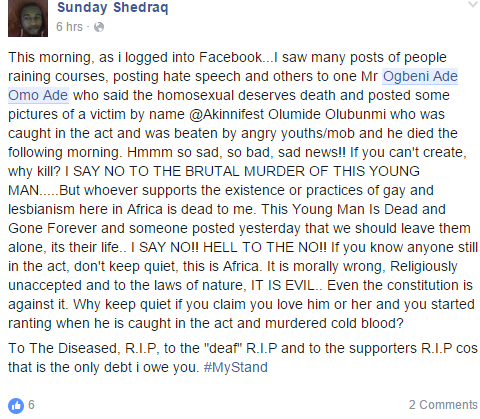 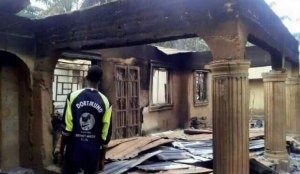 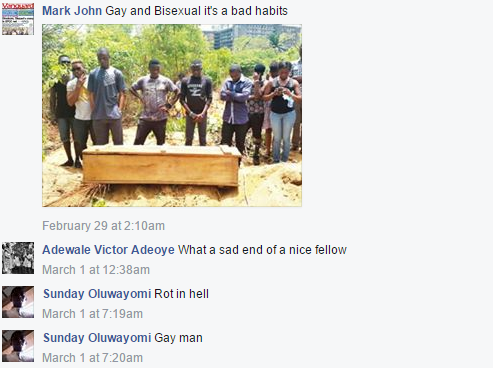 This is appalling, disgusting, horrific and totally inhuman, but how many Nigerians would really come out to condemn this atrocity without a BUT? This reminds me of the ALLU 4 Case when Nigerians came out enmasse to condemn the lynching of 4 undergraduate students in Portharcourt who were accused of stealing mobile phones and laptops. I wrote an article then, asking, “Would the percentage of Nigerians condemning Jungle justice decrease if the ALUU 4 victims were gays caught in the act?”

Many claim they don’t support lynching or jungle justice yet they are always quick to blame the victim.

“Why was he gay?” They ask in self-righteous indignation.

“Didn’t he know being gay is a sin? They judged from their religious hypocritical high horse.

“He should know that men should not be sleeping with men” They conclude from their self-inflicted ignorance.

This is murder. The burning of the house is arson. Concerned Nigerians are already asking Facebook to take down some of the hate speech posted on the Victim’s wall, and I believe that of the repulsive Ogbeni Ade Omo Ade has been removed. This is a commendable step, however, it is not just about asking Facebook to take down the posts, I think the Nigeria government should be called upon to act too.

A murder has been committed. Innocent life brutally taken by a gloating, identifiable mob. A councillor’s home has been burnt down. The council man is on the run for his life because of his alleged bisexuality. His wife and children lives are at risk. What is the government doing about this or is it going to be just business as usual?

This horrific incident allegedly happened in Ondo state, South West , Nigeria. Ondo state is well known for producing many academics and its high regard for education. How on earth did this happen in Ondo state? But then it is Nigeria. Any atrocious thing can and do happen. Homophobia, biphobia and transphobia is rife in the country. Religion justifies their hypocrisy and hatred for anything concerning same sex love, and they have no regard for the rights and lives of sexual and gender minorities.

In this modern age, how is lynching a person acceptable behaviour? How is burning down a person’s home because he allegedly slept with another consenting albeit same sex adult a thing in this era? How does anyone explain celebrating the murder of a person because of sexual orientation? This has no place in a sane society, but then Nigerians are known to celebrate their special brand of insanity, which basically means celebration of atrocities that any sane and decent human being would frown upon.

We should remember that Nigeria criminalises Same Sex relationship and LGBT rights advocacy. This atrocious law stipulates 14 years’ imprisonment for anyone who engages in same sex relationship and 10 years’ jail term for individuals or organisations who support and advocate for lgbt rights.

After intense lobby by religious groups, notably amongst them, Anglican church and catholic diocese, the Same sex act prohibition bill was unanimously passed by the House of Assembly and the Senate. Despite outcry from the international community and LGBT rights activists both home and in diaspora, the then Nigeria president, Goodluck Jonathan, signed the same sex prohibition act into law on January, 2014. This outrageous law was welcomed and celebrated by many Nigerians, including some silly comrades and air-headed human rights activists who obviously think homosexuals, bisexuals and transgender do not deserve basic human rights.

Nigerian Gays, Bisexual and Trans Lives matter. Let us rally round to condemn this injustice.

Nigeria lgbt activists both home and abroad should put aside our differences and petty bickering to focus on this momentous task. We need to wholeheartedly do our bit to make Nigerian Gays, Bisexuals and Trans lives matter.

Of course, international solidarity is welcomed. An injury to one is an injury to all. Let us together fight this monster known as homophobia, biphobia and transphobia wherever it rears its ugly head. These murderers should be brought to justice. Make your voice heard. Support LGBT rights. Love shall win.

Would the percentage of Nigerians condemning Jungle justice decrease if the ALUU 4 victims were gays caught in the act?

Debunking the myths: Is Homosexuality, Bisexuality or Transsexualism Un-African or Unnatural?

This World Is Not My Home: Parody » « Why I identify as an Atheist : Secular Voices of Color