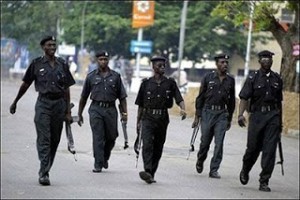 across the country. The right to organise peaceful protests was violated by a civilian government; many called it a breach of constitutional rights, with emphasis on the right to freedom of association and freedom of expression.

This violation and highhandedness must be thoroughly condemned, however, while condemning the government; honestly ask yourself the following questions-

It is said that he who comes to equity must come with clean hands. I am aghast at the sheer volume of violent comments and threatening messages that advocates of LGBT rights receive daily. 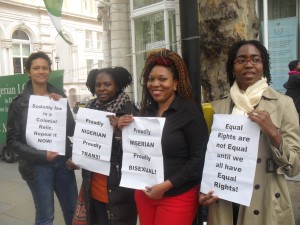 Following the protests rallies I coordinated under the campaign group ‘Nigerian LGBTIs in Diaspora Against Anti Same Sex Laws’ to protest against the anti same sex marriage bill, many Nigerians left hateful comments online, many threatened and advocated that LGBT protesters be stoned. Also, after the publication of a press interview I granted a major Nigerian newspaper on LGBT rights, many Nigerians left violence related comments online, the interview was reposted on some Nigerian community websites without authorisation and pictures were taken from my personal blog (copyright infringement applies and yes, I can sue you for illegitimate use of my photographs). Most of these comments were violent threats and encouraged the violation of the rights of Nigerian Lesbians, Gays, Bisexuals and Transsexuals.

Many dared Nigerian Lesbians, Gays, Bisexuals and Transsexuals organisations and their supporters to come out in the open and protest the Anti Same-Sex bill in Nigeria, with violent language that clearly indicated that LGBTs would be protesting at the risk of their lives. Nigerians, not just the government but also civilians would gladly beat up LGBTs and their supporters.

The Anti same-sex marriage prohibition bill violates fundamental human rights that are guaranteed under Nigerian constitution and various human rights international agreements that Nigeria is a signatory to. This bill could lead to political and social harassment of people for their actual or imputed sexual orientation. It could also stifle freedom of expression and association through the proposed ban on organisations that support Lesbians and gay rights (Position paper).

During the Public hearing of the bill, the few LGBT supporters that attended the hearing were intimidated, bullied by religious groups present and also harassed by the senators! The LGBT supporters were almost beaten up by members of the public outside the National Assembly (Report of public hearing); progressive organisations in Nigeria did not co 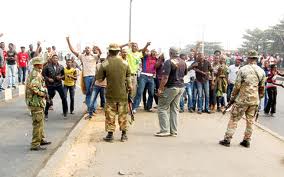 If passed into law, many Nigerians including the police would use the draconian law as a license to intimidate and harass citizens based on their actual or suspected sexual orientation. The passing of the bill would give official validation to the harassment of sexual minorities and many homophobic persons would use it as a license to discriminate against lesbians and gays. Hate crimes are not uncommon in Nigeria and already there are reported cases of people kidnapped for their actual or suspected sexual orientations by unscrupulous Nigerians who are eager to make money from such discriminatory laws. 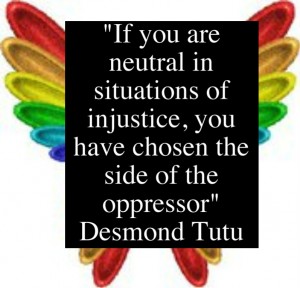 If you are neutral in situations of injustice, you have taken the side of the oppressors. It is unfair to encourage the oppression and discrimination of another while you demand that your human right not to be discriminated against be respected!

It is barbaric, unconstitutional and a blatant violation of human rights to demand that Lesbians, Gays, Bisexuals and Transsexuals be locked up for 14 years or for even a minute because of their sexual orientation! Lesbians, gays, Bisexuals and Transsexuals have committed no crime by being who they are, we have not harmed anyone and we constitute no harm to the society.

If you insist on making us criminals, at least let us know the victim of our supposed crime!

How does consensual adult relationship harm you as a person?

How does my adult consensual love harm the society?

Who is the victim of my same sex consensual adult relationship?

Sodomy law is a relic from British colonisation. The British parliament and many of its former colonies e.g. Canada, Australia, South Africa and India have repealed the law. Why is Nigeria clinging and seeking to strengthen this antiquated law through the proposed Anti-same sex relationship bill? The argument that any sexual act or relationship that deviates from the standard heterosexual norm is against African culture is using “culture” to sanction the erasure of dialogue about alternative sexualities and to condone homophobia, therefore constituting a form of cultural violence. A society that stifles sexual and gender identities discourages the recognition of human dignity.

When you demand that President Goodluck Jonathan recognise your right to protest, freedom of association and freedom of expression, remember these rights belong to all of us irrespective of our gender, class, religion, ethnicity or sexual orientation.

All human beings are born free and equal in dignity and rights. LGBT rights are human rights. BTW, in case you are in doubt, Lesbians, Gays, Bisexuals and Transsexuals are HUMANS. Occupy Nigeria, Occupy for Equality!

Here is the Press statement on the bill and kindly sign the petition against the bill –https://www.change.org/en-GB/petitions/president-goodluck-jonathan-don-t-sign-the-jail-the-gays-bill-into-law.

Rachel Jeantel is not on trial: Judging her accent is a show of your ignorance not hers. » « OCCUPY NIGERIA FOR A RESIGNATION OR A REVOLUTION?