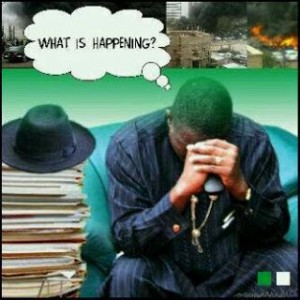 (First Published in January 2012 during the fuel subsidy removal saga)

I cannot even muster enough energy to be angry at President Goodluck Jonathan; he leaves me with a sense of shame as a Nigerian! Whenever I acknowledged him as President, I immediately apologize because I feel a great sense of shame for presenting such a nincompoop to sit amongst world leaders. It is said that followers deserve the kind of leaders they get, maybe Nigerians deserve a Goodluck Jonathan, afterall only fools elect visionless buffoons as leaders. 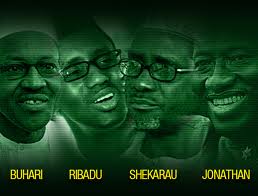 I was never excited about the elections that heralded Goodluck Jonathan in as president, in fact I couldn’t even bring myself to discuss it because there was simply nothing to discuss. There were no worthy LEADERS among the key contestants, no meaningful manifestos to debate, nothing to stir a vision, nothing close to a mission beyond the contestants’ mission to OCCUPY ASO ROCK! Nigerians now want to OCCUPY STREETS, was it not on the same streets that they lined up to vote in a Goodluck Jonathan?

Not so long ago, Nigerians occupied streets to campaign for Goodluck, voted in a Goodluck in the hope that some goodluck would rub off on them, now they want to shake off this goodluck, how funny! Nigerians are slowly waking up to the realization that to shake off this “goodluck” syndrome, one must confront reality, go back to the streets and reclaim the land that was gladly but foolishly given away in a ballot box in exchange for ‘goodluck’ charm, like some of our ancestors sold their brothers into slavery in exchange for a mirror and a bible! 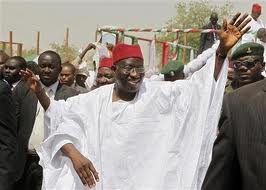 During the elections, the campaigners spoke more than the contestants. Goodluck Jonathan was popular because he had no shoes while he was going to school, but “look at him now”, they all chorused while they marveled at the vice president who had the ‘goodluck’ to have a sick boss who died in office leaving him to fill a vacuum. In fact Nigerians spoke for him to fill the vacuum even before his boss catapulted to the great beyond!

He never had the need to speak for himself, he had nothing to say and many gullible Nigerians loudly did the talking on his behalf because he once had no shoe, and he is from a region that suddenly had the ‘goodluck’ to produce the President!

Nigerians were entranced by his goodluck and decided they wanted some of that goodluck! Now see what Goodluck has brought Nigerians!

Nigerians must learn to rely more on commonsense than luck. Nigerians need to grow up and accept the following facts as self evident truths:-

Until Nigerians understand who the real enemies are, we won’t make meaningful progress in the geographical entity called Nigeria. Nigerians conveniently blame Goodluck Jonathan for the woes bemoaning Nigeria, but they forgot they empowered him even when he had no concrete plan for the progress of Nigeria, they voted him in because he once went to school without shoes! Now that there is even no schools to go to, not to talk of wearing shoes, Nigerians are now screaming blue murder!

Nigerians relied on Goodluck promises without demanding for answers, just the same way many Nigerians believed in their pastors anointing to see them through the year! Now that ‘goodluck’ promises just like Pastors anointing is not working, it is time to wake up from fantasy land and face up to reality. We could ACT to redefine our reality or MOAN until the next election to change the leaders through ballot boxes. For many Nigerians, I suspect it would be the same old ‘we go survive, God is in control’ syndrome. Religious opium takes time to wear off! 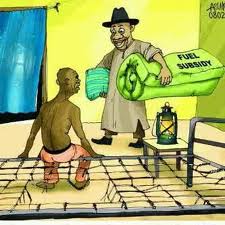 Yes, we need to occupy the streets, but let us not occupy without an alternative. Let us not be another Goodluck Jonathan who occupied without a mission or plan in place!

Are we contented to go back to how things were before the announcement of fuel subsidy removal? When we demand that President Goodluck Jonathan steps down, we should have a unanimous plan for the important question of who or what fills the vacuum.

Are we redefining the entity called Nigeria through a Sovereign National Conference?

Are we seizing power through the Occupy Nigeria protests or are we just going to ride with the wind and see where it takes us?

What really are the plans beyond occupying the streets?

As a former student activist, a trade unionist and a human right defender, I am used to occupying the streets, but I must 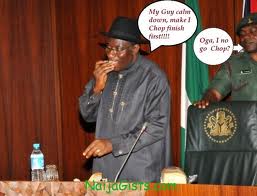 confessed I was more passionate about occupying the streets to fight military dictators like Babaginda, Abacha and a farmer from Ota who came to power through a rigged election, than I am about occupying the street to fight a Goodluck jonathan. The other despots had a mission, they also had no mandate from the people therefore it was easy to be angered by their dictatorship and undeserved leadership. Nigerians never gave an Abacha, Babaginda or Obasanjo the mandate to rule or serve, but Nigerians overwhelmingly gave President Goodluck Jonathan the mandate to rule, serve and steer us in his rudderless ship! Nigerians must learn that we cannot eat our cake and have it. It is time to grow up!

There is already bloodshed, more would likely follow, since being on the barricade makes me a likely victim, I would like to know exactly what I am donating my blood for.

Is it just for the resignation of Goodluck Jonathan, fuel subsidy removal or for a redefinition of the entity called Nigeria? Maybe if I knew exactly what I am occupying the streets for, I could look beyond the castrated figure called Goodluck Jonathan and muster enough anger to passionately engage in a ‘do or die battle’ to reclaim Nigeria.

We already know that there are many ills bedeviling Nigeria including corruption, lack of security, religion, unemployment but who exactly are the enemies? I wouldn’t be surprised if in all this turmoil, Jonathan simply wets his pants and asked Madam Ngozi Okonjo-Iweala “wetin we go do next madam?”

Goodluck Jonathan is not a worthy adversary. He is a president with no vision, no backbone and no agenda who once had no shoes but now has many designer shoes thanks to Nigerians!

Goodluck Jonathan is wearing a shoe too big for him right now, but truth be told, Nigerians gladly gave him the pair of shoes, even if oversized! 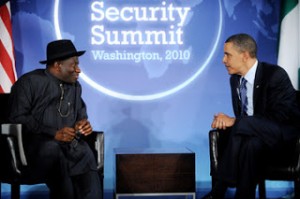 It is our democratic right to protest against bad economic policies like the present removal of oil subsidy, lack of security, unemployment and also protest against violations of our constitutional human rights like anti same sex marriage bill and unlawful killings by state apparatus, even if we voted in the government in power. However fighting this becomes a little tricky when the man and his political party never said anything much about economic policies and plan for the country beyond bringing Nigerians ‘Goodluck’!

For us to move beyond this debacle, we must understand how we arrived at this tragedy; the unfounded belief in GOODLUCK!

See you at the barricade! Should I say Goodluck? Nope, we don’t need it. 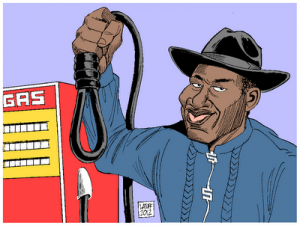 He who comes to Equity must come with clean hands! » « Cultural Censorship: My Coming Out Is Not A Threat To Your Closet!