What a sad society we live in with people valuing appearances more than content. Hypocrites who in their own actions and judgments are no less racist than Zimmerman who shot a black boy because he thought his black skin did not belong in his precious white neigbourhood. Now, those racists think Rachel Jeantel’s accent and mannerisms do not belong in their posh court.

Rachel Jeantel was herself in the courtroom when she bravely stood up to testify as a crucial witness in the court. Even though It was not a spotlight she wanted, it was not a scenario she hoped for, it was not even a publicity she embraced, yet she did her duty and stood up in that courtroom to ensure justice or at least the semblance of justice for a friend whose life was cut short by the bullet of someone who felt ‘threatened’ by his skin colour. Rachel Jeantel has every right to be herself in that courtroom. 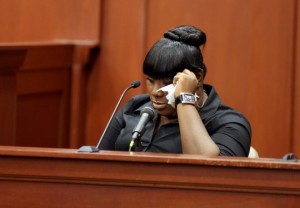 And shame to all the self loathing blacks who says she gives a black woman a bad name. Her accent, her weight, her mannerisms, her skin or hair is not what is on trial; it is the murderer of her friend that is on trial.  You should be ashamed of yourself for being diverted by such trivial as her weight or accent which btw is none of your business.

Unfortunately some black people don’t get it too. The fact that she does not speak perfect English in a ‘polish’ accent does not make her a bad representation of Black American women. I have not watched her court testimony in full, but nothing, absolutely nothing justifies the terrible image many including some blacks are painting of her just because they think she exemplifies the stereotypical Black “hood rat”.

This 18 year old young woman should not be expected to suddenly transform into another person just because she is taking the witness stand to testify in the murder case of her 17 year old black friend Trayvon Martin, who was murdered by a racist.

Being a “hood rat” does not make her any less credible than the big cats.

I do recognize the ignorance and malice that the attackers of Rachel Jeantel are downing under. As I wrote in my blogpost Accents and the Tragedy of Self-Hate-

However with the uncontrolled audience that YouTube, Facebook and other online social networks attracts, I have recently been faced with so many malicious comments attacking my Yoruba accent. And funny enough or rather very unfortunately, 99.9% of these comments are from my country people who have similar accents! I couldn’t help but wonder why people would hate themselves so much as to believe that their accent is inferior? I have noticed this phenomenon is not peculiar to Nigerians alone.

It really is a tragedy that so many people are still under the chains of mental slavery. The belief that you are not good enough unless you are white, rich and skinny and speak English through your nose is still prevalent amongst many Africans.

Some actually thought such comments about my accent would offend me, but I just wonder why I should be upset because I have an accent that is unique to my place of birth and where I grew up. What is there to be ashamed of?  People who make such comments are ignorant and need to emancipate themselves from mental slavery.

Rachel Jeantel has every right to be herself on that witness stand, she is entitled to all her emotions and free to express those emotions the way she has been expressing them in the 18 or so years of her existence so far.

A day in court cannot nullify her life experience or personality and this does not make her less of a person or a symbol of ridicule.

No one has any business setting up a ‘Posh’ standard for her to live up to.

If you are uncomfortable with her “hood rat”, well ask yourself why, but definitely don’t take it out on her because she owes you no explanation or apology.

Again, RACHEL JEANTEL IS NOT THE ONE ON TRIAL. 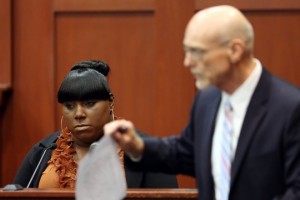 London Pride 2013: The Parade, The Protest, The Pride. » « He who comes to Equity must come with clean hands!