Well, the terrible thing that happened was I actually read the bible, and the good news is, reading the bible and other ‘holy’ books turned me into an Atheist!

With my evolved brain finally working to capacity, it did not take me long to figure out that there is no “God” designing our planets, dishing out destinies, taking care of our needs, waiting for us to go on our knees and ask so S/He/It shall give, busy keeping scores on our good and bad deeds, while stoking an eternal fire for those who didn’t stroke his ego while on earth to burn in hell for eternity. 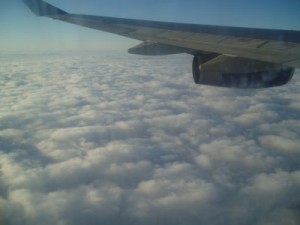 I am an atheist because there is no evidence of an omnipotent, omniscience, omnipresent being watching our every action from high above. And why not from down below anyway? I guess we don’t like the idea of stepping on, walking and shitting all over God. Well, “high above” made sense when heaven or space looked so impenetrable, but with space shuttles penetrating the skies and rovers curiously taking pictures from “high above” and none yet of a white bearded old man glaring down at us, there is nothing so scary about “high above” anymore.

It is unfortunate that many believers influence state policies based on personal religious beliefs, this should be a big No No.  It is indeed a great injustice to those who do not share these religious beliefs either because they believe in another ‘God’ and have different set of doctrines or simply because they have no ‘God’ delusion.

Many unfortunately tie our fortunes, misfortunes and mood to the workings of a God. While it might be flattering that the ‘creator’ of this universe is concerned about my mood swings and watches my every action,  it actually makes this creator looks like a pervert. I do not need a religion to feel high, low, solemn, guilty, moral, immoral, good, bad, favoured or blessed, it would be delusional to think so.

I do not believe in the existence of any God. I do not have a soul crying to be saved. I just wish everyone would appreciate that this is really no big deal!

Actually what is a big deal is when someone who does not care whether or not I have food on my table, shelter over my head or if my sexual needs are satisfied, suddenly gives a fuck about me burning in hell for eternity. And when they do pretend to care, like IMF loans, it comes with conditionality. For the believers, it is that i must accept their God as my personal saviour in exchange for their kind heart, while earning themselves some nectar paradise points. You don’t care about the hellish life I am already living but you care about the hell I might be condemned to and this somehow makes you a good person?

And let’s get this straight, in order for you to save me from this imaginary hell of yours, you are happy to make my life on earth a living real hell by denying me the right to my sexual orientation, right to marry my same-sex partner, right to eat pork, right to an active public life without being escorted by a man, right to show my face uncovered in public or the right to work on the Sabbath day. That does not look or sound like a good bargain.

As an atheist, I am happy to dismiss your idea that there is a God for lack of proof; it’s no skin off my nose. But as a human rights activist, I find the idea of an omnipotent, omniscient, omnipresent God in the midst of all these disasters and sufferings appalling! 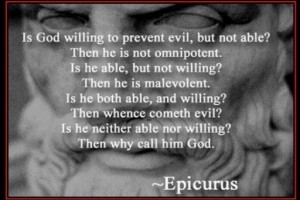 I am so disgusted when believers try to make excuses for their bigoted, vindictive, tantrum throwing God. Why would I want to worship someone who does not measure up to my moral code?

The idea of having a role model is to have someone who inspires and whom one even aspires to be like, but who in their right mind aspire to be like a serial killer, not to mention a genocidal, vindictive, egoist being?

What continues to perplex me is how conscious human rights activists who campaign against tyranny could actually have respect for a tyrannical God, be it real or imagined.

I guess the fear of the unknown do make many humans afraid to use their common sense. If believers read their bible beyond chanting “The Lord is my shepherd, I shall not want…” we might actually end up with more atheists than believers. And that would be a right step towards curing the cancer called religion.

(Enjoy the video at the top of this post, forgive the not so good sound editing, it was made when I first started posing before my laptop cam, I have since got better at both the posing and the editing 🙂 )

Debunking the myths: Is Homosexuality, Bisexuality or Transsexualism Un-African or Unnatural? » « Welcome To My World!