It seems I am not allowed to talk about the tragedy in Orlando without acknowledging the tragedy in my own backyard (even though Nigeria has not been my backyard for a few years now). There is always that one person or persons, keen to point out that I am more sympathetic to issues outside the country than within. But how is that surprising? After all, gory religious happenings are the norm in Nigeria, so what else is new?  In my next few blog posts, I shall endeavour to cover a few of these religion motivated gory stories from Nigeria. First, let’s talk about the case of the woman that was allegedly beheaded for speaking against Prophet Mohammed.

On Thursday June 2, 2016 an angry mob mostly consisting of Muslims youth in Kano state, northern parts of Nigeria where Sharia law is observed, allegedly beheaded a woman in the marketplace for the offence of blasphemy.

The victim was 74-year-old Mrs Bridget Agbahime. She was a Christian woman from Imo state, southern part of Nigeria. The woman was a trader in the popular Kano market, Wambai and was in the company of her husband, Pastor Mike Agbahime, when the tragedy occurred.

Since the news broke and gory pictures of a woman’s beheaded body and head on pike made the papers and widely shared on social media by outraged Nigerians, there has been a dispute as to whether the woman was beheaded or just beaten to death by a mob. The husband, Pastor Mike Agbahime has since clarified that his wife was beaten to death by a mob, she was not beheaded.

It was reported that the Public Relations Officer of the Kano Police Command, DSP Musa Magaji, confirmed the incident.  The PRO said:

At about 4 30 pm, there was a disagreement between the murdered woman and some traders bordering on religion.

The woman was said to have blasphemed Prophet Mohammed, which did not go down well with the mob.

The police were said to have rescued the husband from the mob, however, no one was immediately arrested. Which says a lot. A mob. A dead woman. Police rescued the husband from the mob but there was no immediate arrest? Unfortunately, that is the sorry state of affairs especially when it has something to do with religion in sharia parts of Nigeria. Following public outcry, Dauda Ahmed, the man alleged to have mobilised the mob against the woman on the allegation that she blasphemed against prophet Mohammed has since been arrested alongside another suspect identified as Subeiru Abubakar.

After 3 days of the incident, Nigeria President, Mohamed Buhari finally made a statement and what did the Sharia supporting, ex-military dictator has to say about the crude action of his kinsmen and fellow sharia enthusiasts? Well he said:

Let us learn to respect each other’s faith, so that we can know each other and live together in peace

Yes, the Sharia supporting President’s statement was an indirect cause and effect blame of the victim. Don’t antagonise religion and you won’t be decapitated. Sad but not surprising.

Religion is still considered a sacred thing not to be messed with in many parts of Nigeria, especially 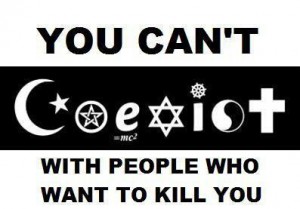 the Northern part where Sharia law reigns supreme. Blasphemy against their holy prophet is deemed an offence worthy of immediate death. They hold their beloved holy book, the quran, above any human life. And it says right there in their holy book that infidels should be killed.

When we defend religion, when we hold dare a book that actually condone such killings, we are part of the problem. Whether we like it or not, for the human race to move forward, we need to leave the burden of religion behind. Religion will continue to cast a dark shadow over societies that hold these ridiculous but very harmful beliefs to be true and sacred.

I look forward to a day when the world is rid of all superstitious beliefs.

I look forward to a day when religion is not a viable excuse to commit atrocity.

I look forward to a day when religion is not an excuse at all because religion has become obsolete.

Yes, a world where religion is a distance memory is possible. When we rid the world of religion and its attendant superstitious beliefs, we eradicate one very powerful justification to commit atrocity such as the one that befell this poor woman.

A world without religion is possible, let’s do our part to bring it to fruition.

WHY I SPEAK OUT AGAINST RELIGION

Macheted and Beaten to a Pulp for not Fasting: Happy Ramadan! » « Baby, You Are Beautiful – Dance Video