As someone who became fiercely politically active as a young woman in a very patriarchal society, I was often ‘showered’ with the words “You are a man!” It was considered the highest praise you could give a woman for her bravery and courage while referring to a man as a woman is considered a below the belt insult. If only I had a penny for every time I heard these words from my fellow comrades, colleagues and mentors who actually should know better.

Please understand that calling a woman “a man’ because of her achievements or courage is NOT A COMPLIMENT. Those words are nothing but an insult to the woman, her achievements and gender identity. You do not honour me by calling me “A Woman like a Man“, in fact with such words you deny my gender identity and degrade my biological sex. I am a Woman and Proudly so.

We are all HUMANS irrespective of what the various creation myths say. Women demands recognition and respect as human beings. Brave and courageous women achievers do not need to be called A MAN as a compliment. Being called “A MAN” does not elevate us to the level of human beings; we are already human beings irrespective of our sex or gender identity. 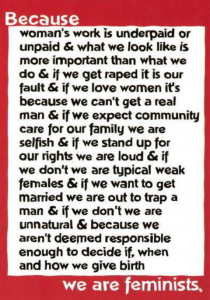 Kindly recognise and respect my gender identity, this I believe is not too much to ask!

As we celebrate more than a decade of International Women’s Day, feminisation of poverty continues; Reproductive, Productive and Domestic roles still hold down the working woman from reaching her full potentials. The triple oppression of Racism, Classism and Sexism persistently  affect our unity. Let us continue to fight all the Isms and Schisms that jeopardise our strength.

The degree of emancipation of women is the natural measure of general emancipation. Every society’s greatness can be measured by the way it treats its most vulnerable members. Every human being is born equal in rights and dignity.

You do not have to be a woman to support woman’s rights.

You don’t have to be gay, bisexual or Trans to support LGBT rights.

You don’t have to be a sex worker to support sex workers’ right to organise, unionise and work in a safe environment.

You don’t have to be an animal to support animal rights.

And in case the aliens ever invaded, let’s hope you don’t have to be a human being to support human rights. We all could be in the minority sometime!

Stand up against oppression of women, stand up for equal rights, empower a woman today, emancipate yourself from mental slavery and DEMAND your inalienable human rights! No human being is born subordinate to another. No woman is born to satisfy a man, you are born to create and define your own ‘destiny’, even in the face of all odds. Your happiness is supreme.

Fellow sisters, assert your right and recognition as human Beings!

Happy International Women’s day to you all!

BOB CROW: One of the last of a dying generation of committed Trade unionists bows out at 52. » « Another inglorious medal for religion as Boko Haram invades secondary school hostel, Kills 43 students in the name of Allah