PRESS STATEMENT – Nigeria’s ‘Jail the Gays’ legislation is a blatant violation of fundamental human rights of Sexual minorities and every Nigerian. 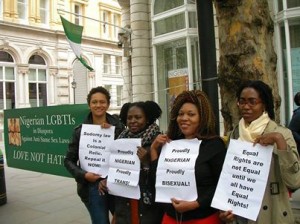 Nigerian Lawmaker unanimously passed the ill-thought out draconian bill earlier in 2013 and sent the harmonized version of the bill to the president for assent on 30 Dec, 2013. The bill was reportedly signed by the president on 7 January 2014.

Nigerian LGBTIs in Diaspora Against Anti-Same Sex Laws feels it is a shame that President Goodluck Jonathan appended his signature to such a draconian, irresponsible and undemocratic bill, thereby criminalizing an innocent section of Nigerian populace.  It is unfortunate that a supposedly democratic nation would actively seek to criminalize a section of its population whom has not caused harm to anyone.

The Same Sex Marriage Prohibition law stipulates a 14 years jail term for same-sex marriage and 10 years imprisonment for public show of same-sex affection. The legislation stipulates a 10 year imprisonment for anyone who aids, abets or witness same sex relationship or marriage. The law also imposes a 10 year jail term on human rights defenders who advocate for LGBT rights.

Nigerian LGBTIs in Diaspora Against Anti Same-Sex Laws believes that the Same Sex Marriage Prohibition legislation is a blatant violation of human rights of Nigerian gays, lesbians, bisexuals and transsexuals. The law also transgresses on the constitutional right of every Nigerian.

Nigerian LGBTIs in diaspora against Anti Same Sex Laws affirms that LGBT rights are Human Rights. This homophobic legislation violates fundamental human rights that are guaranteed under the Nigerian constitution and various regional and international human rights laws that Nigeria has ratified. This law contradicts parts of the Nigerian Constitution.

The implications of the signed Same Sex Marriage Prohibition legislation reach far beyond its title.

The law encourages the political and social harassment of people for their actual or imputed sexual orientation.

The law also stifles the rights to Freedom of Expression and Freedom of Association through the ban on organizations that support Lesbians and gay rights. It even prohibits holding meetings to discuss LGBT rights.

This in a democratic nation is not only preposterous but also a slap on the face of every Nigerian who fought to oust the military regimes so as to pave way for a democratic Nigeria. These hard won fundamental human rights are now threatened under a democratic regime.  The homophobic law is an aberration.

Nigerian LGBTs in Diaspora Against Anti Same-Sex Laws fears that the signing into law of this draconian bill gives official validation to the harassment of sexual minorities. This legislation would provide a cover for unscrupulous individuals and state institutions including the police force to hunt down, intimidate and harass citizens based on their actual or suspected sexual orientation.

Nigerian LGBTIs in Diaspora Against Anti Same-Sex Laws calls on all progressive Nigerians to oppose the Same Sex Marriage Prohibition law. This law affects every Nigeria; it erodes our hard fought for constitutional human rights including Freedom of Expression and Freedom of Association.

Nigerian LGBTIs in Diaspora Against Anti Same-Sex Laws urges the international community to stand in solidarity and support the human rights of Nigerian Lesbians, gays, bisexuals and Transsexuals. The world cannot afford to keep quite in the face of blatant violation of human rights.

Nigerian LGBTIs in Diaspora Against Anti Same-Sex Laws demands for justice and equality for every LGBT Nigerian, we therefore call for the immediate repeal of this draconian legislation. 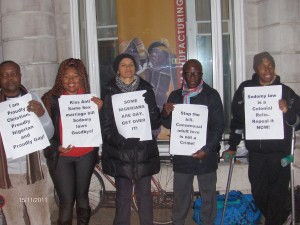