London Black Atheists (LBA) celebrated its 2nd anniversary on Saturday, 25 October 2014 at Conway Hall, London.  It was also an opportunity to mark Black History Month. It was a fabulous evening with fantastic people, amazing talents and delicious food and drinks.

Clive Aruede and a few other atheists with the aim of bringing together black atheists in London founded London Black Atheists two years ago. LBA provides a nurturing atmosphere for black atheists to come out of the closet and interact in a safe environment. 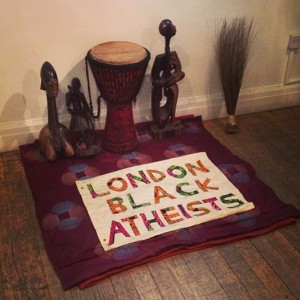 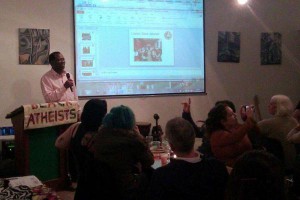 London Black Atheists organises meetups including talks and social outings. It announces scheduled meetups on its Meetup page. Its ‘About info’ states:

London Black Atheists, despite the name Black, is a group that welcomes all atheists. We want to free our minds and our communities from all religious pollution and corruption. Our mission is to encourage ethnic peoples of all stripes and particularly of the African Diaspora to come out as atheists to other atheists. We will not reveal your identity publicly. We provide a friendly, welcoming and supportive environment for people who want to declare themselves as atheists but are wary of receiving a hostile reaction from their family and friends, leaving them isolated with no one to turn to and nowhere to go.

For social and historical reasons Black people tend to be very religious. The default position in Black society is that religion is a good thing that should be followed without question. We disagree. At some times and in some places, religion in the past has provided social cohesion, schools, hospitals, charities and the like, but the overwhelming evidence is that nowadays religion is divisive, physically harmful, mentally destabilising and morally bankrupt. It is a brake on social and scientific progress. In those parts of the world where it is a dominant influence, it is positively lethal.

Since its inception two years ago, London Black Atheists has successfully organised many Meetups, debates, conferences, and social outings. At 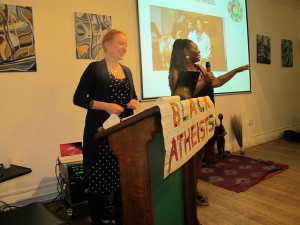 one of its meet ups, I was invited to do a presentation on my book ‘Freedom To Love For All : Homosexuality Is Not Un-African‘.

Recently, it organised a panel discussion on Witchcraft belief: Murder and Misogyny in the 21st Century with a lead talk by Nigeria humanist, Leo Igwe.

London Black Atheists is supportive of LGBT rights and its members have shown support for persecuted African LGBTs by attending LGBT rallies in solidarity. LBA is also pro women’s rights.

The anniversary was a diverse mix of ethnicity and culture, which added a vibrant atmosphere to the exhilarating evening. There was a choice selection of African as well as Caribbean food. There were also refreshing drinks including local African brew, palm wine.

There was abundance of talents on display too. Clive Aruede anchored the evening, and Lola kicked off the event with outstanding stand-up comedy. 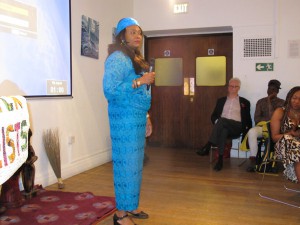 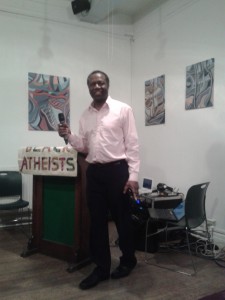 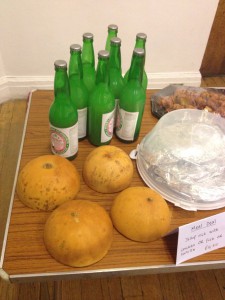 I took to the stage to perform my poem ‘They say it is Culture, I say it is Torture.

Audrey, a fellow black female atheist also performed her poem ‘The diamond between my legs’ to the pleasure of the appreciative audience. 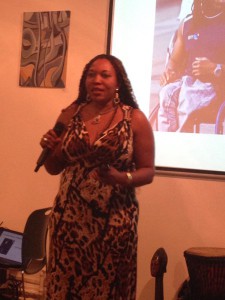 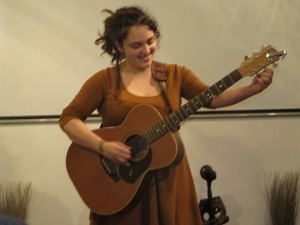 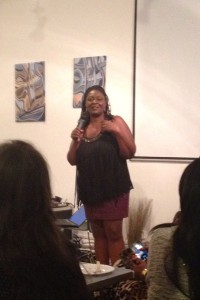 An African drummer was on hand to provide great African drumming and he got many people swaying to his masterful beats. Back home in Nigeria and I presume in many African societies, when a drummer takes to the stage, it is customary to have a few backup dancers gyrate to the beats. It was in this spirit that fellow atheist Serah and I took to the dance floor to gyrate to the scintillating African beats. I twerked to the ancient beats the cultural way i was taught to since I was a kid and it was such fun! 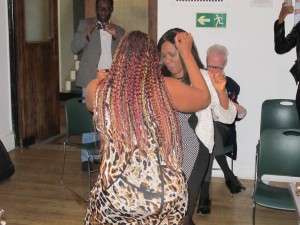 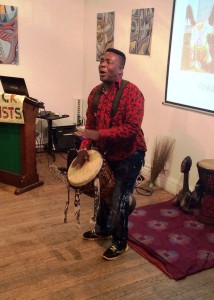 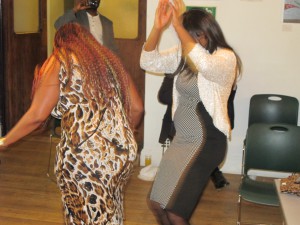 The book swap table proved popular with its array of interesting books on display ready to be swapped or taken away for as little as 50p. The raffle ticket/prize draw session was also a big hit.

I was glad to meet some Freethought blog commenters at the event. I actually attended the event with a regular Freethought commentator who happens to live almost in the same neighbourhood as myself.  A few other people came up to me to ask if I blogged at Freethought blog. That was interesting as it was good to put a face to the names. I hope those of us who are UK based Freethought family would organise a social meet up soon, that would be fun. 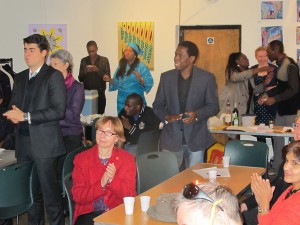 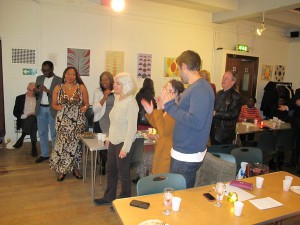 It was good to see atheists enjoy themselves and I hope there will be other opportunities to let our hair down in a safe space. All debate and no play makes atheism a dull movement.

Enjoy the pictures from the event and do check out London Black Atheists events on Meetup and follow on Twitter @LdnBlkAtheists, 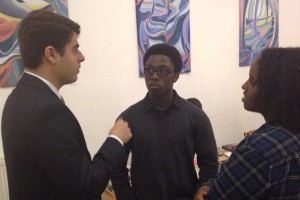 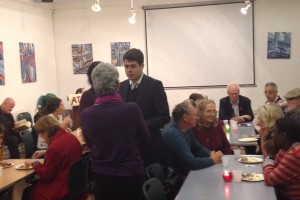 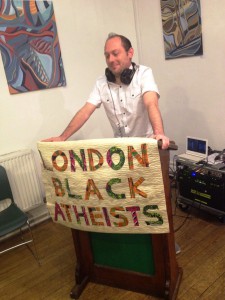 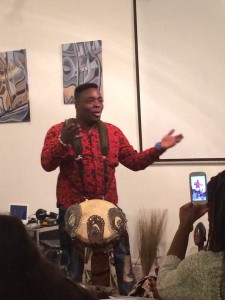 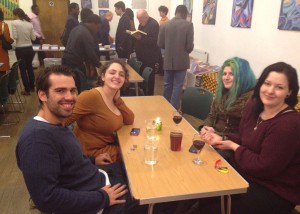 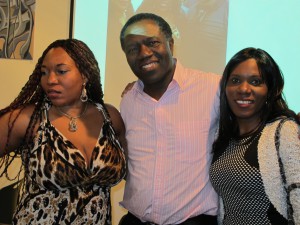 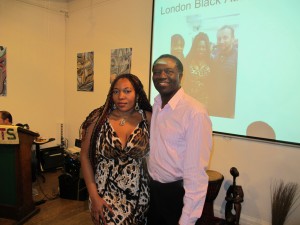 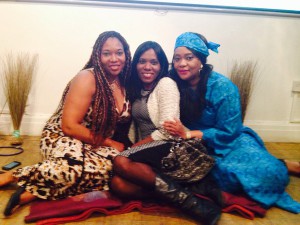 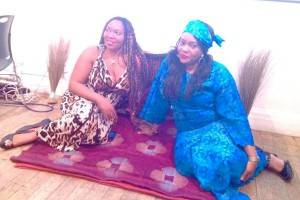 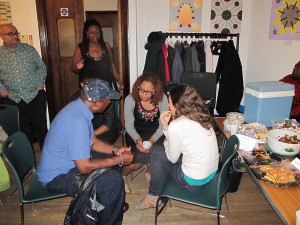 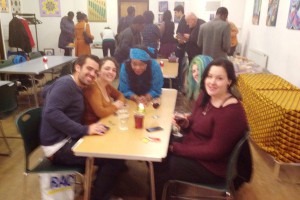 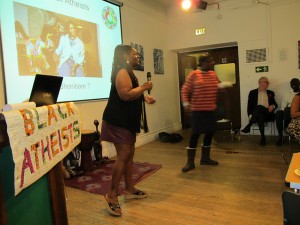 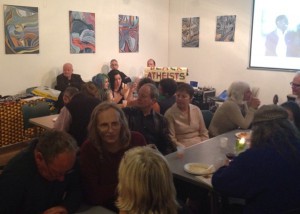 Culture is not an excuse to perpetrate injustice; LGBT Rights are about Human Rights not Culture. » « Why I hate some supposedly wise sayings: Paradise points are not a reason to help!