I don’t write much about trans issues, because of a combination of being ignorant, and not having any personal stake in the issue.

The “no personal stake” question is important, to me, since it’s a crucial part of my opinion regarding issues that touch on other people. Namely, if it’s not harming me then it’s none of my business, except from a philosophical/theoretical standpoint. Regarding trans issues, that has only touched on me peripherally a few times, when I used some public restrooms and noted that there were gender-neutral facilities. I did not care in the slightest, although I thought it was a respectful and cool way for that organization (The Frick Museum in Pittsburgh) to handle an issue that was, at the time, contentious.

When an issue is contested, the scope of who has a personal stake in it is, perforce, enlarged. That’s the entire purpose of contesting it, after all: enlarge the issue and re-litigate it. So, when North Carolina politicians raised the “bathroom bill” I recommended that the Commander-In-Chief of the US military (at that time, Barack Obama) respond by offering to close military bases in North Carolina to save them the difficulty of figuring out who pees where. It was not a serious recommendation because I knew that Obama would not actually do anything courageous or confrontational. 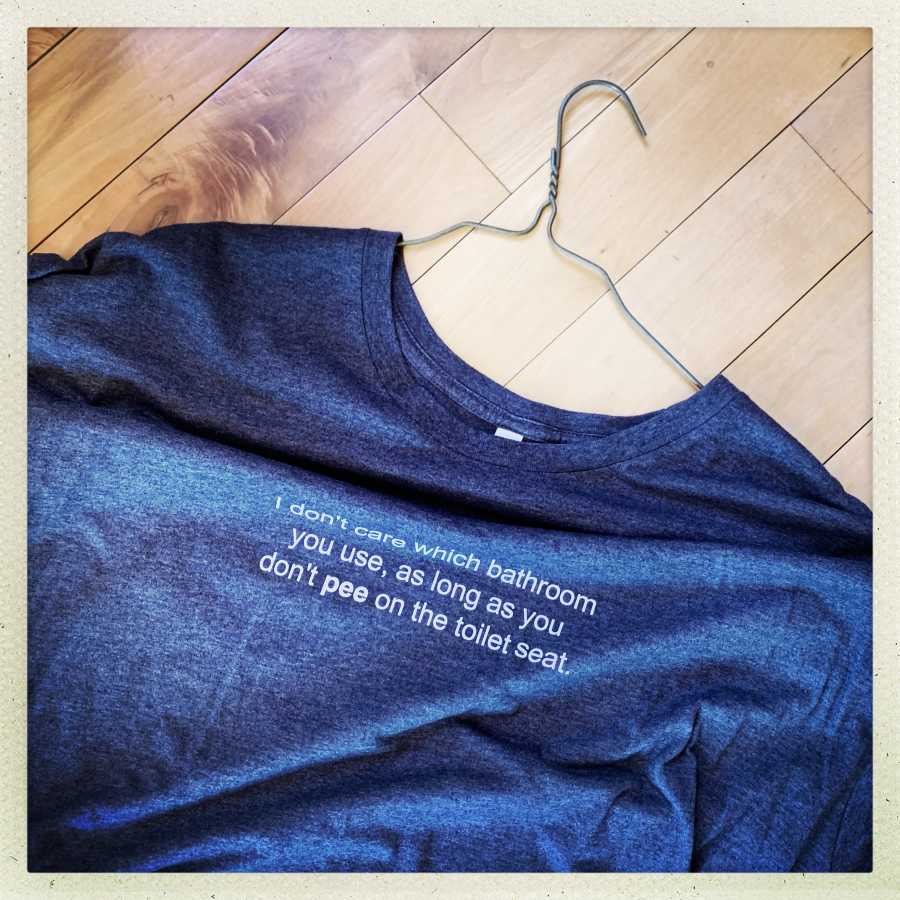 Literally, the least I could do was have a Tshirt made to wear at the last computer security talk I gave in North Carolina. Interestingly, one of the other conference attendees asked me “why is that any of your business, you’re from up north?” Good point, except I fall back on the idea that when the North Carolinians raised the issue to a matter of public policy, as a member of the public, it involved me. After all, I faced a potential “penis check” if I was using a bathroom in North Carolina, now, and I felt that North Carolina had gone pretty badly off the rails at that point.

That’s about as “active” as I have gotten on trans rights issues, because it has always been apparent to me that: as trans-people are humans, and there is a question of “human rights” then trans rights are human rights and thus the whole thing collapses down to a question of social equality and natural equality. None of that is complicated to me, so I have not dwelt on it here. It’s sad, to me, that such an obvious thing is an issue for people who want to re-litigate the rights and reality of perfect strangers – it’s none of my damn business, and it isn’t theirs either.

Recently H.J. Hornbeck, who pays attention to this issue, mentioned in backchannel that over at Ophelia Benson’s blog, I was mentioned (perhaps “damned with faint praise” is a better description) in a comment: [bw]

IMHO, Mano Singham and Marcus Rannum are the only sane bloggers left there, particularly the way Mano has just let a push back against TRAs flow. Mano took one sip from the TRA cup when he asked Crip Dyke for more info on trans* issues, but that must have been in private, as it hasn’t sullied his blog. Marcus may have had half a glass, but again, it is minor – his writing on computer security and military industrial complex stupidity is well worth the price.

This is … awkward. I didn’t realize that there was a cup being passed around, because apparently I missed my turn, or I was blacking out like Brett Kavanaugh. I am not a ‘TRA’ specifically, though I support trans rights – of course I do – because transpeople are human beings with a full panoply of social and natural equal rights.

As I said, I am pretty ignorant about trans rights and trans-phobics and their agenda, so I haven’t weighed in much on that topic, although now, I will:

I absolutely support trans rights. In general, I always support the rights of an individual to social equality. In cases where one person’s
equal rights conflict with another’s, I apply the “harm test” – does one person’s ‘right’ harm another’s? Since ‘rights’ that cause harm are not, in fact, rights, but rather aggression/oppression, I track toward the oppressed, always. Failing a compelling argument of harm, I track toward an individual’s liberty.

Individual rights cannot be debated, because to debate them implies that they need to be re-litigated and re-litigating absolute rights can only mean reducing them. For a concrete example, asking “what bathroom should a trans person use?” can only be an attempt to reduce their absolute rights by questioning them. Put differently, the only answer to “what bathroom should a trans person use?” is “whatever fucking bathroom they want, as long as they don’t pee on the seat.”

We should be suspicious whenever someone comes along and says “let’s put these rights back on the table for discussion.” Because there is exactly never a situation in which someone wants to re-litigate someone else’s existence or rights that is not an attempt to oppress them.

Rather than asking “what bathroom should a trans person use?” we should be asking the person who asks that, “who the fuck are you and how does it affect you?”

Please pass the cup around again, I wish to quaff deeply of it.

I worry that, perhaps, my presenting the issue of bathroom rights might unduly tilt people’s perception of my beliefs in that direction. So I will say for the record: I understand that it’s about more than bathroom rights. It’s about a whole panoply of rights – and, in every case that I’ve been able to think of so far, I fall on the side of the rights of the individual – with the implicit additional assumption that nobody has a right to cause harm. If someone wishes to argue that transpeople’s rights need to be reduced, that argument needs to be coupled with an argument regarding harm (because if they cause harm, then that’s not a right.)

I’m also familiar with certain arguments that trans athletes will have unfair advantages, or something like that. It seems to me that the issue there is similar to athletes with disabilities that may have prosthetics (e.g.: Oscar Pistorius) that give them an advantage over standard human equipment. It was thinking about that issue that made me realize that my other standard “does it affect me?” is important. I could not care less; that sort of thing is between the athletes and the judges and possibly the fans – but none of it affects me, so I am not qualified to have an opinion about it.