You’ve all seen the NRA’s imagery of the declining and clueless actor, waving a gun, attempting to reprise his role as Moses the lawgiver. It’s memorable. It’s sad. It’s metaphoric. 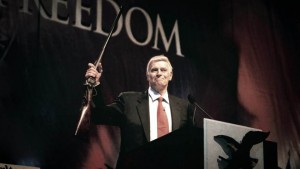 From my cold dead hands

I’ve been on the fence about gun control for a very long time. The short summary of my past views is that I’m in favor of a national referendum on gun control, and have always thought it would be a good thing to mandate gun storage in safes, firearms insurance, etc. As my views have evolved, I’ve realized that I cannot recommend and support a gun control regime that makes it easier for the wealthy and powerful to own guns – that’s actually a big piece of the problem.

In this posting I’m going to outline a proposal for how the US should deal with guns, then offer some of the reasoning justifying it. I recognize that it’s not going to happen, because the forces arrayed against the citizens of the US are going to force them to endure this “freedom” whether they want it or not. I had originally planned to try to sneak up on this topic with a series of socratic-style pieces, but given the climate of the day it seems best to just throw the dice, not expecting anything to come of it. The hole we’ve dug for ourselves and been pushed into is too deep for rationality to have a chance, anymore – what we’re dealing with, now, is the downstream effect of over 100 years of propaganda in which individual liberty, toxic masculinity, political divide and conquer, and class warfare are all neatly tied up in a great big snarl of barbed wire.

On With The Proposal

The key is “From my cold dead hands” as the NRA says.

We propose a referendum to disenherit gun ownership for future generations.

In other words, I am advocating a “Slow Ban” – but a total ban just the same.

One possible variation is to take a constitutional literalist interpretation and say that flintlocks and wooden bows and swords are legal for carrying. As a fan of blade arts, I think it’d be excellent. But it might be simpler to just go with an outright ban.

Seriously, though –
Q: do you know how to do a mass shooting with a flintlock?
A: You start with Napoleon’s Grand Armee…

For people who still want desperately to play with guns, there’s another alternative. I was USAR not NG, but they seemed pretty well-regulated even back in the 1980s. Sign on the dotted line and you’ll not only get to learn to shoot a gun, you’ll learn to assemble it blindfolded, and you’ll learn what “war crimes” are and how to respectfully disobey an unlawful order, and you’ll get to board ahead of everyone else on certain jingoistic airlines.

So this leaves me with the question of what to do with my guns. I have a few. I collected them back when  was in an acquisitive phase of my life. So, if I were to sell them, I have the problem that they could eventually fall into the hands of someone irresponsible and they could kill someone.*

I’m going to put my money where my mouth is and put a codicil in my will that upon my death my executor will arrange to have them torched apart with an oxyacetylene torch and turned into a sculpture. I’m sure some artist will be thrilled. I ran this idea by a friend of mine who said, “that’s going to make the ghost of Wayne LaPierre come screeching out of the grave in broad daylight!” Savor that image for a second.

From my cold, dead, hands.

Here’s another post [stderr], addressing the “but what if the government gets oppressive?!!?!” meme. I will also address the “but what about disarming the pooooliiiice!?” meme in its own posting. So please let’s not drag that into debate here. Thank you. Hint: logistics.