You should never touch or try to pet somebody else’s dog without asking for permission. This ought to be obvious. This ought to be common sense. Yet so many people fail to understand it and harass me and my dogs whenever I go for a walk with my beloved fluffies.

Two days ago I went to a park with three dogs, two adult Pomeranians and a 3.5 months old Pomeranian puppy. I was teaching the little one how to walk on a leash.

I noticed a group of children in front of me, they were walking in my direction. There were approximately 20 children who appeared to be about five or six years old. They were accompanied by two adults who were presumably their kindergarten teachers.

Upon noticing these kids, I turned to a different path so as to avoid walking past them. The group of children took the same turn as I did and started following me. Then I walked on grass away from the path. At that point kids who until then had walked on the paved roads all started running on the grass after me. Then I grabbed the puppy in my arms and started running away from the kids as quickly as I could while yelling, “My dogs can bite.”

This incident with both irresponsible kindergarten teachers happened in the morning. In the evening of the same day I took outside four dogs. While one of my dogs was peeing, an adult man approached me from behind. I only noticed him when he stretched his arm to touch one of my dogs. Said dog freaked out and started barking angrily at this man who seemed scary for him.

A while ago my mother was in a public park walking with four dogs. An unaccompanied child approached her. My mother walked away. The child followed her, basically chasing her. Dogs got scared of this child, they started pulling their leashes and barking angrily. The child kept following my mother. Dogs kept angrily and frantically pulling their leashes and barking at the kid, injuring their necks in the process. It is fair to say that the kid was harassing my mother who is an elderly person and could not outrun a child. Finally, my mother got sick of this. She released one of the dogs from his leash. She knew that this dog won’t bite, he will only run around this child, barking angrily.

At that point the kid got scared and his mother finally showed up. She had been several hundred meters away and started running to finally pick up her kid. Finally. She sure took her sweet time. Oddly enough, the kid’s mother got angry at my mother and threatened to call the police. Indeed, local laws state that in public parks dogs must be on leashes at all time. But laws also state that parents are obliged to always look after their kids. By letting her kid wander around and harass other people, his mother was also breaking the law. When my mother threatened to inform the police about how this woman had failed to supervise her child, she finally went away together with the kid.

Scaring the shit out of a child by letting an angry dog run around him is a bit nasty. But this kid’s mother had asked for it by failing to teach him that it is wrong to harass other people or their dogs. The whole situation had escalated to the point where my mother had little choice, because she couldn’t outrun this kid and he was having fun while he intentionally provoked our dogs and amused himself watching the angry dogs get hurt by frantically pulling their leashes.

(Yes, dogs can injure their necks while frantically pulling their leashes, they usually cough afterwards. Nowadays we no longer use neck collars, instead we use dog harnesses, because too many people thought that it is fun to intentionally provoke our dogs and watch them freak out, get scared, and bark angrily.) 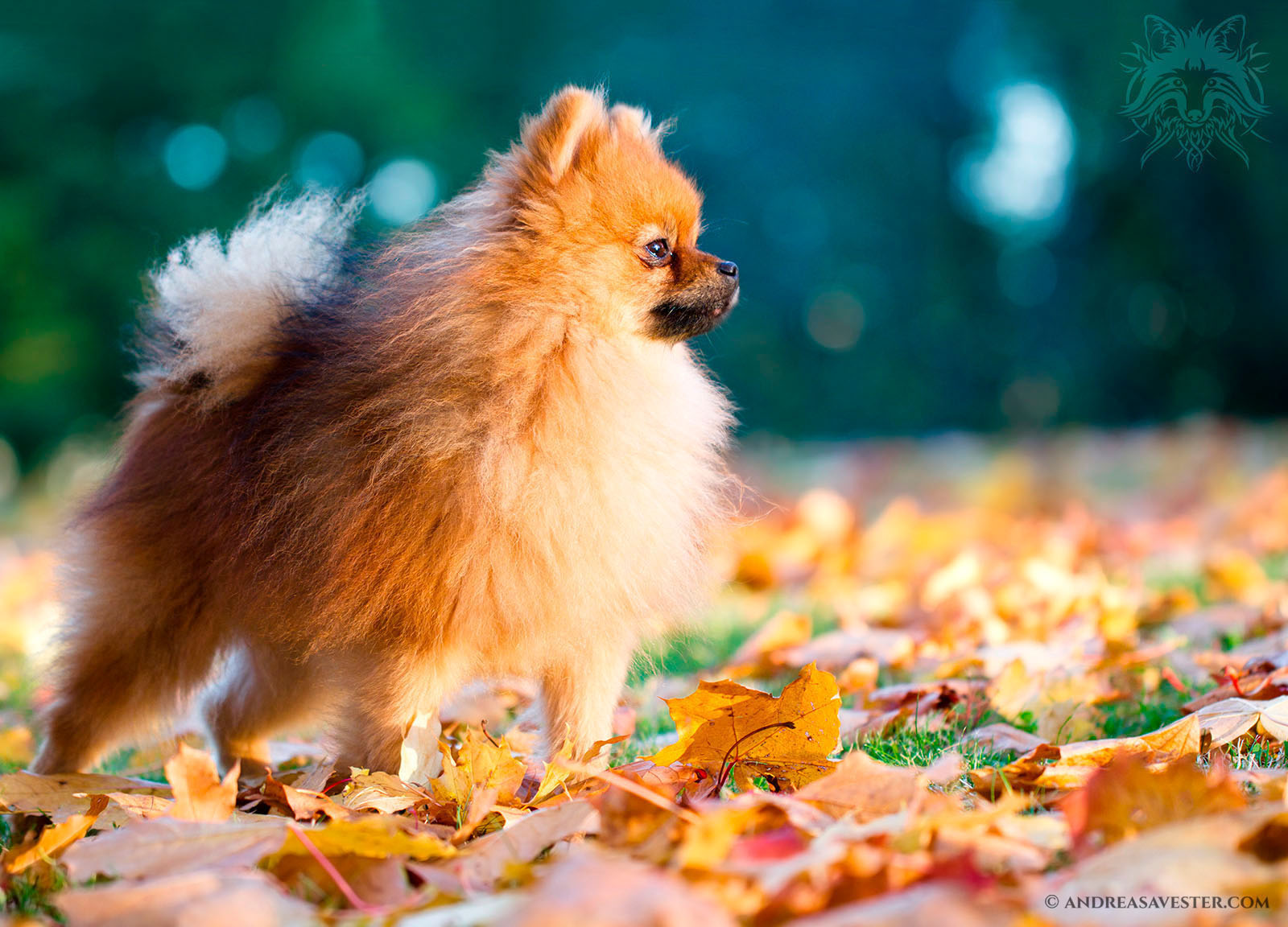 This is Khan. The hero of this story. He is all bark and no bite. When scared, he runs around the frightening person or dog, barks angrily, but never gets close enough to be touched or bite. 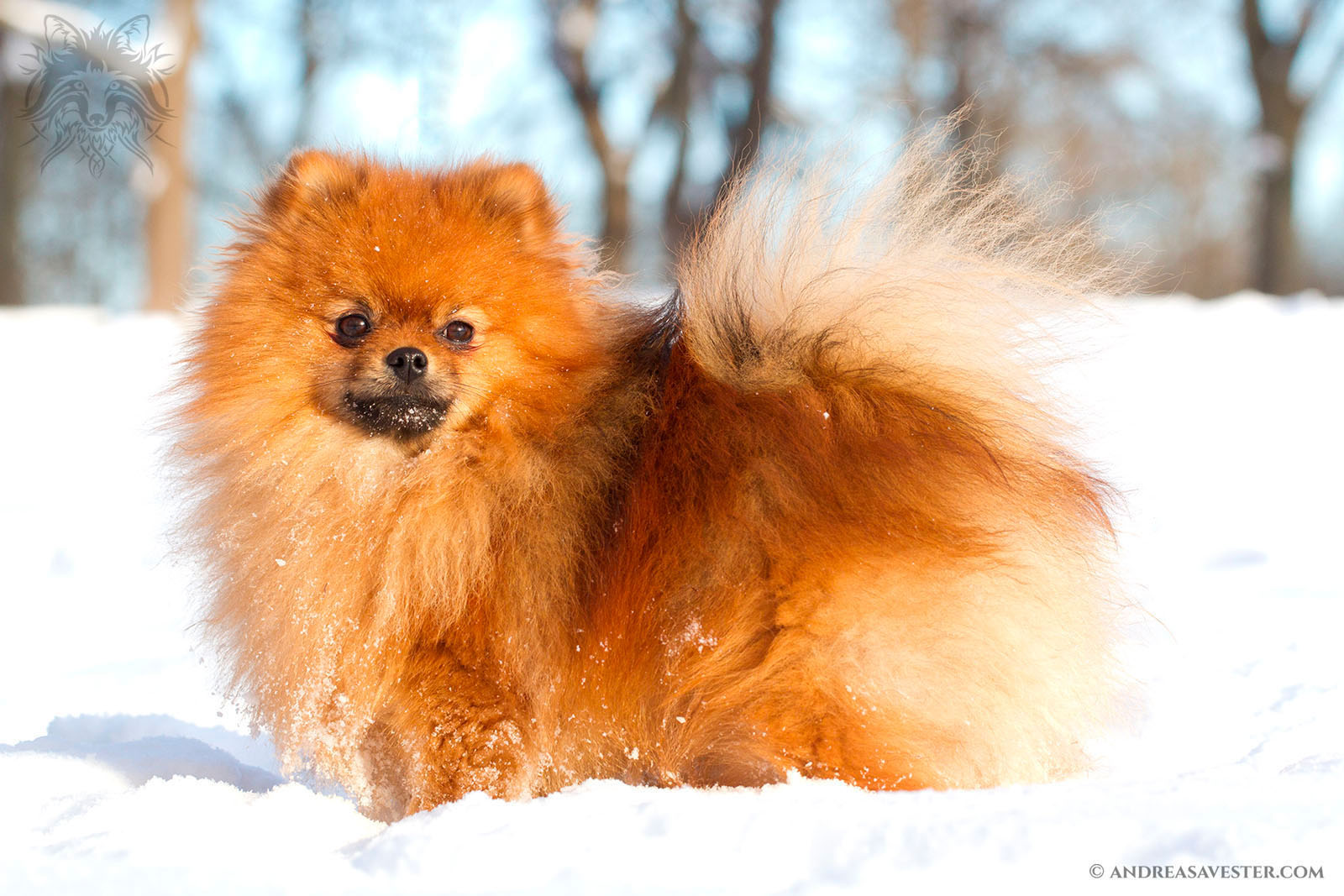 He is such a pretty boy, isn’t he?

I have intentionally trained my dogs to be cautious of strangers. Some people have tried to kick my dogs, thus I don’t want them to be too friendly with strangers. It’s better for them to be moderately cautious. They aren’t inherently afraid of strangers. When approached correctly (slowly, from the front, without waving hands or yelling), they won’t get scared.

But imagine yourself with the body of a tiny dog. Everybody is bigger than you, everybody can hurt you. My dogs can be easily frightened by strangers who act inappropriately. When a dog gets frightened, they try to defend themselves. With their fangs.

One of my dogs, Shira, the one who is the greatest coward among them all, has bitten people before. In both cases she lightly bit people’s legs. She wasn’t clenching her jaws with full force, those were closer to warning nibs. But still, on one occasion she managed to bit a person strongly enough that there was a bit of blood.

Yes, Pomeranians are cute, fluffy, and absolutely adorable. But they also have sharp fangs. And plenty of jaw strength. They can destroy bones that I give them for dinner. They can also destroy wooden furniture.

I was once bitten by Shira. Two dogs started fighting, I tried to separate them, my dog accidentally bit my arm (that bite was aimed for the other dog, my arm just got in the way). Two years later I still have a faint scar. 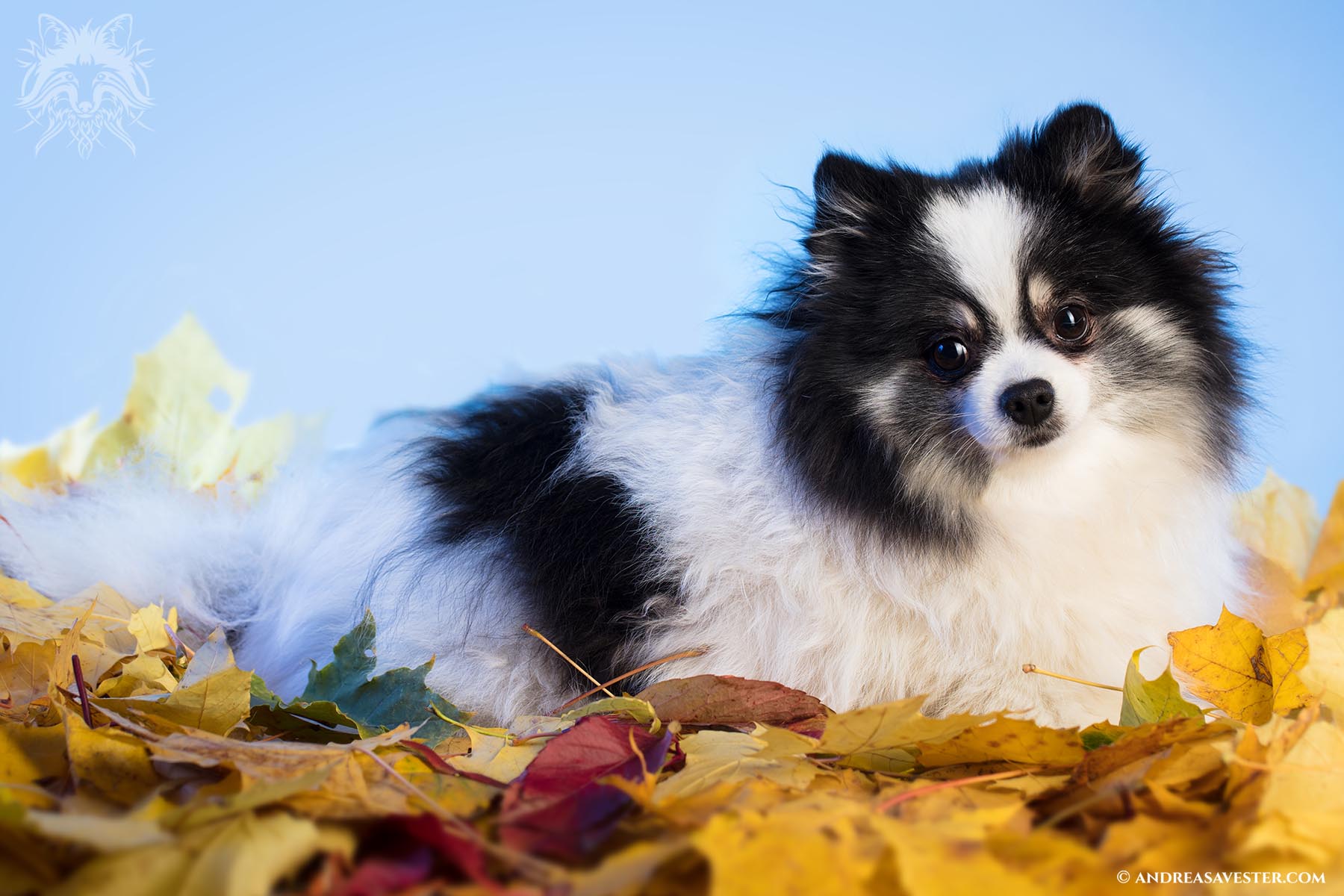 This is Shira. She’s the one who bit me and has bitten also other people. 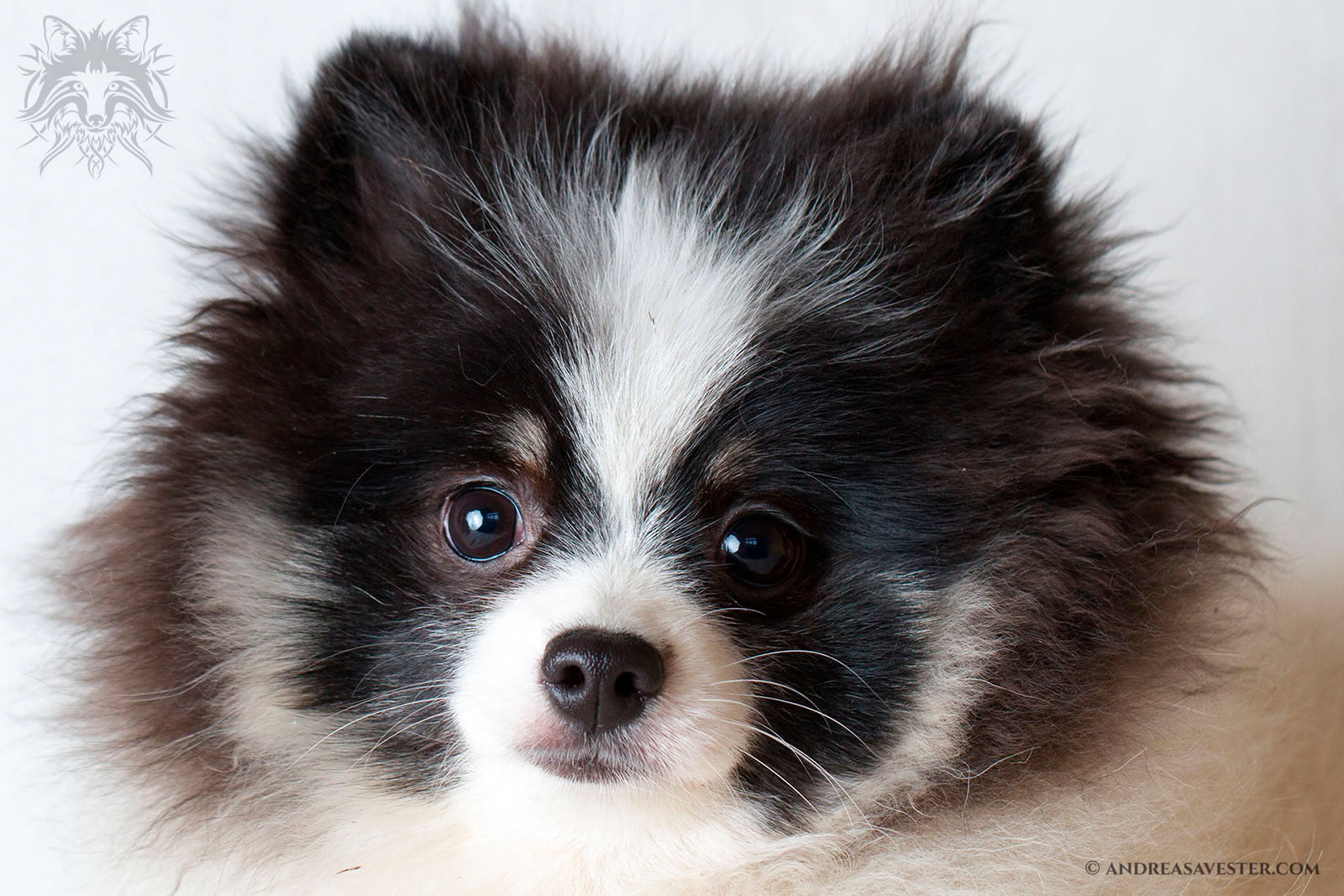 Here’s a photo of Shira from back when she was an adolescent. She is cute, fluffy, and adorable. And she is also a total coward who easily freaks out. 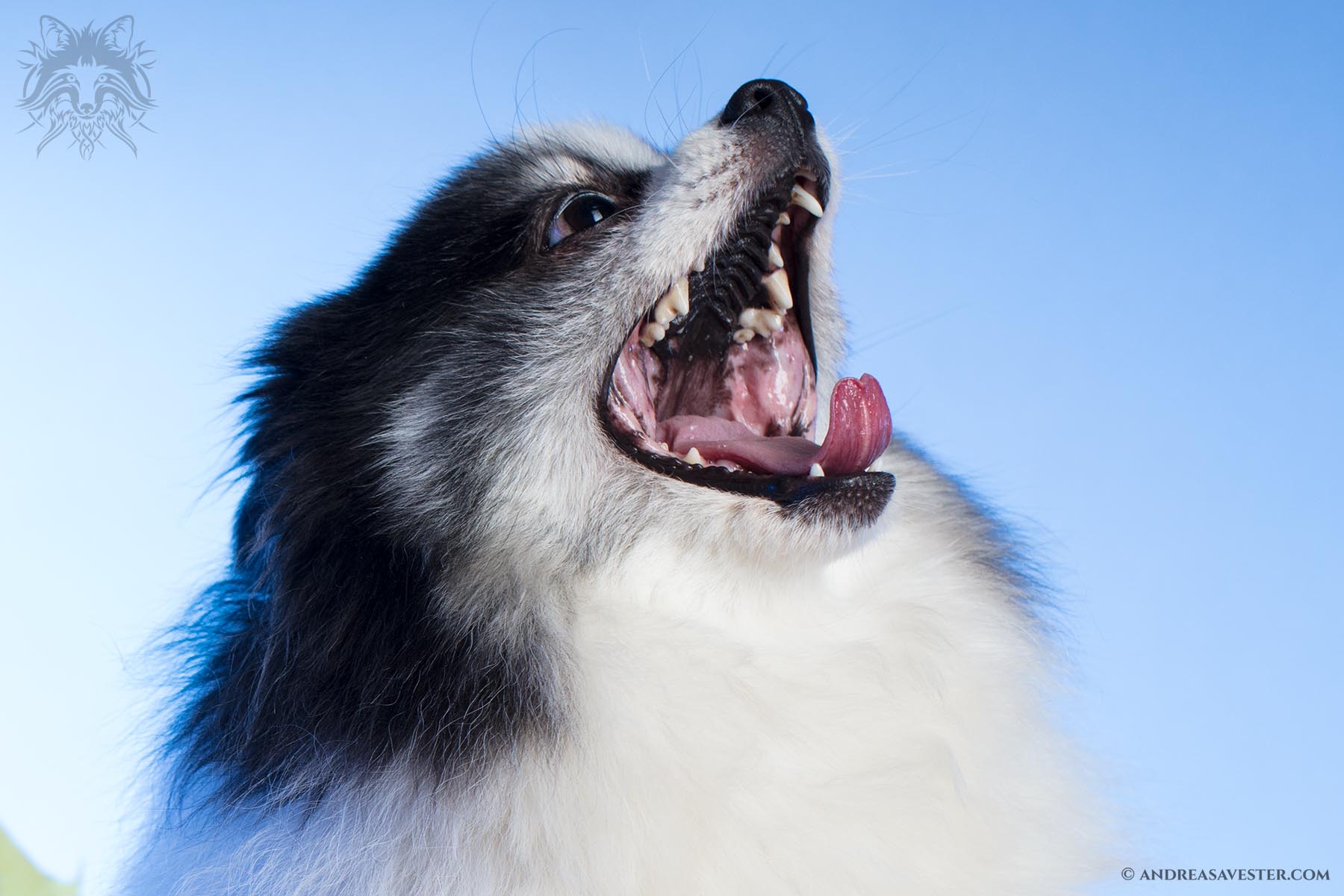 And she also has some sharp teeth.

By the way, I know a person who almost lost her finger after being bitten by a Pomeranian. In order to save her finger she needed a minor surgery and a prolonged antibiotics course.

Dogs of any breed can be dangerous and can bite. It doesn’t matter how cute they look.

Local laws state that dog owners must make sure that their dogs don’t bite anybody. That’s a reasonable law. After all, I wouldn’t like to get bitten by some random dog while being in a public park. I know from prior experience that one of my dogs can bite in the wrong circumstances (if she gets scared by strangers). Thus, in order to make sure that nobody gets injured, I try to stay away from people. My dogs are on leashes and I always walk far enough from strangers so that my dogs cannot reach them. This is safer fro everybody—people cannot get bitten and my dogs cannot get kicked by the occasional asshole.

But no, some clueless assholes try to sneak on me, approach me from behind, even run after me so as to grab my dogs without my permission. And when such an asshole gets bitten, then they blame me, even threaten to call the police on me. If one of those kids had gotten bitten two days ago, I bet that those fucking kindergarten teachers would have blamed me for it. They would have conveniently forgotten that I walked away from the children or that they allowed these kids to run after me. I also bet they would have asked me for financial compensation. Fucking assholes.

Somehow it’s my job to make sure that my dogs don’t bite anybody despite the fact that assholes routinely try to touch my dogs without first asking for permission and when shit happens it is somehow always my fault. According to these assholes, I am a free petting zoo, they have a right to do with my dogs whatever they want, and I have a duty to ensure that my dogs don’t try to defend themselves from the scary stranger.

Of course, I do not blame children. They cannot know any better if they haven’t been taught that it is dangerous and wrong to touch a dog without permission. I can even understand the occasional clueless and irresponsible parents. Some parents are terrible at parenting. But what were those kindergarten teachers doing? Where I live one cannot work as a teacher without first getting appropriate education. Did they miss classes on that day when they were supposed to learn about how to ensure children’s safety? Everybody knows that kids often get bitten by dogs. Usually this happens because a child cluelessly and carelessly tried to approach some dog they weren’t supposed to touch.

When people try to approach me, I always say that my dogs can bite. Whenever that happens, often people state that this is impossible, because this dog breed cannot possibly bite, and then they go on to try to touch my dogs anyway. In such cases I start yelling every rude insult I know. If I cannot convince some fool that my dogs aren’t friendly towards strangers, then my next best bet is to convince this person that the dogs’ owner is a rude lunatic. This usually works to get people back off away from me. Normally, I never raise my voice and I rarely use rude insults. Nowadays, interacting with people who try to touch my dogs has become the only occasion when I have to do these things, because otherwise some people simply do not get that no, they cannot harass me or my dogs.

But fine, let’s put aside the risk of injury for a moment. I also happen to believe that I have a right to decide whether I want to interact with some child (or adult) or no. I have no obligation to entertain some stranger’s kid for free and against my will. I am nobody’s free babysitter. Training a dog to put up with all those silly things kids tend to do (like pulling a dog’s tail) is work. Supervising a safe interaction between a child and a dog is also work. I do not enjoy the company of children. A child might enjoy petting my dog, but I would not enjoy said experience. For me it would be unpleasant and stressful. And I do think that I have a right to say “no” when some kindergarten teacher wants me to entertain her kids for free.

Conclusion: Some dogs are very friendly, never bite anyone, and are happy to interact with strangers, including children. Some humans like kids and are generally OK with strangers touching their dogs. If you see a cute dog you want to pet, approach from a safe distance and ask the owner for permission. If the dog’s owner refuses, then respect their decision. And if an owner of some dog (or dogs) turns around and starts to walk in the opposite direction upon spotting you, then that’s a “no.” Don’t run after this person. That’s harassment and a health risk.